Contact Group Meets on Kosovo′s Future as Tensions Rise | Europe | News and current affairs from around the continent | DW | 25.07.2007

The Contact Group met in Vienna Wednesday to discuss a negotiation framework for the future status of Kosovo as apprehensions at the UN and tensions in the Balkans threatened to turn the current stalemate into a crisis. 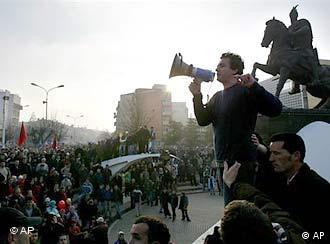 One week after Russia blocked a binding resolution on the fate of the Serbian province of Kosovo, the Kosovo Contact Group Wednesday opened talks to prepare an August restart of negotiations.

Meeting at the German embassy in Vienna, officials from the US, Russia, Germany, France, Britain and Italy attempted to overcome the US-Russian deadlock over the UN plan to grant Kosovo internationally monitored independence and to find a new format for talks.

EU foreign ministers had decided Monday to limit new talks to 120 days and hold them within a smaller format to make them more effective. Germany suggested a troika of the EU, Russia and US to lead the negotiations.

In a surprise move, Russia agreed on the troika format suggested by German Foreign Minister Frank-Walter Steinmeier at the EU foreign ministers' meeting on Monday.

Moscow has previously said it is against moving Kosovo negotiations away from the UN Security Council, where it, along with the four other permanent Council members, has the ability to veto any resolution tabled, and President Vladimir Putin on Tuesday had again rejected talks on Kosovo's independence, fearing this could create a precedent for secession in other regions. 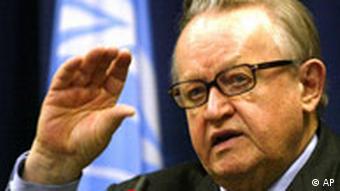 Ahtisaari leaves with his plan blowing in the wind

Meanwhile, the UN's special envoy to Kosovo, Martti Ahtisaari, said Wednesday he regarded his mission as over, saying, "My work is done."

The 70-year-old former Finnish president and career diplomat had previously said he would not prolong his engagement if either Kosovo or Serbia blocked the process towards determining the break-away province’s status.

Ahtisaari has said neither the UN nor the Contact Group had asked him to continue mediations in the face of Russia's persistent refusal to support independence for the Serbian province.

He has, however, said he would be willing to take on "a role as consultant" if requested.

Ahtisaari’s mediating efforts had been repeatedly criticized by Serbia and Russia as being partial towards the Kosovo side.

In January, after a year of talks between Serbia and Kosovar Albanians, he presented a proposal granting internationally monitored independence to the province. This was rejected by Moscow and Belgrade.

Continuing this stalemate, Russian Foreign Minister Sergei Lavrov had said on Tuesday that Ahtisaari's roadmap was no basis for new talks. For the US, however, the UN plan is not negotiable.

The southern Serbian province had been under UN administration since NATO forced Serbian troops to withdraw. 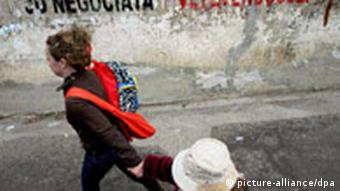 "Self governance" is the priority for Kosovans

Kosovo's ethnic Albanian majority, frustrated by setbacks and delays, will accept nothing short of full independence. Belgrade is only ready to grant far-reaching autonomy, fearing Kosovo's Serb minority will be endangered in case of independence.

A unilateral declaration of independence by the province's leadership could lead to a further destabilization of the region, diplomats fear.

While the US indicated it may recognize the country, Secretary of State Condoleezza Rice also warned Kosovo's leaders not to short-circuit diplomatic efforts. Kosovo's political leaders have issued contradictory statements as to whether the province would unilaterally declare independence.

"I think, given where we are in the diplomacy, it's unlikely that we will get full agreement," US State Department spokesman Sean McCormack told reporters in Washington. "But it is our belief -- and the shared belief of many -- that, in the absence of that end point, independence for Kosovo, that you are actually going to see an outbreak of further violence in the region, which isn't good for anybody."

Fearing that Kosovo would push forward alone as the stalemate continued, the parliament of Serbia overwhelmingly voted late on Tuesday to back the government's resolution to reject any move to grant independence.

The resolution says the government will "respond promptly and energetically" to any indication of unilateral recognition of an independent Kosovo, but the draft gives no details on measures the government should take.

"Serbia will reject any attempt by (Kosovo) Albanians to unilaterally proclaim independence," Serbian Prime Minister Vojislav Kostunica said, adding that "any state that wants normal and friendly relations with Serbia must respect the UN charter, which guarantees that the internationally recognized borders cannot be altered."

However, Aleksandar Vucic of the hard-line nationalist Serbian Radical party accused the government of being "too meek" and demanded a break of diplomatic relations with any state recognizing an independent Kosovo. His party leader Tomislav Nikolic called on the government to give up its plans for Serbia to join the European Union and NATO and "use all available means to defend our Kosovo." 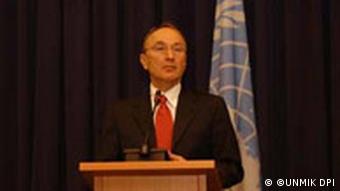 Rücker warned that Kosovars are reaching their limit

Elsewhere, the UN governor in Kosovo, Joachim Rücker, returned to Pristina after meeting with the EU foreign ministers this week and admitted that he had issued the Europeans with a warning over further delaying a decision the people of Kosovo had been led to expect by last October.

"I stressed that there is a lot of anxiety and tension and people need and deserve clarity on status and also on the status process," Rücker told reporters. He called on the major powers to set a clear roadmap to the final status of Kosovo and end the increasingly frustrating wait for those who had lived under UN rule for eight years.

"It will be very helpful if we would have something like roadmap or timetable on the way forward, something more than just an announcement of the time of engagement," Rücker added.

An international troika of the European Union, Russia and the United States, should take charge of discussions on the final status of Kosovo, German Foreign Minister Frank-Walter Steinmeier said Monday. (23.07.2007)

Blocked by a Russian veto threat, supporters of a UN plan to grant independence to the Serb province of Kosovo ended their bid in the Security Council on Friday. (20.07.2007)

A US anti-missile defense system, pipeline politics, Polish meat, press freedom and Iran policy have all been issues in the disputes between the West and Russia ahead of the G8 summit. Statehood for Kosovo is the latest. (05.06.2007)