Posters accusing the pope of "beheading" the Knights of Malta have surfaced across the Italian capital. The order, recognized nearly a millennium ago, has been hit by a scandal centered on condoms distributed in Myanmar. 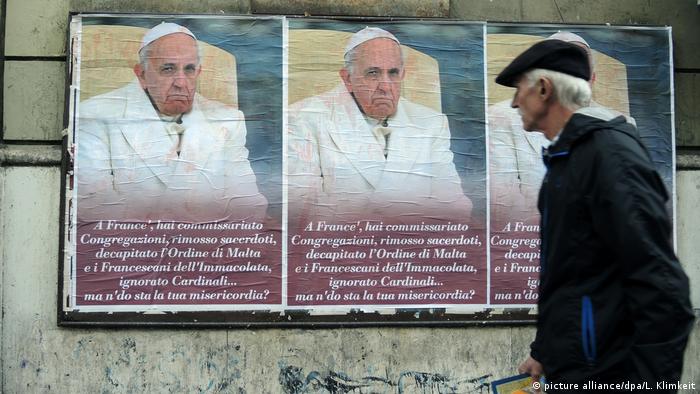 Vatican will take over Knights of Malta following condom row

Pope Francis requested Grand Master Matthew Festing to step down from the Knights of Malta. The decision comes during an ongoing argument between church liberals and conservatives over the use of condoms.

Opinion: Pope Francis wants change. But does the Church?

This much is certain: The pope has pushed the Catholic Church in a new direction. But which direction is it exactly? (17.12.2016)

Conservative criticism of Pope Francis intensified over the weekend when posters decrying the pontiff over a scandal within the Knights of Malta appeared across Rome.

The posters, plastered across the city between Friday night and Saturday morning, slammed the Argentine pope for several interventions at the order, including the "beheading of the Knights of Malta."

Authorities promptly covered the posters with the message "illegal advertising," signaling that they had been put up without authorization or the payment of a tax.

Police launched an investigation into Catholic conservative circles over the posters, which had been written in the working-class dialect spoken only in the area of Rome.

In a letter published Saturday, the pope told Archbishop Angelo Becciu that he would be the "exclusive spokesman" for the papacy until elections could be held in approximately three months time for a new grand master of the order.

"I delegate to you all the necessary powers to decide possible questions that might emerge in carrying out the mandate I have given you," the pope said.

The previous grand master had resigned following a month-long feud with the Vatican that centered around condoms distributed in 2013 during a charitable project in Myanmar.

The Knights of Malta is a Catholic order recognized by the papacy nearly a millennium ago, tracing its roots to the crusades. The order runs a vast humanitarian operation across the globe, with more than 100,000 staff members and volunteers, and enjoys diplomatic relations with 100 countries, including the Vatican.