A suspected robber has been killed while blasting open a condom dispenser in western Germany. The man was with two other accomplices. 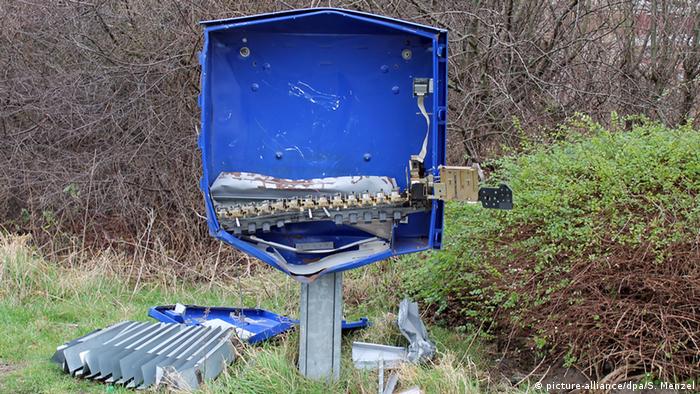 It emerged on Monday that at Schöppingen, a town in northwestern Germany, a bid by three suspects to blow open an automatic dispenser (pictured above) containing condoms and money had ended fatally for a 29-year-old on Christmas Day.

Despite sheltering in a get-away car, he was hit on the head by a flying piece of metal. The car's passenger door had been left open, police said.

Attempts to reanimate the unconscious man failed after his suspected accomplices brought him to hospital in the neighboring German city of Ahaus, near the Dutch border.

The dispenser was destroyed. Police found the wares and money still on the ground.

Polish police have begun investigating a fireworks explosion that destroyed five stands at a Polish-German island. Three people have been injured. (28.12.2015)

Three robbers have stolen 17 masterpieces from an art museum in Verona, Italy. Authorities have described the heist as a professional job targeting particular paintings by Tintoretto, Rubens and Mantegna. (20.11.2015)

An investigation of the Nord Stream 1 and 2 gas pipelines from Russia to Europe has strengthened suspicions of "serious sabotage" involving explosives that led to four pipeline leaks, Sweden's Security Service has said.