Communities being left behind in the fight for land in Uganda

In a Uganda forest reserve, green goals and community land rights are at odds. It's a story being played out across Africa, as investors scramble to lease and buy vast tracts. 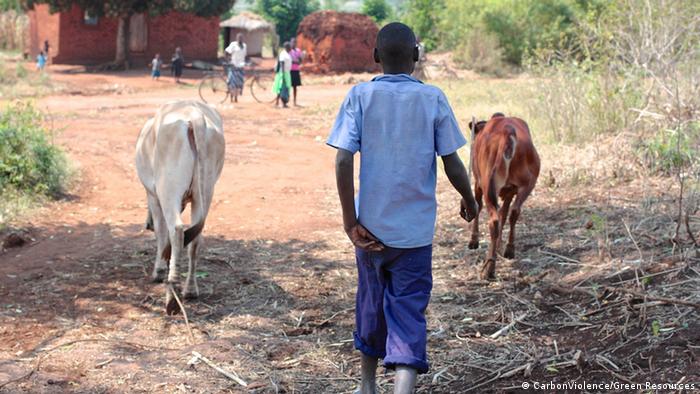 On the shores of Lake Victoria in eastern Uganda, villagers tend to crops and make repairs on their wooden, straw-roofed huts, while cattle graze near pine and eucalyptus trees. Not too far away, workers labor for a Norwegian-owned forestry company. The scene is deceptively tranquil.

Communities settled in and around the Bukaleba Central Forest Reserve say they are being deprived of the land they have worked and lived on since the 1970s, when they were encouraged by the Idi Amin Dada government to settle there.

The villages they established have not stood the test of time, or the hungry hand of profit. By the end of the 1980s, the administration of the day had begun to push people back off the reputedly degraded or underused land.

A 2014 study by Kristen Lyons and a team of researchers for the California-based Oakland Institute environmental think tank cites the real reason as clearing communities to make way for private forestry investors.

One is the Norwegian company Green Resources, which bought a 50-year lease for some 9,000 hectares in Bukaleba from the Ugandan government in 1996.

The company describes itself as Africa's largest forestry company, and has 45,000 hectares of standing woodland in Mozambique, Tanzania and Uganda. On its website, it touts its green credentials, saying it trades in wood from its own plantations - thereby easing the burden on natural forest. It also sells emissions reductions, which allows businesses and countries to offset the carbon they produce. But it's also being accused of land grabbing. 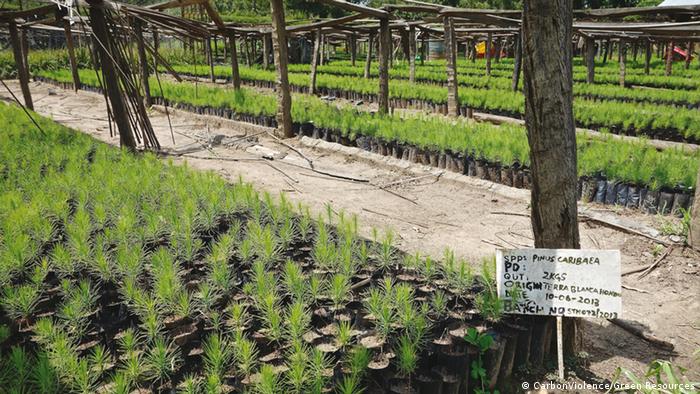 Lofty ambitions that miss the point

These eco-ambitions coupled with the promise of investing in local communities tint the venture with social and environmental benefits. But the reality has fallen short. "Many thousands of people not only lived on this land, but their livelihood activities were tied to it," Kristen Lyons, a professor of environment and development at the University of Queensland in Australia, told DW.

"When Green Resources obtained its lease in order to plant trees for carbon offsets, that subsequently meant these people could no longer access this land that was vital to their lives and livelihood."

She acknowledges that Green Resources has taken important steps, including providing medical supplies and providing education scholarships for girls, as well as distributing seedlings and allowing the community access wood for fuel from thinning and pruning.

But that, she said, does not address the more pressing issue.

"What we overwhelmingly hear from the people is that these things are good, but they are not actually what is urgently needed - and that is secure access to land and water," said Lyons.

She recounted stories from local land users of having being "chased away" and subsequently denied access to the sacred forest sites, medicinal plants, water and cattle grazing areas they had previously used. 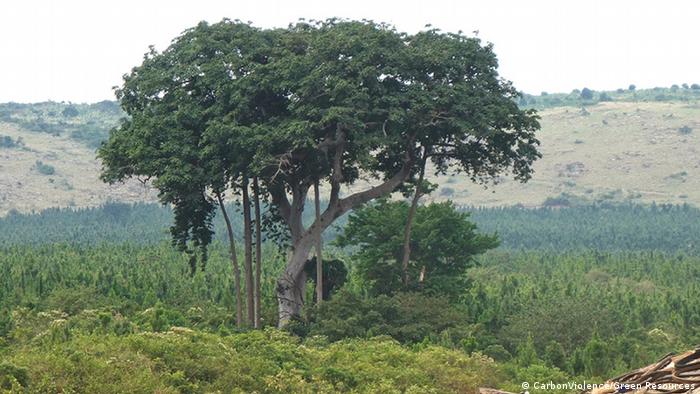 Communities complain that they have reduced access to sacred sites, such as the Walumbe Tree pictured here

Though these evictions began back in the late 1980s, community members told Lyons and her researchers that the practice continued during Green Resource's tenure. They say it is carried out by government employees, the army, and the police.

Some villagers say they've been evicted from their homes without warning - and at times violently. With nowhere else to go, they often end up in protected wetlands to graze their animals, which are then confiscated if they are caught. Impacts on their livelihoods are absolutely fundamental.

"I was growing crops - the security personnel allowed me to prepare my garden. And then when it was mature, and because there were no trees growing, they slashed it down," one woman, who withheld her name for fear of recrimination, told Lyons.

"I went to another rocky area on the hill to try to grow food, but my cassava dried up. Now I am living off the handouts from other neighbors in the village."

DW contacted Green Resources for comment on the report and whether they had addressed the issues raised in it, but had not received a response by the time of publication.

On its website, Green Resources says it did not carry out evictions. Rather that, in 2002, Uganda's National Forest Authority (NFA) removed any people left in the reserve, who had not adhered to a previous agreement to move peaceably.

The company added that it was not aware of anyone being injured during the process, and that it "fundamentally objects to violence" and would "in no way support … such activities."

Acknowledging it had made mistakes at Bukaleba, Green Resources also said it was continually working to improve its conduct and that it employs locals. The Oakland Institute says, however, that many quit in protest at working conditions. 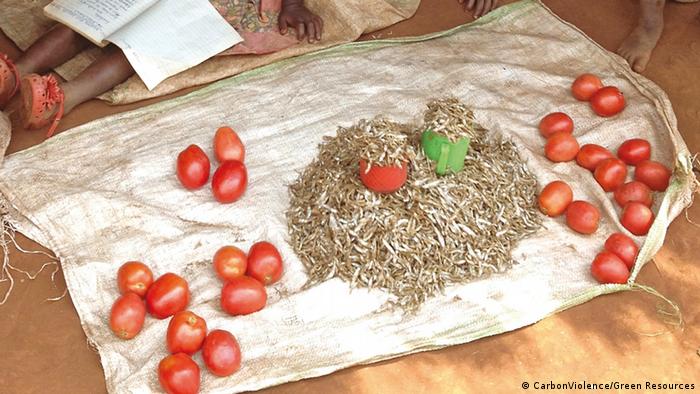 Land for local community use?

Some 500 hectares have been set aside for the community by the NFA, which granted Green Resources the original lease to establish and operate the Bukaleba tree plantation.

But when the Oakland Institute visited the area in 2013, villagers said they had not been able to access to the land, and that they were confused by its "changeable boundary" as well as about who is eligible use it.

A 2016 Reuters visit to the region similarly revealed the land was still not available to the local population.

On its website, Green Resources says the area officially belongs to the government, and as such, it is the "government's mandate to hand over the land."

The shareholder-backed company also says it manages the forest reserve in accordance with Ugandan law and international standards, which does not allow anyone to use the land apart from those licensed to do so for forestry purposes.

That would mean the land cannot be used for farming or grazing of livestock. Still, the company allows grazing in non-planted areas, which are clearly sign-posted, it says. 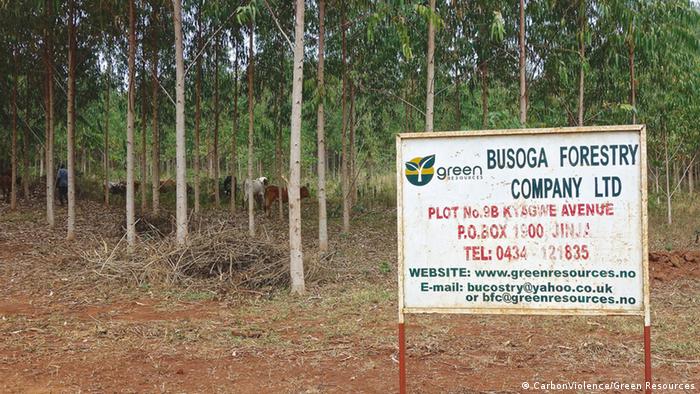 Similar stories regarding land ownership and use are playing out across Uganda and the rest of Africa. More than 66 percent of the continent's land is under customary tenure, and passed down within communities, according to "The Economist." Furthermore, lack of clear land ownership is directly linked to high poverty rates, says Oxfam.

In the absence of formal land titles that provide legal recognition to such communities, they are vulnerable to "land-grabbing" by foreign investors and governments seeking to extract resources or meeting rising demand for food and even biofuel.

Although accurate figures for land deals are difficult to come by, the Land Matrix - an online database of public land deals - says Africa is the most targeted continent for large-scale land acquisitions.

Most deals occur in sub-Saharan Africa, where taken altogether, an area the size of Spain is believed to be leased to foreign investors.

"Since the food and financial crisis of 2007 and 2008, we've seen a rush for land and land grabs for farming and extraction," Marc Wegerif, land rights policy lead at Oxfam told DW.

Investors are taking advantage by getting hold of large tracts of land at a cheap price, he said. "Basically, there's a commoditization of land where there is no functioning land market - and they are making large profits.

"This imposes certain threats to local people, including to livelihoods, and increasing conflict."

The Oakland Institute: The darker side of green

Reuters: Green: at what price?

Ugandan farmer: 'My land gave me everything. Now I'm one of the poorest'

Oxfam: Custodians of the land, defenders of our future