Former FBI Director James Comey has justified the leak, saying it was the only way to trigger a special investigation. In the memo, Comey said Trump asked him to pledge loyalty and stop investigating a senior official. 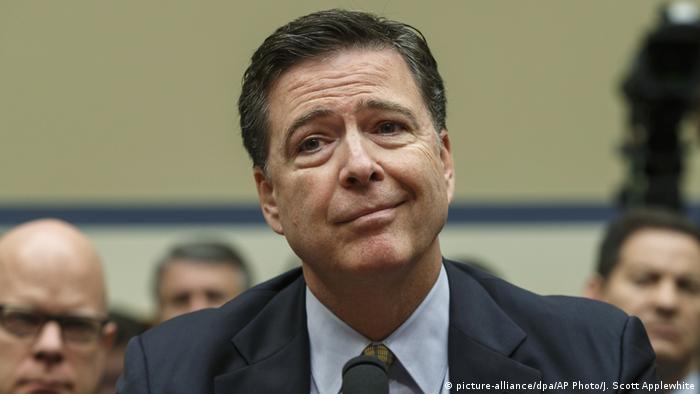 The US Justice Department's internal watchdog on Thursday said that former FBI Director James Comey had violated the Bureau's policies by intentionally leaking unclassified information to the media.

The department's Office of Inspector General said Comey handed over a memo about his interactions with US President Donald Trump to a friend and personal lawyer with the intention that parts of it would be shared with a specific reporter at The New York Times.

"Were current or former FBI employees to follow the former Director's example and disclose sensitive information in service of their own strongly held personal convictions, the FBI would be unable to dispatch its law enforcement duties property," said the Inspector General's report.

Trump fired Comey in May 2017 in support of recommendations offered by senior officials. However, the president later linked Comey's dismissal to a federal probe into collusion between Russia and Trump's presidential campaign.

Critics have accused Trump of obstructing justice by attempting to shut down investigations into his campaign's potential relationship with Russian elements. Robert Mueller, a former FBI director, was appointed special counsel to investigate the allegations of collusion a day after The New York Times article was published.

From memos to Russia probe

The memo leaked by Comey dealt with Trump's former National Security Adviser and disgraced military general, Michael Flynn. In the memo, Comey wrote that Trump had asked him to pledge loyalty and drop a federal probe into Flynn.

Flynn later pleaded guilty to lying to the FBI about instructing the Russian ambassador to the US to "refrain from escalating" the situation after the Obama administration sanctioned Russia for meddling in the 2016 presidential election. The White House had  declared 35 Russian intelligence operatives "personae non gratae" less than a month before Trump was to assume office.

Comey justified his handling of the memo, saying he had shared it with a reporter in the hopes that knowledge of its existence would trigger an independent probe into Russian collusion and potential obstruction of justice.

The president accused the central banker of being an "enemy" of the US, comparing him to Chinese leader Xi Jinping. Trump has been critical of the Federal Reserve not cutting interest rates faster or deeper. (23.08.2019)