Columbus statue beheaded in Boston, another toppled in Richmond

Anti-racism protesters in Virginia toppled a Christopher Columbus statue, set it on fire, and then threw into a lake, decrying the explorer as a symbol of genocide. Another Columbus statue was beheaded in Boston. 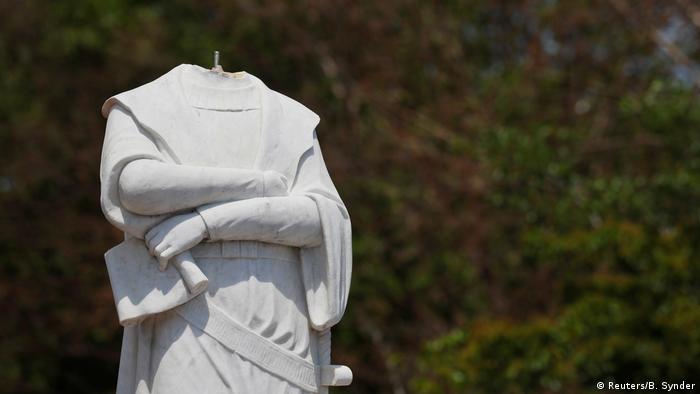 Two statues of Christopher Columbus, the explorer whose journey to the Americas linked Europe with the New World, were attacked amid wide-spread anti-racism protests across the US.

Authorities in Boston, Massachusetts, launched a probe on Wednesday after the statue of Columbus was beheaded. The head of the marble statue was found near the monument, in the Boston park that is named after the historical figure.

"We don't condone vandalism, and it needs to stop," said Boston Mayor Martin J. Walsh, adding that the statue had been targeted by vandals several times in recent years. However, he also said the authorities would remove the statue from the park and store it while reviewing possible restoration.

In 2004, the statue was marked with red paint and the word "murderer", while the slogan "Black Lives Matter" and red paint appeared on it in 2015, according to the Boston Globe newspaper.

The officials would take time to "assess the historic meaning of the statue" in light of the racism debate, Walsh told reporters, referring to the outrage sparked by the killing of African-American George Floyd.

Hours before, protesters in Richmond, Virginia tore down a different statue of Christopher Columbus, set it on fire, and eventually threw into into a lake. They also placed a sign reading "Columbus represents genocide" on the pedestal. 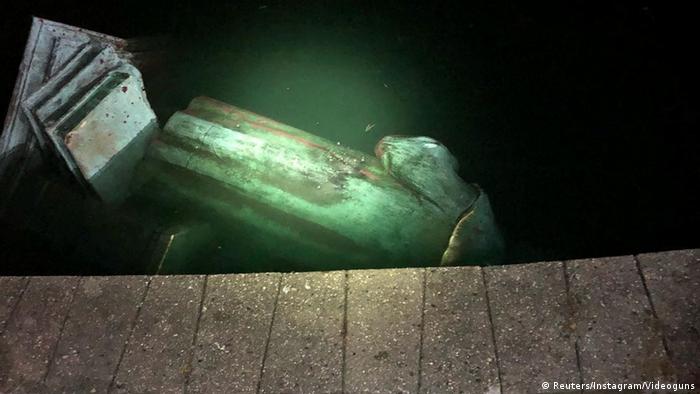 A statue in Virgina was torn town, set ablaze and dropped in a lake

Columbus has long been praised as a daring explorer and the discoverer of the Americas whose 1492 journey paved the way to the creation of the US less than three centuries later. In recent years however, more and more activists point to his enslavement, exploitation and bloody suppression of native Americans. Many view Columbus as the first of many European colonizers who conducted a centuries-long campaign of genocide and war against the native population. The calls to abolish Columbus Day, the US national holiday held in October, are also growing more prominent.

The attacks on the statue in Richmond comes only days after protesters toppled statue of General Williams Carter Wickham, a military leader who fought for the pro-slavery Confederacy in the US Civil War during the weekend. Other statues have also been targeted by protesters outside the US, including one dedicated to Bristol merchant and slave trader Edward Colston in the UK, and the statue of Belgian King Leopold II, responsible for the atrocities that claimed millions of lives in Congo, in Antwerp.

From Berlin to Barcelona, thousands of people are rallying against racial inequality and police brutality. The protest movement was denounced as "reckless" for ignoring social distancing rules. Follow DW for the latest. (07.06.2020)