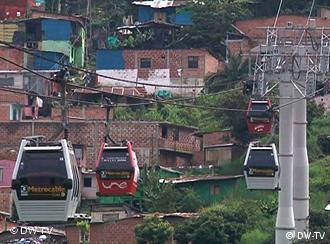 Medellin is the second-largest city in Colombia, and many of its suburbs line the steep slopes of the Aburrá Valley. Scenic as it is, the city is an urban planner’s nightmare. For many of the city’s residents, the journey to the center of town is a long and arduous one, involving crowded diesel buses and shared taxis negotiating narrow, hilly roads. But Medellin’s authorities have come up with an innovative solution: six cablecars that link the outskirts of the city to the center.

A film by Alexa Meyer and Patrick Benning

UK heads to polls in array of elections, including key Scotland vote