With a narrow majority, Colombian voters have rejected a peace deal between the government and Marxist FARC rebels in a surprising upset. Colombia's president has said a ceasefire agreement will remain in effect.

Colombians have rejected the historic peace deal between the state and the rebel Revolutionary Armed Forces of Colombia (FARC) by a narrow margin, according to results from exit polls on Sunday.

With 99 percent of polling stations reporting, 50.24 percent of the ballots voted against the peace deal's ratification, while 49.75 percent voted in favor - a difference of less than 59,000 votes out of 13 million tallied.

Opinion polls taken prior to Sunday's referendum predicted that the "Yes" vote would win by a two-to-one margin.

The referendum asked citizens to cast a simple "Yes" or "No" vote on whether they supported the accord signed last week between President Juan Manuel Santos and the rebel FARC commander known as Timochenko.

Voter turnout was lower than expected, especially in areas along the Caribbean coast which largely favored the peace accord but were hit by heavy rainfall on Sunday caused by Hurricane Matthew.

Colombian rebels confirm victim reparations ahead of peace accord referendum

Colombia's FARC rebels have said they will forfeit their assets in order to pay victim's reparations. The announcement has come ahead of a nationwide referendum on the peace deal between rebels and the government. (02.10.2016)

Ingrid Betancourt: "I forgive my tormentors"

Colombia is poised to end 52 years of civil war. Ahead of the peace treaty between the government and FARC guerrillas, ex-hostage Íngrid Betancourt speaks exclusively to DW about reconciliation and the chance for peace. (25.09.2016)

President Santos addressed the nation on Sunday, accepting the referendum's "No" result in a highly anticipated speech. Santos said he would meet with all political parties on Monday to find a way forward with the peace process.

"I won't give up. I'll continue to search for peace until the last moment of my mandate," he said.

Santos' government previously said there is no Plan B if citizens vote to reject the accord, which was agreed after four years of negotiations. The Colombian leader was not required to call a vote to ratify the accord, and the referendum's results are binding.

For now, Santos confirmed that a bilateral ceasefire remains in effect. Both sides have said they do not want a return to hostilities.

FARC leader Timochenko said the group maintains "its willingness to use dialogue as the only weapon for building the future," speaking to peace negotiators in Havana, Cuba. He said FARC was committed to continuing peace efforts despite the referendum results. "Peace will triumph," he said.

The peace deal has divided Colombians, who fiercely resent the FARC. The Marxist group financed the longest-running conflict in the Americas using kidnappings and extortion, spreading a sense of terror throughout the country that persisted for decades.

Many believe the deal would spare rebels from facing jail time for their roles in the long, bloody conflict. Colombian authorities estimate the conflict, which began in 1964, has left 260,000 people dead, 45,000 missing and nearly 7 million displaced. 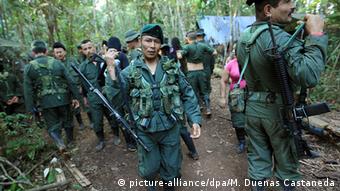 Many Colombians loathe the FARC, who used kidnappings and extortion to fund war efforts

"I voted no. I don't want to teach my children that everything can be forgiven," said Alejandro Jaramillo, 35, speaking with the Reuters news agency. He was upset that some of the rebels would not serve jail time. The accord granted amnesty for some FARC members, but not those who committed crimes such as massacres, rape and torture.

As part of the peace accord, around 7,000 of the remaining FARC fighters would have been allowed to reintegrate into society and form a political party. In a statement on Saturday, the group promised it would provide "material compensation for victims."

Influential former President Alvaro Uribe led the "No" campaign, arguing that the accord appeased the rebel group and set a bad precedent for criminal gangs to seize in the future. In the event that the voters decided against the deal, Uribe said the Colombian government should return to the negotiating table.

Santos, however, previously said that is not an option. FARC leaders, who opposed calling a referendum on the accord, have insisted that the peace deal is the best possible one for Colombia.

It remains unclear whether or not fighting will resume or if there are other options for the Colombian government to save the peace deal.

Had the peace accord been approved, FARC's remaining 6,000 fighters would have relocated to 27 designated areas to turn over their weapons to United Nations inspectors in a six-month disarmament process. That first step is expected to be shelved.

Sunday's results have rejected a deal which would have ended the country's 52-year civil war, effectively the last major open conflict in the Western Hemisphere.