Colombian police have seized the largest amount of cocaine ever confiscated in a single operation in the South American country. President Santos said the 12 tons of cocaine would have fetched $360 million in the US. 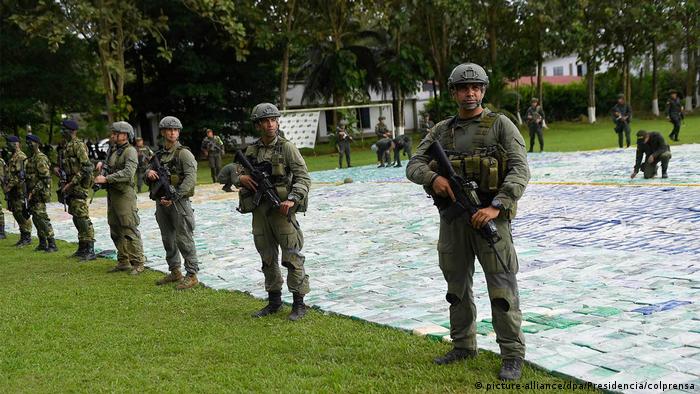 Almost 400 anti-drug police took part on Wednesday in air and land raids on four estates in the Uraba region in the northeastern department of Antioquia, police chief Jorge Nieto said, adding that the operation was preceded by a year of investigations.

"Never before, since we began more than 40 years ago to fight against drug trafficking, have we made a seizure of this magnitude," Juan Manuel Santos told reporters.

Police detained four people and were searching for Dairo Usuga alias Otoniel, head of the Gulf Clan criminal ring, believed to have stored the illegal drugs, which were discovered in underground caches.

The group emerged from the remnants of right-wing paramilitary groups that demobilized in 2006.

The illegal armed group that has sought to take over drug trafficking operations in zones previously occupied by the Revolutionary Armed Forces of Colombia, or FARC.

Santos has said there will be no let-up in his government's campaign against the Gulf Clan, after the capture of 28 members of the gang in an operation by security forces, code-named "Odyssey," in Antioquia in September.

The operation raised to 362 tons the amount of cocaine seized in Colombia so far this year, surpassing 317 tons in 2016.

The UN and the White House said coca and cocaine production surged last year in Colombia.

Colombian and Mexican authorities have seized two tons of cocaine disguised as printing chemicals. The narcotics were destined for the state of Sinaloa, home to one of Mexico's most prolific drug cartels. (08.09.2015)

Cocaine discovered among bananas in Berlin

Cocaine packed into seven banana boxes has been found at five supermarkets in the Berlin area. Police said the haul, worth an estimated 6 million euros, was probably due to a "logistical error" by drugs smugglers. (07.01.2014)