The world's top Arabica producers are suffering their worst crisis in over a decade after prices for their coffee fell below $1 per pound. They now want to sell their harvests without being tied to market prices. 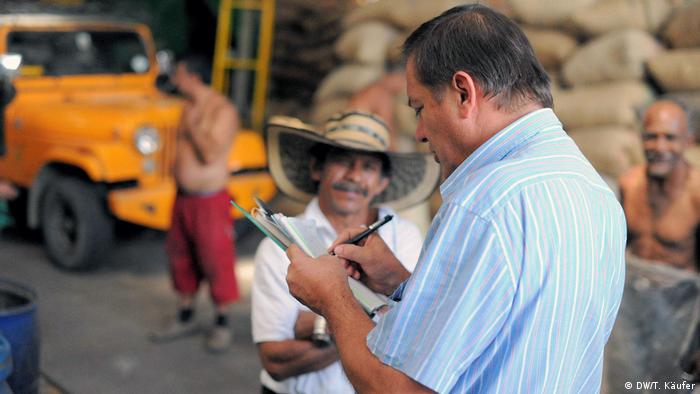 Colombia's National Federation of Coffee Growers (FNC) announced on Tuesday (Feb. 25) that it was exploring ways to sell its members' harvests at prices that at least cover their production costs.

FNC chief executive Roberto Velez told reporters in Bogota that the time had come for the country's growers to "think in a different way and sever the price of Colombian coffee from the market in New York" in order to receive a price that covers production costs and a profit.

In an interview for DW, Velez also appealed to large coffee buyers, insisting that Colombian growers were left "begging" as the industry gets rich.

"While the industry has probably had the best two years making huge profits, coffee growers, as the weakest links in the chain, are losing money. That is why we want prices to cover the costs; we are not saying we want prices of $4 or $5 for the pound," he says.

Roberto Velez and the FNC now plan to set the price for Colombian Arabica coffee beans at between $1.50 and $1.60 per pound, claiming the New York market for the commodities is too tied to Brazil's production and doesn't take into account growers in Colombia or Central America. 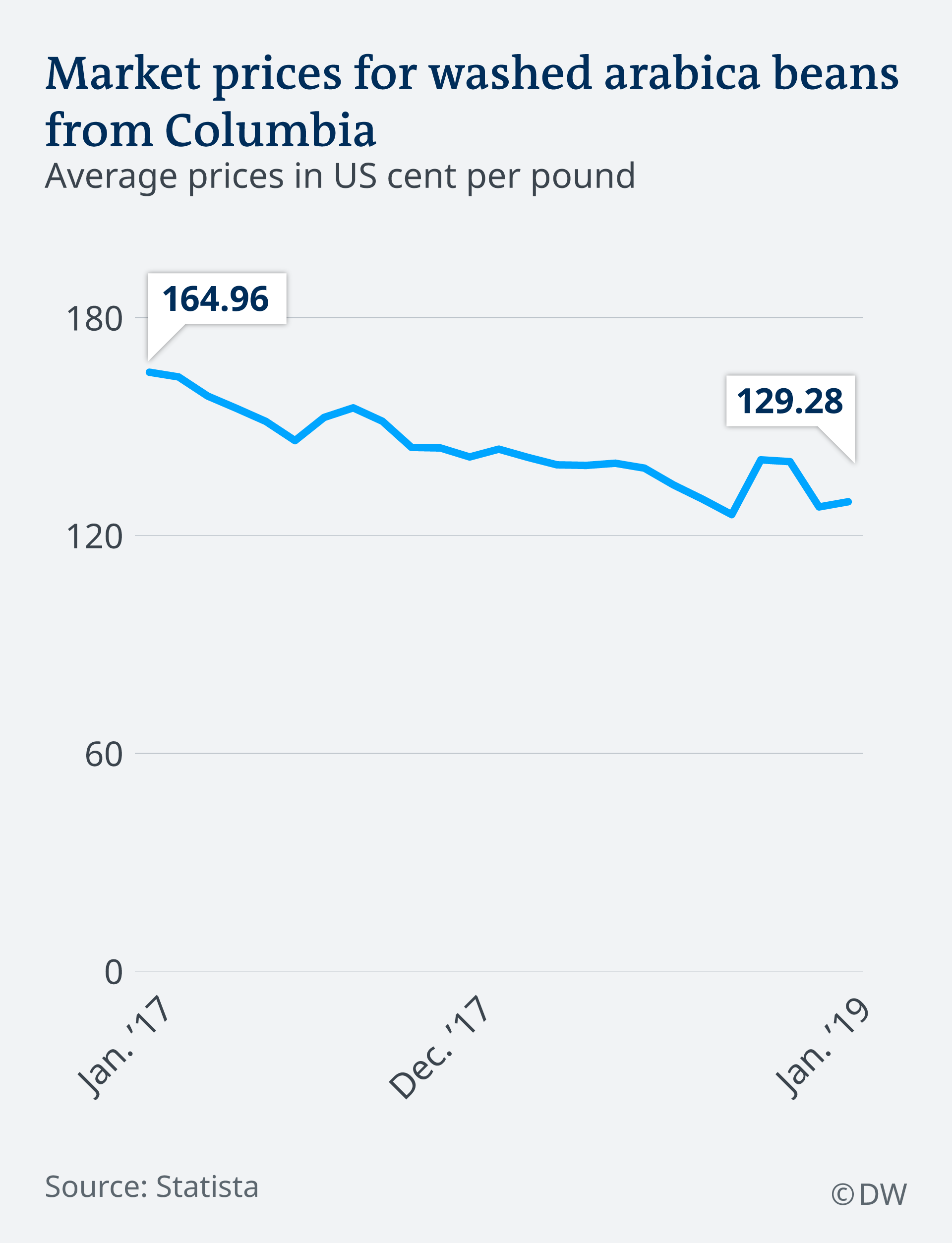 Colombia is the world's third largest coffee producer after Brazil and Vietnam. It produced 13.6 million bags of washed Arabica coffee last year, down 4.5 percent from 2017.

Around 540,000 families depend on coffee production, and their livelihoods are severely threatened after prices decreased from $1.50 a pound in mid-2016 to as low as $0.98 recently.

Part of the reason for the global slump is a bumper harvest in Brazil, which produced an unprecedented 62 million bags last year, according to the country's food supply agency, Conab.

Often referred to as the "Saudi Arabia of coffee" for its price-setting potential, Brazil in 2017 experienced a so-called "on" year of large production, which is traditionally followed by an "off" year of low output as the coffee plants recover.

Earlier this year, Conab said it expected production to fall to 53 million bags this year, which would still be a record output for an "off" year and likely to keep prices at the New York exchange low.

Moreover, as coffee is traded in US dollars, an ongoing fall in the value of the Brazilian currency, the real, which now trades at 45 percent below its 20-year average against the dollar, has boosted the country's competitiveness against rival producers in Colombia and Guatemala. 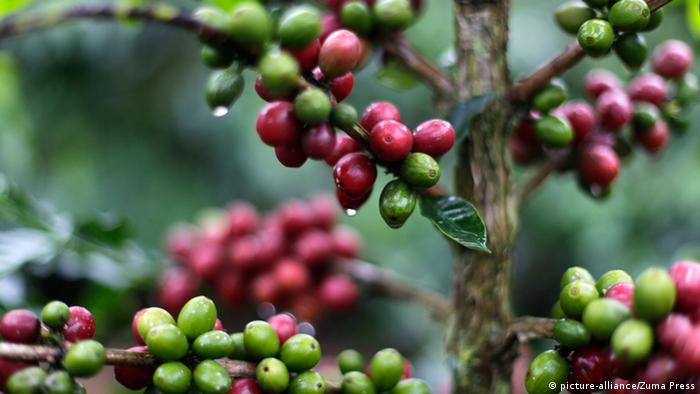 Brazil's Arabica crop has traditionally worked in cycles, marked by "on-years" of large production followed by a low output "off-year" harvest. The cycle is necessary to "rest" the coffee trees, restoring the nutrients needed for growth

The FNC's Velez also blames speculators in New York for the slump in coffee prices. He asserted that investment funds not related to the industry are in control of over 30 million bags of coffee in futures bonds.

This would create "fictional prices" because those bags don't actually exist yet. "Speculators increase and decrease the prices without any control and have made the downward move in prices even bigger," he says, adding that this financial speculation would threaten the existence of about 25 million coffee farmers worldwide.

Futures traders in coffee bought up contracts cheaply last year in the hope that prices would rise so that they could make a profit. Massive futures trading is taking place amid reduced incentives to expand supply in 2019, despite rising coffee consumption worldwide.

Soft drinks maker Coca Cola, for example, has made an audacious move into coffee outlets, buying UK coffee chain Costa for $5.1 billion in August last year. Nestlé, meanwhile, paid $7.15 billion for the right to market products from coffee store chain Starbucks, which is now expanding in China at a rate of one new store every 15 hours.

"You can't have everybody in the chain winning at the same time," he said, adding that growers may soon get a bigger piece of the action as coffee demand is set to rise by 50 million bags in the years to come. Dias and other market analysts expect coffee futures to average $1.24 per pound in 2019, up from $1.15 in 2018. 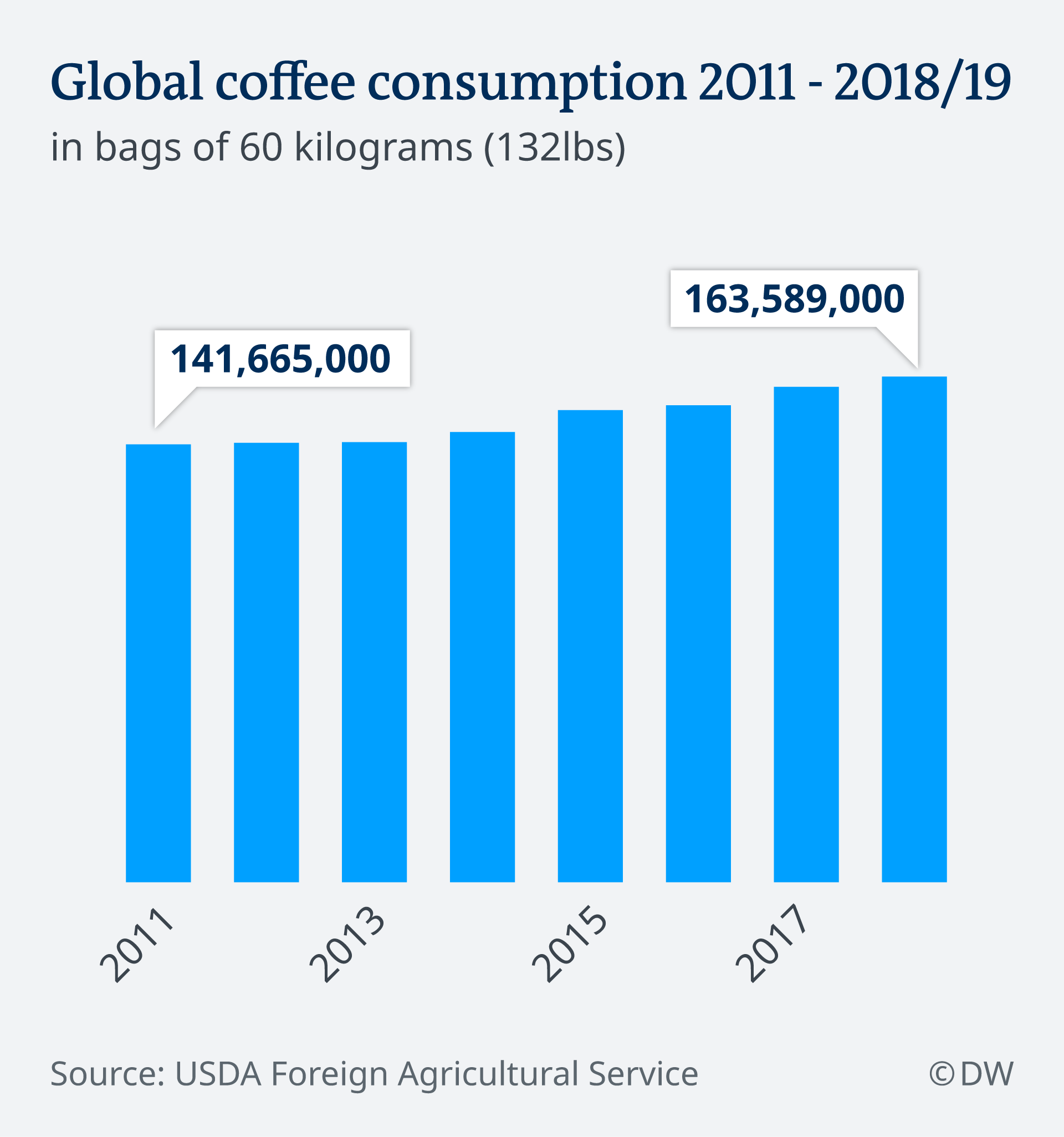 Meanwhile, development researchers have come to describe the unusual coexistence of a coffee consumption boom and a coffee crisis in producing countries as the "Coffee Paradox." The downward trend in producer prices started in 2011, becoming most dramatic in 2018 when prices fell below production costs.

At the same time, coffee shops and micro-roasters have become ubiquitous, with big multinationals buying up more and more coffee businesses, while small chains continue to enter the market.

The World Coffee Producers' Forum, which includes producers' associations from around the world, has called on companies to commit to buying coffee at more than the cost of production. It suggested that growers provide certification to roasters and retailers to prove to consumers they pay farmers sufficient returns.

Meanwhile, the Colombian government has announced it will reactivate more than $30 million in aid for growers to help them weather the storm. The funds were approved last year but not fully spent because of a brief price recovery in October and November. Under the plan, growers will receive a subsidy of $9.60 per shipment when the price is below 700,000 pesos.

Velez insists that subsidies from already financially squeezed Latin American governments cannot be the solution. "Asking money from our governments means our taxpayers are actually subsidising an international industry that is making tons of money."

The FNC head noted that Colombian coffee growers are well aware that they have exposed themselves to a risky position with their plans. Exiting the New York coffee market is still a risk, he said, but with the backing of more Arabica producers from other countries, he hopes Colombia's initiative will make a difference.