Colombia is becoming an online country, but a digital divide still separates cities from the countryside | #speakup barometer | Colombia | DW | 18.02.2019

Colombia is becoming an online country, but a digital divide still separates cities from the countryside

The number of people accessing the Internet in Colombia continues to rise. While city dwellers have greater opportunities for access, connectivity in rural areas remains challenging. 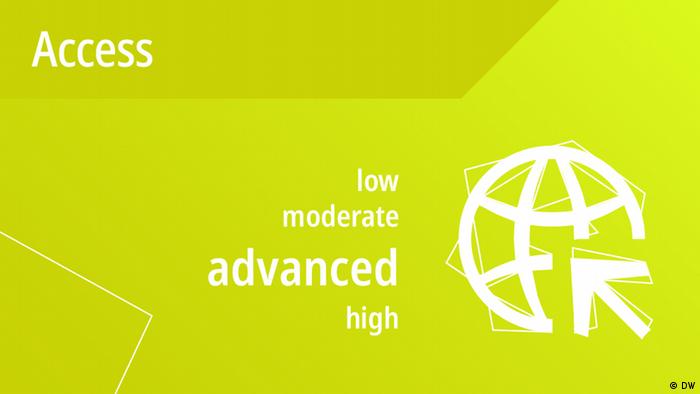 The overall level of of digital participation for Access: Advanced

— Internet usage has become relatively accessible for many people in Colombia
— Going online is still too expensive for part of the population, and service is often slow
— Especially in rural areas, access remains difficult
— The new government is promising to close the digital divide

Three times a year, the Colombian Ministry of Telecommunications (Mintic) publishes a bulletin with the latest numbers on Internet usage in the country. Those numbers are invariably announced as a success, as they are rising steadily. According to the latest bulletin, published in November 2018, Internet penetration has reached 60 percent, with more than half the total population accessing the Internet through their mobile phones. Five years ago, only 15 percent of the population had access to broadband Internet. Colombia is increasingly becoming an online country as the Internet becomes part of daily life for many in Latin America's third most populous country.

Looking at these numbers, it is clear that the country is on a positive trajectory. And it's not just the numbers: The connections themselves are stable – apart from the occasional power cut – and never disconnected.

This picture is backed up by organizations like the GSMA, which represents the interests of mobile network operators worldwide. According to its 2017 report, mobile operators invested more than $9 billion (€7.9 billion) in networks and spectrum since the start of the decade. "As a result, mobile broadband coverage in Colombia exceeds 90 percent for 3G, with 4G coverage expanding rapidly and now reaching nearly two-thirds of the population," the report states.  And although the transition from 2G to mobile broadband occurred more slowly in Colombia than in other Latin American countries, "the gap will substantially close by the end of the decade except in comparison with the regional leaders – Brazil in particular."

Nevertheless, the above-mentioned numbers are a bit misleading. There are huge differences in how people are able to access the Internet, and a hard-to-solve digital divide continues to exist, especially between cities and the countryside.

Internet access is getting cheaper, but not cheap enough for everyone 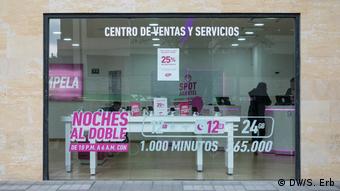 The cost of going online in Colombia has for a long time been high compared to other OECD countries. One reason for that is that a large part of Columbian Internet traffic is directed through the US. That being said, prices have dropped. Indeed, the "Affordability Report 2018" published by the "Alliance for Affordable Internet" ranks Colombia second worldwide and first in the region for demonstrating "regulatory certainty, market maturity, and good practices within the telecommunications sector that help enable affordable broadband prices."

In relation to average income, access to the Internet is still not cheap, at least not for all consumers. While a 30 Mbit landline connection is about $30 per month in the capital Bogotá, the same amount only pays for 2 Mbit in a small town. Connection speeds have improved in Colombia, but they are still slower than in other Latin American countries such as Chile or Mexico, where the average fixed broadband Internet speed is about 5 Mbps.

Today, most people in Colombia use the Internet on mobile devices, usually with prepaid contracts. 1 GB of data, for example, costs around $6.50. In comparison, the minimum wage in Colombia is about $260 per month.

Most network operators allow people to use WhatsApp and Facebook for free. This does, however, undermine net neutrality somewhat, as not all services are treated the same. Officially, net neutrality is guaranteed in Colombia, but there have been no known sanctions against the companies.

"There is not much competition, that's part of the problem," says Camila Perez, an economist and author of the report "Digital Colombia: Maximizing the Global Internet and Data for Sustainable and Inclusive Growth"

Claro, a network operator that belongs to Mexican business magnate Carlos Slim's empire, controls about half of the mobile phone market. Although the experts interviewed don't see that as a good thing, there are also no clear indications that Claro has misused its market position. Portability was eased some time ago, and it is now possible for customers to change their mobile provider.

Visiting Colombia today, it’s very common to see people holding a smartphone in their hands – a change from years past. It has become much easier to purchases the devices, too. A new Android phone (the most popular operating system), starts at about $60. These simple phones have recently been exempt from value added tax, making them cheaper to purchase. There are even better offers to be found on the second-hand market, but the devices there are often stolen, as cell phone theft is a huge problem in Colombia. The government has attempted to combat it by implementing a mandatory registration of the IMEI number, which allows for stolen phones to be detected. 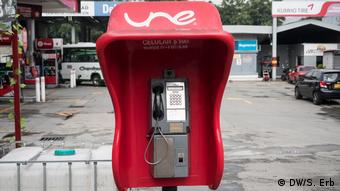 In Colombia’s bigger cities, people generally have access to a good 4G connection, and even if they've run out of data, the Internet is still accessible using free wifi hotspots in shopping malls, restaurants and public institutions such as libraries.

The situation in the countryside is different for several reasons. Colombia is a geographically diverse country, with huge mountains, distant plateaus, rainforests, and marshland. It is also only sparsely populated in many areas, making it difficult to build up the needed infrastructure. Furthermore, politicians as a rule tend not to show much interest in the countryside. The armed conflict that has strangled Colombia for decades also plays a role, with many regions not having been accessible at all until recently.

But there are plans to improve the situation. At the end of 2017, Mintic announced that 98 percent of municipalities are now connected to the Internet. It also underlined that 793 of the 1,101 municipalities now have access to mobile connections via 4G technology. While these numbers sound quite promising, in reality, the Internet connection is in the center of the town, established by fiber optic cable or satellite signal, and in most cases does not reach the places where people actually live, work and travel.

There have been various efforts to allow people to go online who don't have Internet access at home. One government-run project set up about 7,000 so-called "digital kiosks" in rural areas (which don't always work as they should). There are also several NGO initiatives that use different technological approaches.

What are the new government's plans?

The government of President Juan Manuel Santos, whose term ended in August 2018, put a great deal of emphasis on digitalization. Under the banner "Vive Digital" ("Live digitally"), the project included plans to adopt broadband coverage around the country. The new government under President Iván Duque promised to continue this process, with a sector policy for the next four years. Named "The digital future belongs to everyone," it aims to accelerate the closing of the digital divide. According to the government, a strong cooperation between the private and public sectors is necessary in order to connect 100 percent of Colombians.

At the time of publication, it is unclear whether this path will be successful, and if so, how quickly. By the end of 2018, the latest update was that most of the "digital kiosks" will only be in operation until July 2019, and that others have already been closed. 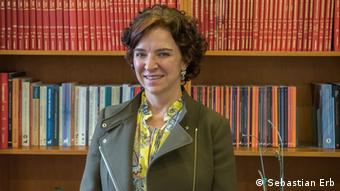 Camila Perez, economist and deputy director of Fedesarrollo, a think-tank in Bogotá

In recent years, Perez has seen enormous development in terms of the opportunity for people to use the Internet. "But there's great inequality. For people with fewer resources, it's much harder to go online." She emphasizes that connection speed is also a problem. For the 'Internet of Things,' a 5G connection is necessary. "That's one thing we expect in this term. It will happen.” 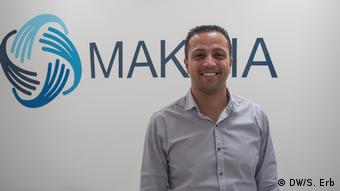 Gonzalez is satisfied with the Internet access in urban areas. For him, "the problem lies in the countryside and in the periphery of cities." He says a central task of the government is to ensure that people in remote areas are well-connected to the Internet. Since rural connectivity is unlikely to be in the commercial interest of private network operators, he sees it as an important government duty to provide it. 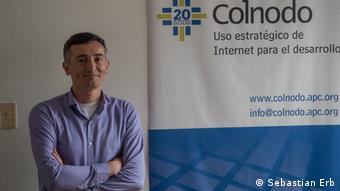 Ariel Barbosa, co-founder of the NGO Colnodo in Bogotá

For Barbosa, government provision of Internet access via public Wi-Fi hotspots in rural areas is largely positive, but he also criticizes it: “The connections of the free Wi-Fi hotspots are slow, and you have to register. You have to give your name, address and ID number to use the hotspot. Who manages this information? Do they analyze the data or not?” he asks. It is also unclear whether navigation histories are being stored.

— Improve access in rural areas
The most important measure in Colombia is the one that politicians have already recognized: ensuring that everyone has the opportunity to use the Internet. Access is most difficult for people living in remote rural areas. When the Internet is expanded, the government should also more clearly define what precisely they mean by "broadband" Internet, as information is often relatively vague. The government must also be more transparent in its published statistics. The fact that a municipality is online says relatively little about how many people truly have network access.

— Making mobile services more customer-friendly
It is relatively complicated in Colombia to decide between mobile Internet offers. In particular, cheaper deals are often rather customer-unfriendly (e.g. because credit expires quickly). Simpler, more transparent and cheaper offers are needed to make it easier for people with weak financial resources to use the Internet on the move.

— Strengthen net neutrality
At first glance, it appears to be positive that people in Colombia can usually use WhatsApp and Facebook, even without active mobile data. But upon further reflection, that access can create problems. People are becoming more and more dependent on the big global companies, who are trying to organize everything consumers need on their own platforms. This has a negative impact on the development of local alternatives and slows down the development of the national tech scene. It is also less likely that people will use (messenger) apps with stronger data protection settings. The Colombian government should therefore ensure that net neutrality is guaranteed, so that people have equal access to all Internet services.

The traditional media outlets in Colombia are owned by the country's elite, leading to a lack of critical reporting of those in power. That's an opportunity for newcomers – but securing funding remains difficult. (18.02.2019)

Colombia’s long history of violence is reflected in abusive online behavior that disproportionately targets women. Initiatives to change that have begun, but will likely take a long time. (18.02.2019) 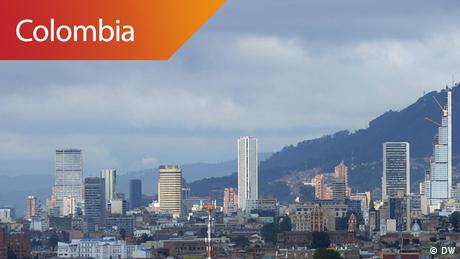 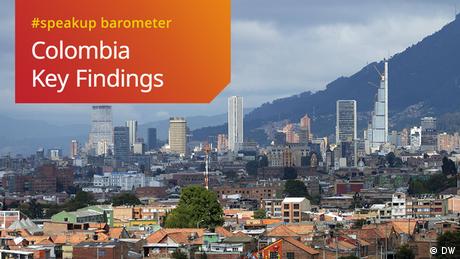 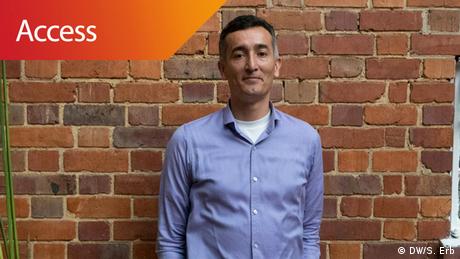 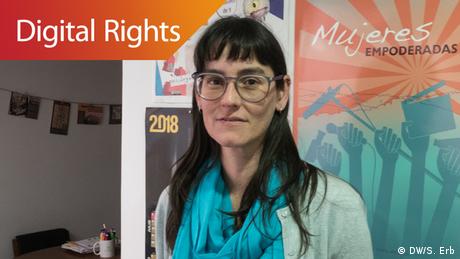 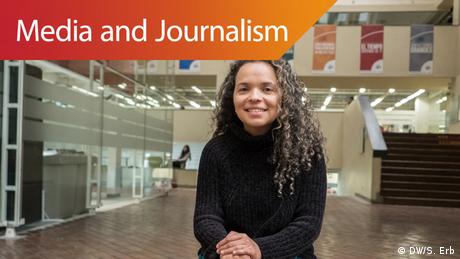 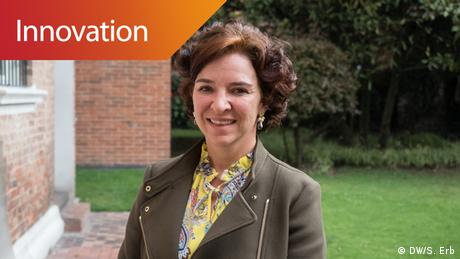 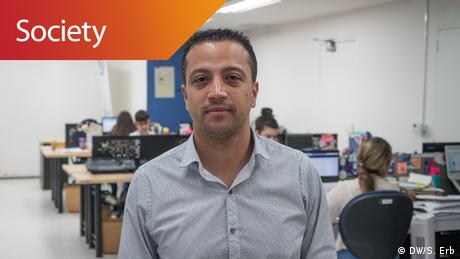