An army operation in Colombia has led to death of a rebel and the capture of three commanders of the leftist ELN group. The lesser-known guerillas have waged war against the state for more than 50 years. 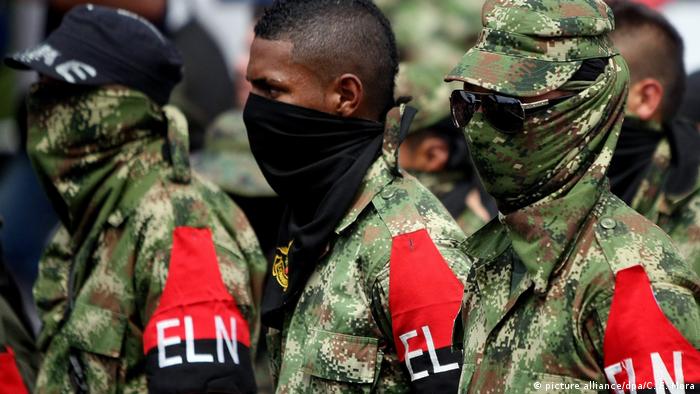 Colombia's military on Monday said it killed at least one rebel of the leftist National Liberation Army (ELN) and captured four others days before peace talks are scheduled to take place.

During the operation, the army detained the head of the group's finance committee and the leader of its public order division.

Can the Colombian peace deal be salvaged?

The ceasefire in Colombia is holding, despite a national referendum against the deal with FARC rebels. Will a consensus be reached on the controversial points in the peace agreement? (13.10.2016)

Colombian officials have announced a new push to reach peace with the country's second-largest rebel group ELN. Ex-president Uribe urged the government to be tougher on FARC while trying to salvage the failed peace bid. (11.10.2016)

The Nobel Peace Prize has been awarded to Colombian President Juan Manuel Santos for his role in the peace process with FARC rebels. He dedicated the prize to the victims of his country's civil war. (07.10.2016)

Opinion: There is still hope for peace in Colombia

The rejection of the FARC peace treaty does not mean there is no chance of peace. The country does not need international outrage to salvage the peace process; now more than ever, it needs help, says DW's Uta Thofern. (05.10.2016)

"At the location, soldiers discovered war materials, explosives, communications, logistics and devices with information of interest to state security agencies," the military said in a statement.

The operation was aimed at dismantling ELN's finances and policing mechanisms used to extort resources from farmers, ranchers and transporters in areas in which they operate, Colombia's army added.

The Defense Ministry said a separate operation led to the "demobilization" of 24 ELN rebels, according to a statement published on Twitter.

Peace talks between the leftist rebels and the Colombian government are expected to take place in the Ecuadoran capital, Quito, on October 27. However, the latest uptick in military operations against the ELN could deal a blow to the peace efforts.

Earlier this month, President Juan Manuel Santos won the Nobel Peace Prize for his efforts to end a half-century of conflict between government forces and the Revolutionary Armed Forces of Colombia (FARC).

However, voters narrowly rejected the deal with FARC, casting doubts on peace with the communist guerilla group.