German beer is known throughout the world for its high quality, and the image of a giant Bavarian beer mug is synonymous with German culture. However, a much smaller, lighter beer is now making its mark abroad too. 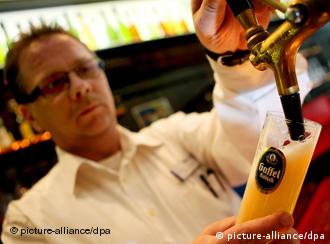 Kölsch is different in style and presentation to other beers

It's relatively easy to find German beer in pubs across the world. Major brands like Beck's have global distribution networks, while the traditional Bavarian brews being served at the Oktoberfest are easily found in major cities like London, New York or Beijing.

Recently, however, a much smaller, straw-colored beer from the western German city of Cologne has been making waves abroad. Exports of Cologne's local brew, Kölsch, have rocketed in the past year, with more and more foreign distributors wanting to get their hands on this light ale.

"The United States has been a strong market for us – we've had a 200 percent sales increase in the past three years," the CEO of the Gaffel Kölsch brewery, Heinrich Phillip Becker, told Deutsche Welle.

"Countries like Russia, China and Brazil are picking up the Kölsch culture too," he added. 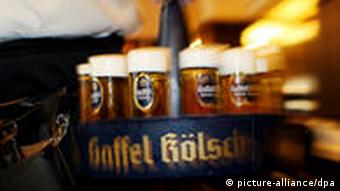 About 20 different brands of Kölsch are produced by 10 different breweries around Cologne. The three largest brands are made by private family breweries – Gaffel, Früh and Reissdorf.

Normally served in a thin glass - a "Stange" – that only holds 200 milliliters of beer, the image and culture of Kölsch is far removed from of the gigantean vessels favored by their Bavarian cousins. The idea behind the small glasses is that the beer stays fresh and cold.

"For the Bavarians these glasses would be too small!" joked Becker. "The good thing with the tiny glasses is the waiter - or "Köbes" – brings more and more beer and it stays fresh and enjoyable."

Certainly in the brew-houses of Cologne, visitors never have to wait long for a Köbes to bring them a fresh glass of beer. In fact, foreign tourists often enjoy one too many before a friendly local explains they should put a beer mat over the top of their glass if they don't want to be served another drink automatically.

As Kölsch exports rise, so too has the idea of the small glasses. "Wherever possible we supply the bars with the right glassware," said Ian Clay from James Clay beer importers in the UK. The company has been importing bottled Früh Kölsch since 2007 and has seen interest in the beer double over the past 12 months.

This new thirst for the beer can be seen in London, where city workers sip Kölsch at The Draft House pub near Tower Bridge. Here, Früh Kölsch has been on tap for the past month, and Gaffel Kölsch before that. 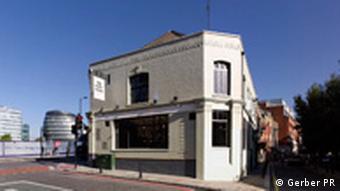 "We found it really suits the English style of drinking because it's not overly powerful in flavor," Voss said. "You can drink a fair amount of it without it going to the head really quickly."

Although the bar serves Stange-sized portions of the beer, Voss admits that many British consumers find it hard to drink beer from anything smaller than a pint, which is almost three times larger. Even the hefty price of more than six pounds (seven euros or more than $9) per pint hasn't changed that, the manager said.

According to European labeling rules, Kölsch can only be called Kölsch if it is brewed within the region of Cologne.

"You can pretty much compare it to champagne being produced in the Champagne region of France – it's the same with Kölsch actually," said Becker.

Kölsch's wave of popularity in the US has led microbreweries in New York, Boston, Charleston, Philadelphia and Portland to start producing a Kölsch-style drink – something the Cologne brewers are willing to tolerate as long as the newcomers don't grow too much. 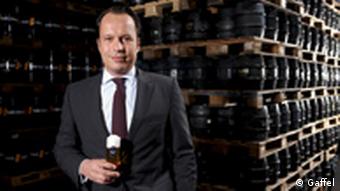 "They are producing Kölsch-style beer in small, small quantities – so it's not really a danger for us and our market. We see them more as ambassadors for the category Kölsch," Becker said, adding that any major brewer who tried the same thing would face a lawsuit in no time.

Gaffel Kölsch is now looking to consolidate its position in the market both at home and abroad. About 90 percent of its beer stays in Germany, and the company claims that every third Kölsch sold in the city of Cologne was made by its brewing team. Looking abroad, Gaffel is focusing most of its energy on the emerging markets of Russia, Africa and most importantly China.

"In China we're working with two good importers who are pushing German heritage, German quality brands into the Chinese market," said Gaffel CEO Becker. "We can see an exponential increase in our sales in China."

However, the CEO claims the brewery has no active strategy in marketing the beer abroad. It is reacting to demand rather than pushing its product.

"Importers from around the world are coming to us; we're not actively trying to sell our product," Becker said. "We're also very happy when somebody from a new country approaches us and is then doing well at developing a market."

Belgian-based drinks giant AB InBev, which owns some of Germany's best-loved beers, has recorded big sales in the Asia-Pacific region. This makes up for a steady decline in beer consumption in Europe and the US. (11.08.2011)