Some 50,000 protesters and 4,000 police officers were expected in Cologne for the populist-right AfD's party conference. In the city’s old town, residents expressed unease with the nationalists - and the heavy security. 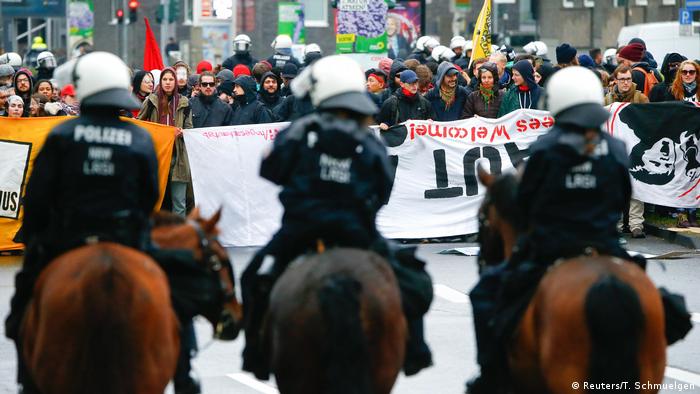 "No beer for Nazis!" reads a large banner at the Malzmühle brewery, a bar across from the Maritim hotel in the western German city of Cologne. It's a slogan that's been appearing across the city for weeks leading up to Saturday's Alternative for Germany (AfD) party convention. The Maritim is hosting the convention. 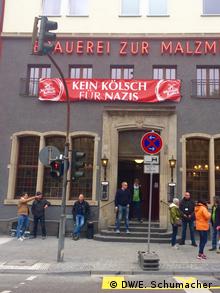 Nearby, more than 4,000 police officers were drafted in to keep the peace as some 50,000 protestors were expected to descend on the city center with the goal of blocking the convention entrance.

More than 70 different social justice groups and left-leaning organizations were set to launch massive protests across different points in the city, all joined under the rallying cry of "solidarity instead of agitation." For the demonstrators, the AfD's anti-immigrant rhetoric and euroskeptic nationalism are antithetical to progressive, multicultural Cologne.

"They discriminate based on race and religion. We think making a statement is crucial," a spokesman for one of the organizers, Nationalism is No Alternative, told Deutsche Welle.

Many people downtown felt uneasy, both with the presence of the right-wing party in their city and with the police officers busy setting up barricades and closing off parts of the city center in anticipation of any possible clashes tomorrow.

"I just want them gone from Cologne," one passerby says of the AfD, "they're making everything more difficult."

The police downplayed the somewhat ominous spectacle of enormous armored trucks rolling through the city streets. "It's all just precautionary," an officer told DW off the record. "We do expect some, shall we say, some radical members from the far-left to travel here," he said, but seemed confident that city and state police would have everything under control.

The Cologne convention is taking place at a crucial moment for the AfD. Amidst in-fighting in the top ranks and declining poll numbers, this weekend could quickly turn into a struggle for the soul of the party. 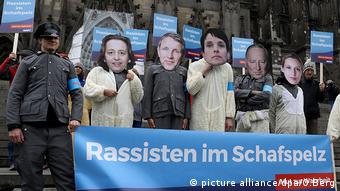 Co-chair Frauke Petry, who until now has been the populists' most recognizable face, has denied splitting the AfD into two camps by trying to move away from far-right ideology, perhaps in hopes of making the party more palatable to a broader slice of the German electorate.

Petry announced ahead of the convention that she would not run as its lead candidate as the AfD prepares to select its spearhead (or spearheads) for Germany's federal elections in September. For the people of Cologne, however, it didn't seem to matter who would emerge as leader when the summit comes to a close on Sunday - many will just be happy to see the back of them.