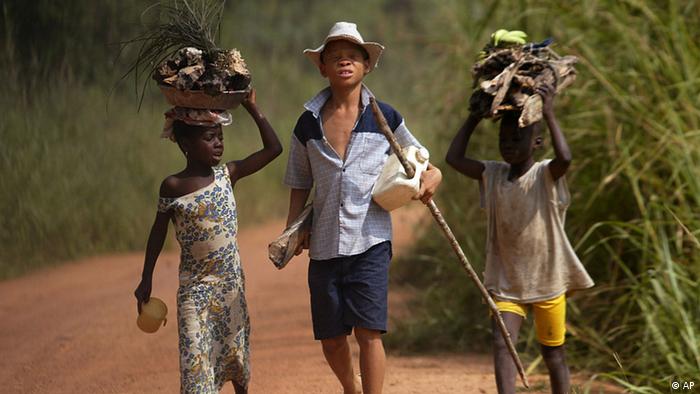 "The road to hell is paved with good intentions," according to a famous proverb. And there is indeed no lack of good intentions to eradicate child labor in cocoa farming.

But despite decades of promises, success is still a long way off, as a new study by the NORC research institute at the University of Chicago shows.

Around 1.6 million children in the two largest cocoa-growing countries, Ivory Coast and Ghana, work in cocoa farming, the study reports. Together the two nations produce around two-thirds of the world's cocoa beans.

On every second cocoa farm there, children as young as five have to pitch in instead of going to school because their parents are too poor to hire farm hands. Children are even used for more dangerous work, such as weeding or harvesting with machetes.

For some 20 years now, major chocolate manufactures like Mars and Nestle have promised to end the worst forms of child labor. They even set themselves clear goals and deadlines by signing the Harkin-Engel Protocol in 2001.

When the targets were missed, they were repeatedly postponed and adjusted. "In 2005, the deadline was extended to 2008, and then in 2008 to 2010," said Johannes Schorling from Inkota, a development policy network based in Berlin.

In 2010, a revised target was announced to reduce child labor by 70% come 2020. "That hasn't happened either, on the contrary child labor has actually increased over the last 10 years," Schorling told DW.

According to the NORC study, the use of child labor is now at 45%, an increase of 14 points. Given the goal of a 70% reduction, such an increase might well be termed a complete failure.

Industry representative Richard Scobey prefers to put it more mildly. "Child labor remains a persistent problem — and the targets we had set in 2010 were not fully realized," he told DW.

Scobey is president of the World Cocoa Foundation (WCF), an organization of about 100 leading companies in the industry, including cocoa processors such as Barry Callebaut (Switzerland), Olam International (Singapore) and Cargill (US). It also includes chocolate manufacturers like Nestle (Switzerland), Mars and Hershey (both USA) and retailers such as Starbucks.

"The NORC study acknowledges that the target was not realistic," said Scobey. When the goal was set back in 2010, it "was not set with an understanding of the complexity and scale of the challenge, which is heavily driven by poverty, traditional norms and customs, weaknesses in the labor markets, and poor social and economic infrastructure."

Scobey also points out that while cocoa production has grown by 60% within the last decade, child labor has increased at a lower rate.

But nowadays, much more is known about how to stop child labor, says Scobey, thanks to academic studies such as the one done by NORC (paid for by the US Department of Labor). The industry is already funding numerous programs to address the problem, he adds.

This is true, says Schoring from the NGO network Inkota. "But given that the promise to solve this problem was made 19 years ago, far too little is being done."

A big problem for farmers is the low price cocoa fetches on world markets. In recent years, a ton of cocoa beans brought in just over $2,000 (€1,680), only half of the price it fetched in the 1970s.

The farmers must therefore be more productive, says the WCF president. "The biggest investment of the industry in the past 10 years has been around boosting farmers' yields and profitability," said Scobey, adding that sustainable farming methods were rewarded with bonus payments.

But all this did little to increase incomes and lower the prevalence of child labor, said Inkota's Schorling. "That's why we have to talk about fair prices."

What is a fair price?

And this is where it gets complicated. Market forces alone seem unable to ensure that farmers can actually secure a livelihood. It takes years for cocoa trees to produce good yields, so farmers cannot just grow something else when prices fall.

Farmers are also the weakest link in the global value chain. They receive only a tiny fraction of what customers pay for a bar of chocolate. Most of the money goes to the chocolate companies and retail chains, which are mostly based in the US and Europe, and increasingly in Asia. 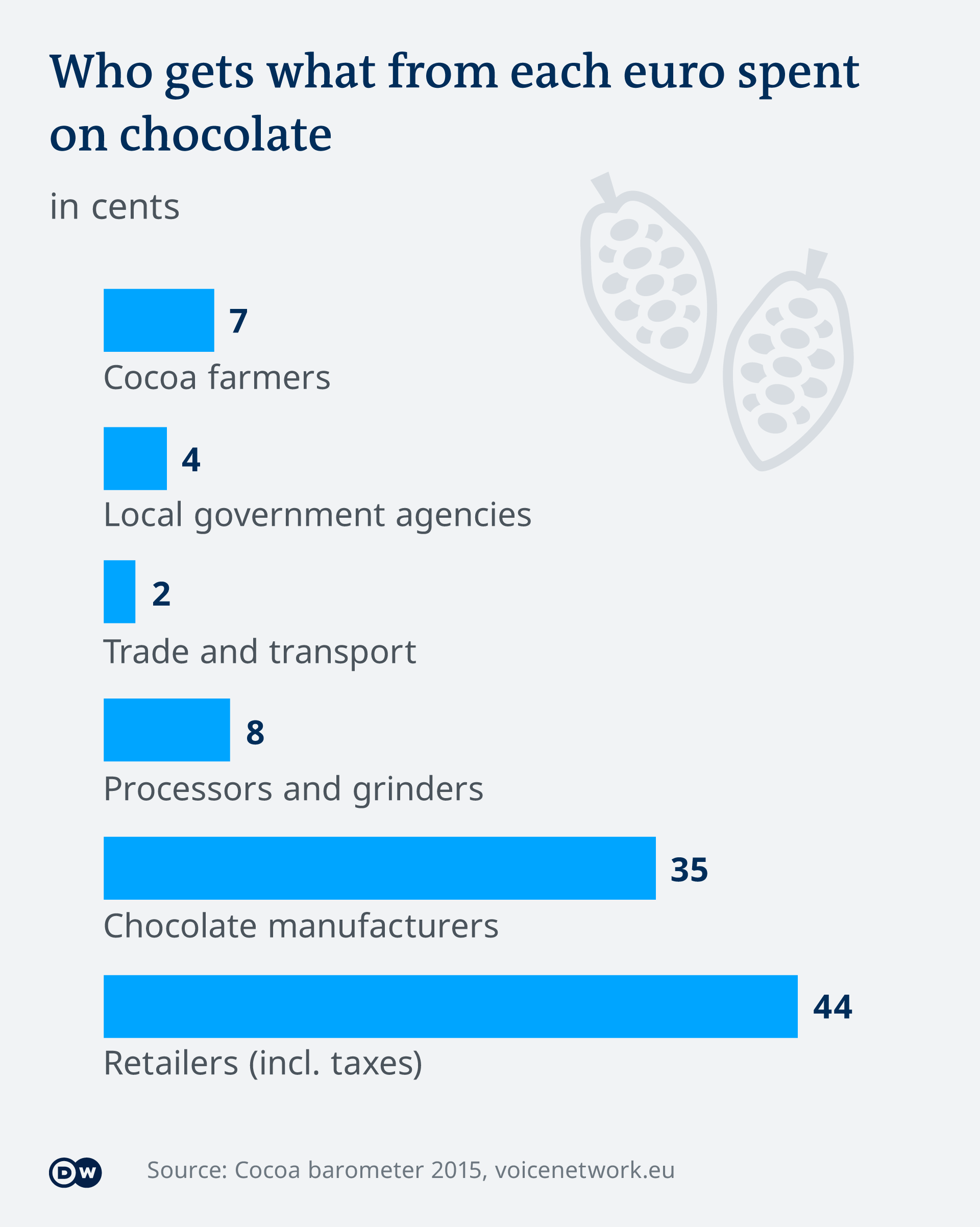 Last year, Ghana and Ivory Coast forged what was called "the Opec for cocoa." Since this October, buyers of their cocoa beans have to pay a premium of about $400 per ton.

The industry, which had previously opposed higher prices, now supports this living income differential. "This will generate an estimated $1.2 billion in additional revenue for cocoa farmers," said Scobey.

"These two governments have done more for fairer prices than the industry has done in years," said Schorling.

But how exactly the markup will affect farmers' incomes has yet to be investigated. Before its introduction, cocoa farmers in Ivory Coast earned only $0.78 a day on average, according to a study by Fairtrade, an NGO, compared with a living wage of $2.51.

Does a supply chain law help?

After repeatedly failing to meet its own goals to end child labor, the cocoa industry is no longer setting concrete reduction targets. But it continues to focus on increasing yields.

Over the next five years, large companies plan to train all farmers in their supply chains to become more productive. The industry also wants to expand programs in which cocoa farmers themselves monitor child labor in their villages and provide education. By 2025, these programs are to cover 100% of the supply chains in Ghana and Ivory Coast, compared to only 20% today.

Further studies will then have to show whether these goals were achieved — and, more importantly, whether they actually help reduce child labor.

Inkota and other NGOs doubt that voluntary commitments by industry will suffice. They are also lobbying for a supply chain law that would make companies liable for what happens in their supply chains.

In Germany, no such law has yet been passed. But years of debate have created a long list of declarations of good intentions. You could almost pave a road with it.