Coalition Government in Doubt as SPD Undergoes Shakeup | Germany | News and in-depth reporting from Berlin and beyond | DW | 01.11.2005

The surprise announcement of the resignation of SPD chief Franz Müntefering has thrown the future of a left-right coalition government into doubt. But what an alternative would be is unclear. 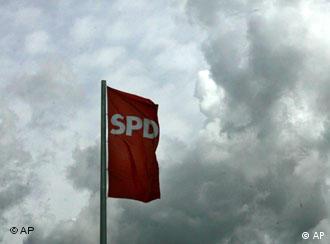 Müntefering's decision to step down from the leadership post at the Social Democrats (SPD) combined with the news that Edmund Stoiber, head of the Bavarian Christian Social Union, had abandoned plans to join a future cabinet has politicians on both sides questioning whether a "grand coalition" between the conservatives and the Social Democrats is now possible.

"The whole project of cooperating to form a government is under examination," Gernot Erler, the deputy head of the SPD in parliament, said in a television interview.

Questions about the feasibility of a coalition government between the center left and center right are also coming from the conservatives, especially after the sense of crisis was ratcheted up a notch after Stoiber, a powerful German politician and key player in the coalition formation talks, said on Tuesday evening he would not take up a post in the future Angela Merkel-led cabinet.

"Franz Müntefering is an authority and pillar of the grand coalition," he said. "This has changed with developments in the SPD. The course of the SPD is no longer so clear."

He went on to say he thought he could better represent the interests of his CSU party from Munich. He suggested that Michael Glos, the CSU's parliamentary leader, replace him.

This double defection unnerved politicians on the conservative side as well.

"We want to bring these (coalition) negotiations to a successful conclusion, but one can't rule out (the possibility) that they will fail," said Wolfgang Bosbach, the deputy conservative leader in parliament and close ally of Merkel, in a radio interview.

"I am fully committed to making a grand coalition possible. We will work to make a success of it," she said on national television. "We will work towards this goal with optimism, with effort and with some joy at the prospect of giving the electorate that for which it voted."

Müntefering was slated to become labor minister and vice-chancellor in the coalition government, and earlier Tuesday it was unclear whether he would take up those posts in a future cabinet after his resignation from the top SPD position. 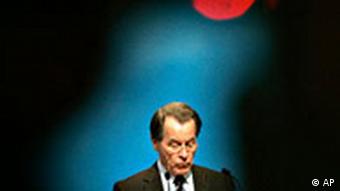 Müntefering's sudden announcement has thrown his party into an uproar

While several politicians expressed doubts about the future government constellation, some political analysts also think a Müntefering exit could prove fatal for a left-right partnership.

"There will be grave consequences for the coalition if Müntefering really does opt out of the cabinet," said Luthar Probst from the Political Institute in Bremen.

But later on Tuesday in a memo addressed to SPD members that will likely soothe some fears of a grand coalition collapse, Müntefering indicated he would be willing to still serve as labor minister and vice-chancellor in a Merkel cabinet.

"The SPD leadership will get younger just a little earlier than I thought it would," the memo said, adding that he wanted to work on a friendly basis from inside the government with the future leadership of the Social Democrats.

Müntefering had announced his resignation from the party leadership post on Monday after his hand-picked candidate for the position of SPD secretary general, Kajo Wasserhövel, lost soundly in an executive committee vote to Andrea Nahles, who represents the left-wing of the party. 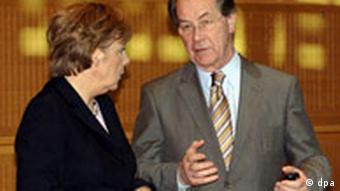 Gero Neugebauer, a professor of political sociology at Berlin's Free University, does not believe the current uproar over the SPD leadership and Stoiber's return to Munich necessarily means the end of the grand coalition, despite the shaken confidence of the parties involved.

"Both parties have a long-term interest in making it work for now," he said. "Both need to build a stable government and look toward to the 2009 elections."

But he added: "The chances of that coalition being stable are now not as good."

The strains within the SPD were evident on Tuesday with calls going out for a wholesale shake-up of the party leadership while others are calling for all personnel questions to be put off for two weeks, until an SPD party congress is scheduled takes place.

An Internet site called "We Want Franz" has been set up to support keeping Müntefering on board. He is considered by many to be a level-headed broker, whose has demonstrated talent in holding his often fractious party together and negotiating successfully with conservatives. 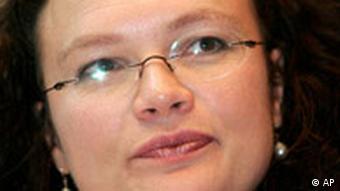 Some see the rejection of Müntefering's candidate for secretary general by the executive committee in favor of the 35-year-old Nahles a sign of a leftward shift in the party and an early indication that a battle is brewing between the SPD's more centrist wing, represented by Müntefering, and the left-wing group, whose members tend to be younger. Nahles herself was once head of the Jusos, the party's youth wing.

But Neugebauer said he thinks there is more of a generational conflict in play, and a rebellion against an authoritarian leadership style Münterfering represented, in which decisions were often made by a few from on high.

"The struggle is between the technocrats of the party, such as Wasserhövel represented, and those who want their leaders to listen to what party members and voters have to say," he said.

German Chancellor-designate Angela Merkel has said that she will continue to try to form a coalition government despite a decision by her negotiating counterpart Franz Müntefering to quit as SPD leader. (Nov. 1, 2005)

The German press reacted with bafflement to Franz Müntefering's decision to step down as SPD leader, since the untimely power struggle within SPD could only destabilize the future government. If one is formed, that is. (Nov. 1, 2005)