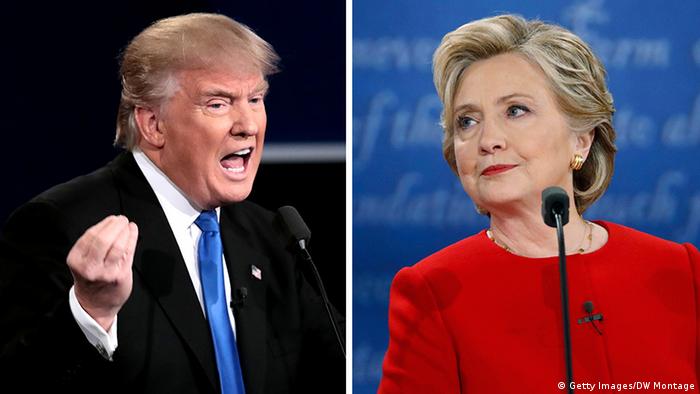 US presidential hopefuls Donald Trump and Hillary Clinton squared off on Monday night in their first televised debate. After two hours of sparring over the economy, terrorism, and crime, multiple polls suggested that the public saw Clinton as the clear winner of the evening.

The debate, moderated by NBC Nightly News anchor Lester Holt, began civilly enough. When asked about their plans for America's economic future, Republican candidate Trump focused on the threat of immigration: "We have to stop our jobs being stolen from us."

Democrat Clinton, on the other hand, offered more concrete solutions by suggesting investing in "Innovation, new technology. Have to make the economy fairer, starting with raising minimum wage and equal pay." She added that "closing tax loopholes and making the rich pay their fair share of taxes" could help finance policies to ease the financial burden of American workers, such as eased sick pay and paid family leave.

Trump retorted that Clinton was targeting the wealthy, who he believed to be job-creators.

"You've been doing this for 30 years, why are you just thinking about solutions now?" the Republican candidate asked his rival, to which she responded that her record made it clear she had been working on the issue for some time.

She also criticized Trump for believe in trickle down economics, which she pointed out has not been proven to viably lift up the lower and middle classes, as its proponents promise. She slammed what she called "Trumped up" financial policies. The pair also clashed over trade policies, with Trump calling NAFTA one of the worst trade deals in history, while Clinton reminded him that she condemned it after it was finalized.

The tone soon turned personal, however, when Lester Holt asked about Trump's failure to release his tax returns, he turned the tables and said he would do so if Clinton released her 33,000 deleted e-mails.

He then said he was "smart," when Clinton claimed he was likely avoiding letting the public know he didn't pay his fair share of taxes. Trump said the money would be "squandered" if he had.

As the debate turned to crime and the recent spate of unrest in the US, Trump said he supported programs like the controversial stop-and-frisk program, which saw police officers in cities like New York able to stop random pedestrians and check them for weapons.

When host Holt pointed out that the practice had been declared unconstitutional for, among other things, promoting racial profiling, Trump said it was a good policy that had only been struck down because of the "anti-police" judge who made the ruling.

The candidates also discussed the threat of terrorism, personified by the nebulous "Islamic State" (IS) organization in Syria and Iraq. Trump mocked Clinton for outlining her plan to defeat IS on her website, saying he was giving away her strategy to the enemy.

"At least I have a plan," Clinton retorted.

Trump: Clinton doesn't have 'stamina' to be president

Towards the end of the debate, Trump referenced the Democrat's recent bout of pneumonia, claiming she lacked the "stamina" to be president.

"You have so many different things you have to be able to do and I don't believe Hillary has the stamina," Trump said.

Listing off her experience as First Lady, as US Senator, and as Secretary of State, Clinton replied that as soon as he travels to 112 countries and negotiates a peace deal, a cease-fire, a release of dissidents, an opening of new opportunities and nations around the world — or even spends 11 hours testifying in front of a congressional committee — he can talk to me about stamina."

The Republican admitted that Clinton had "experience...but bad experience."

She also called out Trump's often abrasive attitude towards women, publicly calling certain individuals "pigs, slobs and dogs," and slammed his having been a leader of the "birther" movement, which questioned whether President Barack Obama was born in the United States.

Also on the subject of Trump's treatment of women, Clinton highlighted how he once called Miss Universe 1996, Alicia Machado, "Miss Piggy" for gaining weight and "Miss Housekeeping" for her Latina origins. The Venezuelan-born actress and beauty queen is now a US citizen.

"She has a name Donald. It's Alicia Machado...and you can bet she is going to vote this November," came Clinton's jab.

After two hours of back-and-forth, a poll of debate viewers conducted by CNN/ORC found that 62% agreed that Clinton won the debate, praising her preparedness. A second survey conducted by Public Policy Polling said Clinton was the victor by a margin of 51 to 40. This poll also found that Clinton scored major leads with young and minority voters.

On October 4, vice presidential candidates Mike Pence and Tim Kaine will face each other in a similar format. The next debate between Clinton and Trump, which will be held in a town hall format, is set for October 9.