Clinton or Obama? Germany Gripped by US Primaries Drama | Germany | News and in-depth reporting from Berlin and beyond | DW | 05.03.2008

Clinton or Obama? Germany Gripped by US Primaries Drama

Barack Obama's popularity has soared in Germany in recent weeks with many comparing him to President John F. Kennedy. But experts say Clinton, who has revived her campaign, is well-liked across the Atlantic too. 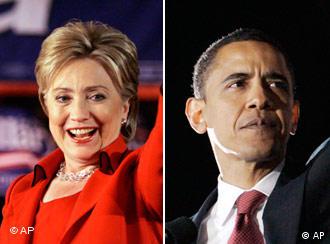 Clinton is a well-known name in Germany, Obama has wowed many with his charisma

Barack Obama has been a fixture in the German media for a while now, hogging the headlines and gracing the covers of major publications. 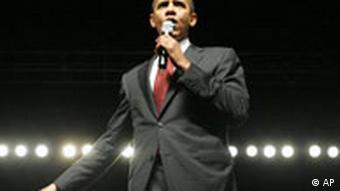 Leading German newsmagazine Der Spiegel even went so far as to address his popularity in Biblical terms, featuring him on their Feb. 11 cover with the title "The Messiah Factor: Barack Obama and the Yearning for a New America."

A recent poll by the London-based Financial Times found that Obama is the people's number one choice in Germany, Italy, France and Spain.

Clinton not written off yet

Despite the intense coverage of Obama in the German press, which has frequently compared him to President John F. Kennedy, -- most remembered in Germany for the support he gave Berlin when the Wall was built during his presidency in 1961 -- experts point out that Obama's challenger, Hillary Clinton, remains well-liked and respected by many Germans too.

"Until mid-January, there was more sympathy for Hillary Clinton," Christoph von Marschall, Washington correspondent for the Berlin-based Tagesspiegel newspaper and author of the book "Der schwarze Kennedy (The Black Kennedy), a biography about Obama, told DW-WORLD.DE.

"Far more people knew Clinton, and 'Clinton' is a good name in Germany and Europe; it's not linked to all the scandals like it is in the US," he said.

"It's connected with a peaceful and successful time in international politics and also a time of relative harmony in trans-Atlantic relations," he added. 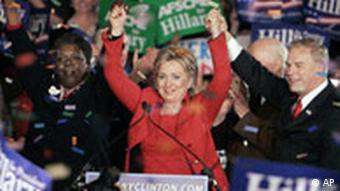 Clinton has climbed up the popularity stakes, energizing her campaign after winning key primaries in Texas, Ohio and Rhode Island.

Media around the world have hailed Clinton's Tuesday victories as a "comeback," but the race with Barack Obama for the Democratic nomination remains neck-and-neck after his long stretch of winning primaries in 11 other states. While the decision about the nomination could ultimately be left to the superdelegates, right now, Obama remains ahead in terms of popular votes.

Message of change resonates with Germans

In Germany, Obama's popularity has much to do with the fact that the young senator from Illinois represents a change from the present government and policies in America, some say.

"Many Germans, like Americans, want to see change in America, and Barack Obama stands for that," Alexander Höse, a lecturer of German-American relations at the University of Cologne, told DW-RADIO.

"By way of his own will and determination, he has worked his way up through the ranks and has still remained human along the way," Klingst wrote in a review of von Marschall's book. 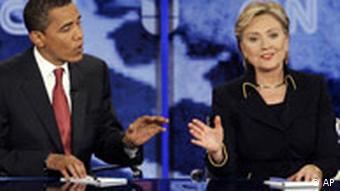 Clinton (r) has complained that American journalists are tough on her

"He thinks beyond party boundaries and he seems to revive the vision of a modern, post-racist society in which anyone can become president, regardless of their origins, their skin color or their gender," he continued.

With a father as a Kenyan exchange student and a white mother originally from Kansas, Obama's is also a classic rags-to-riches story: a young, African-American man from a lower middle-class family who becomes a respected lawyer and Senator.

"After all the years of America-bashing and Bush-bashing around the world, Americans have the opportunity to like themselves more because the dream of the country seems to work again," von Marschall said.

And the "charisma factor" cannot be underestimated among Germans either.

"Since she entered public life in the US, Hillary Clinton has always had a problem appearing as friendly and nice to the media," von Marschall said. "She has difficulties opening up, while Obama seems open-hearted."

Sitting on the fence

Yet Thomas Lückerath, editor-in-chief of DWDL.de, an Internet news magazine that covers the German media industry, agreed with von Marschall that Clinton's appeal could not be underestimated in Germany either. 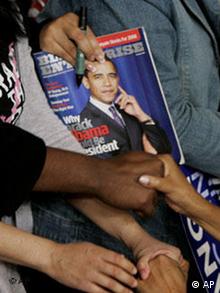 Will the nomination be about race (or gender)?

"I don't think the German media have already made a decision for Obama, especially if you look at the question of whether a woman or a black man should become president," he said. "If you look at Chancellor Merkel, you see that the issue of a woman running the country is also on people's minds."

He pointed out that "both have strong personalities and both have interesting personal backgrounds."

Generally, electing an American president about is not about differences in policy, von Marschall said.

"It's about whether a person appeals to citizens, whether the public thinks 'that's a nice guy or woman' I can have in my living room on the news every day for the next four years."

Still, the journalist has words of caution when it comes to Obama.

"He is creating so many expectations that he will not be able to meet them -- it would be more than what is humanly possible."

Listen to a longer interview with Christoph von Marschall by clicking on the audio box below.

Europeans think the next US president will be better. They hope a Democrat in the White House will reinvigorate trans-Atlantic ties. But the candidates aren't necessarily much more in tune with Europe. (24.02.2008)

The majority of Democrats living outside the United States have chosen Barack Obama as their preferred presidential candidate ahead of rival Hillary Clinton. (22.02.2008)

What has the media coverage on the US primaries been like in your country? Please include your name and country in your reply.