′Climate Sail′ educates on impacts to oceans | Environment | All topics from climate change to conservation | DW | 16.10.2015

In the lead-up to the UN climate summit in December, a boat traveling from Hamburg to Paris is educating people about the devastating effects of climate change on oceans. DW hops onboard for a stretch. 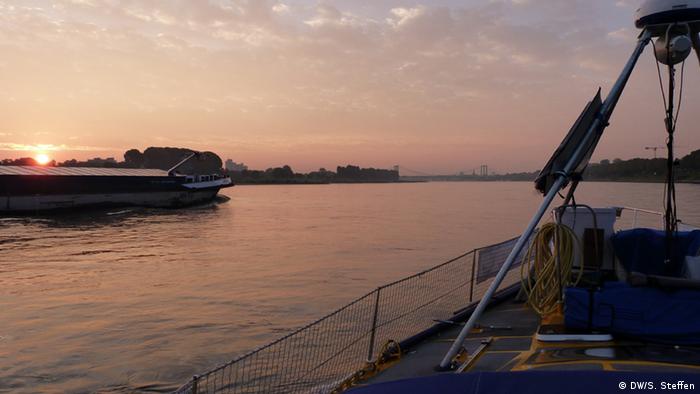 It's cold and really early in the morning when research vessel Aldebaran prepares to cast off from the harbor in Cologne in western Germany. It's picturesque as the boat slowly glides through the waters, fog resting on the river, accompanied by a dusky sunrise.

The small team of the German Ocean Foundation left Hamburg a few days ago, and will stop in multiple cities along the way before it's due to arrive in Paris for the UN climate summit, the COP21, in December.

This "Climate Sail" is not so much a sailing endeavor as it is a motor-powered journey, because the team is going upstream. They also had to get rid of the mast - a tall spar sticking up from the boat - to be able to go past bridges. 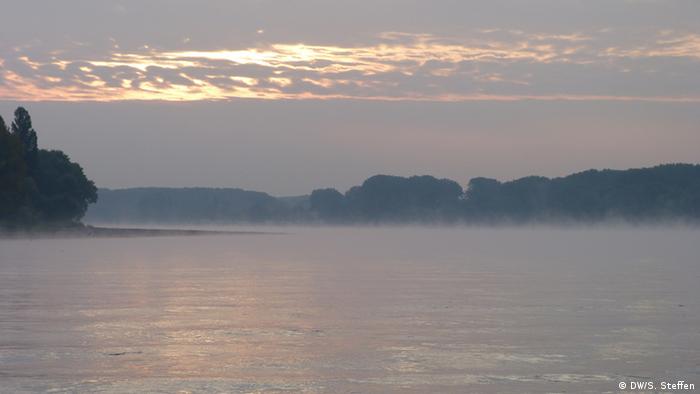 With the temperature at just about freezing, it takes some dedication to ply Europe's rivers for two months. But the team is on a mission: to rally people to take action against climate change.

"The slogan of the trip is renew, because to use renewable energies as soon as possible is the most effective way to save the oceans - 93 percent of all the pollution is going to the ocean," said Frank Schweikert, a biologist and one of the founders of the German Ocean Foundation. He also owns the Aldebaran research vessel.

"We already have a warming of around 1 degree [Celsius]. And if there's a warming of another 1.5 degrees, all the warm water coral reefs will die," he added. 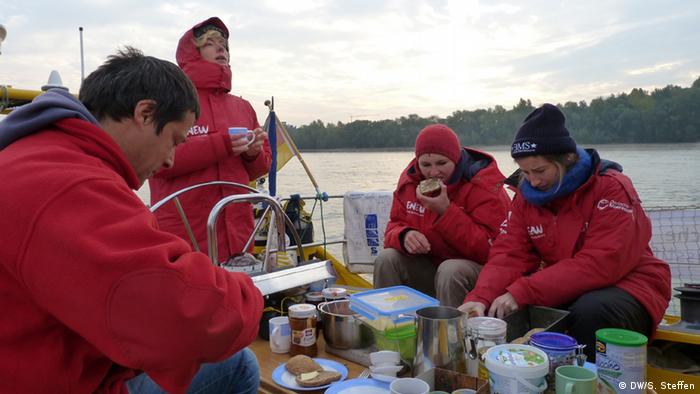 It's a small team here onboard: Schweikert and his colleague, marine researcher Svenja Angenendt, along with a few volunteers. The team is trying to educate people about the effects of climate change on the oceans.

And while they are cruising Europe's rivers, they're also taking samples for a research project on plastic pollution.

"The plastic problem is one of the biggest ones - not just in rivers, but also oceans," Schweikert said.

"Plastic waste in rivers and the sediment is acting like a magnet to toxins," Schweikert explained. "It's not just the plastic pollution which is dangerous, but also the toxins around [the plastic] - because a lot of fish will eat this, and it will land on our own plates."

And what's worse than the visible plastic floating atop the ocean is the invisible microplastic, he added. "This is one of the most unknown things about oceans." 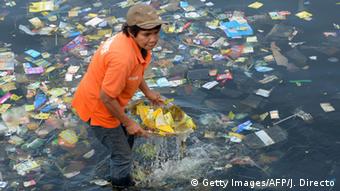 Plastic waste in oceans is dangerous - but what's worse is the invisible microplastic, says Schweikert

These include damaging plastic particles or "micro-beads" from products like body scrubs or toothpaste, he adds. And the solution, he says, is simple: If it contains that kind of stuff, just don't buy it.

Part of their mission is to inform consumers on more environmentally friendly choices: like banking with companies that invest in sustainable projects, and switching to renewable energy like solar power.

"There are lots of options in everyday life to change the world actually," said Svenja Angenendt, who organized the Climate Sail for the German Ocean Foundation. "As a consumer you have a lot of power. Do you buy vegetables from your own country, or have they been shipped from South America?"

Everyday, the bright yellow boat docks at a different city. The German Ocean Foundation then meets with people - like at appointments with politicians and locals - or even spontaneous get-togethers with curious passers-by.

And after some five hours to travel 35 kilometers, we've arrived at our destination for the day: Bonn.

Here, the Climate Sail team meets up with outgoing mayor Jürgen Nimptsch, and Nick Nuttall of the United Nations Framework Convention on Climate Change - among others. Schweikert shows them around the boat.

While the mayor of Bonn - who's also the Vice Chair of the World Mayors Council on Climate Change - points to the city's climate actions such as a bridge that generates solar power, and plans to have all public buses go electric by 2030, everyone aboard the ship agrees: education on climate change is key. "That's why we are doing this project," Schweikert said. 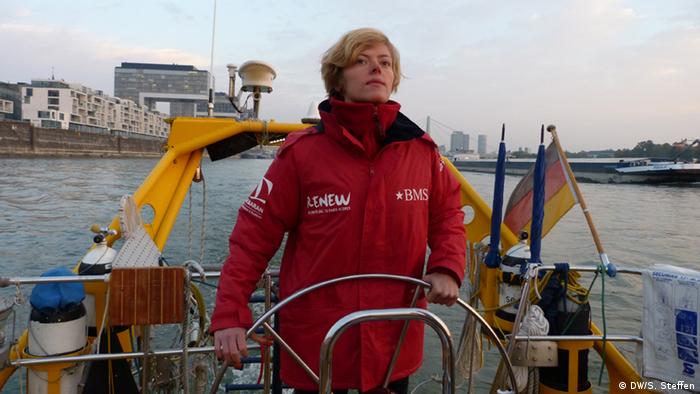 "We live in a world where we live in a kind of bubble of the United Nations and you think everybody understands what is actually happening to our planet," the UN's Nuttall said candidly. "But again and again and again, we have to educate people about what is happening and trying to relate it to their own lives," Nuttall added.

Even the volunteers on board say they've learned a lot about climate issues just by being here. Like 25-year-old Lisa, for instance, who will be on the boat for two weeks and help steer the vessel as experienced skipper.

Or 25-year old Antje, who's on a break from university and decided to come along. "Now that I'm on the boat, I learn more about [climate change]. I wish I could stay until Paris, but I don't have the time."

Educating people about the issues of climate change is what the Climate Sail team hopes it will achieve on many more stops during its two-month trip.

And by the time it docks in Paris, the project will have gathered a lot of samples of plastic pollution in Europe's rivers.

Draft climate text released - but what about the emission gap?

Implementation of the 146 national climate action plans submitted in preparation of the Paris climate summit would result in global warming of 2.7 degrees Celsius - which is still above the target of 2 degrees Celsius. (05.10.2015)

As part of a new climate action plan, Paris went car-free this past Sunday. To reduce its carbon footprint, the French capital intends to build out bicycling and renewable energy. Can it become a model green city? (28.09.2015)

Coral reefs are among the world's richest ecosystems - and they will disappear from the face of the Earth before this century is over if we don't make serious changes, ecologist Peter Sale told DW. (18.08.2015)