A decade ago, Germany was a pioneer in fighting climate change via the expansion of renewable energies. But now, like many G20 nations, its climate protection is stagnating as global emissions rise again. 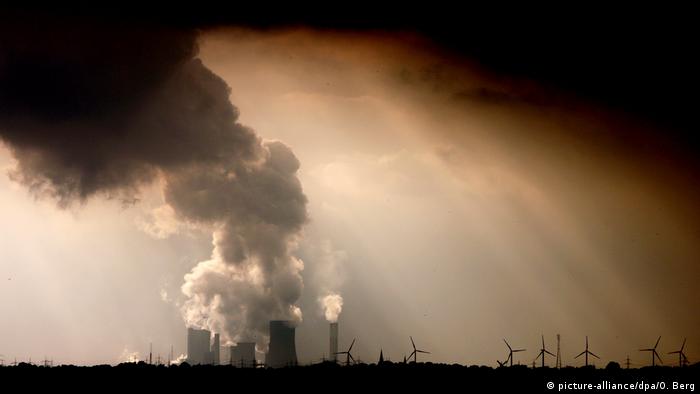 As greenhouse gas emissions increase, the Climate Change Performance Index 2019 shows that only a handful of nations have implemented strategies to limit global warming to well below 2 degrees Celsius (3.6 degrees Fahrenheit).

The annual report — published Monday at the COP24 climate summit in Katowice, Poland — tracks climate change performance in 56 countries and the EU. It comes on the heels of news that after CO2 emissions stabilized for three consecutive years, they are set to hit historic highs in 2018.

Germany, so often held up as a beacon in the climate change fight, comes in at a middling 27th position — five places below its spot last year.

"Our climate change index shows that there is no lack of commitment to the Paris climate agreement — but there is still a lack of political will to implement concrete steps," said Jan Burck from Germanwatch, an environmental organization that co-authored the report with the NewClimate Institute and Climate Action Network.

"There are no excuses for this, as all solutions are on the table and are also affordable," Burck added.

While the IPCC and the United Nations Environment Program have warned that carbon emissions must fall rapidly if warming is to be kept below 2 degrees, year-on-year global CO2 emissions increased 1.6 percent in 2017. 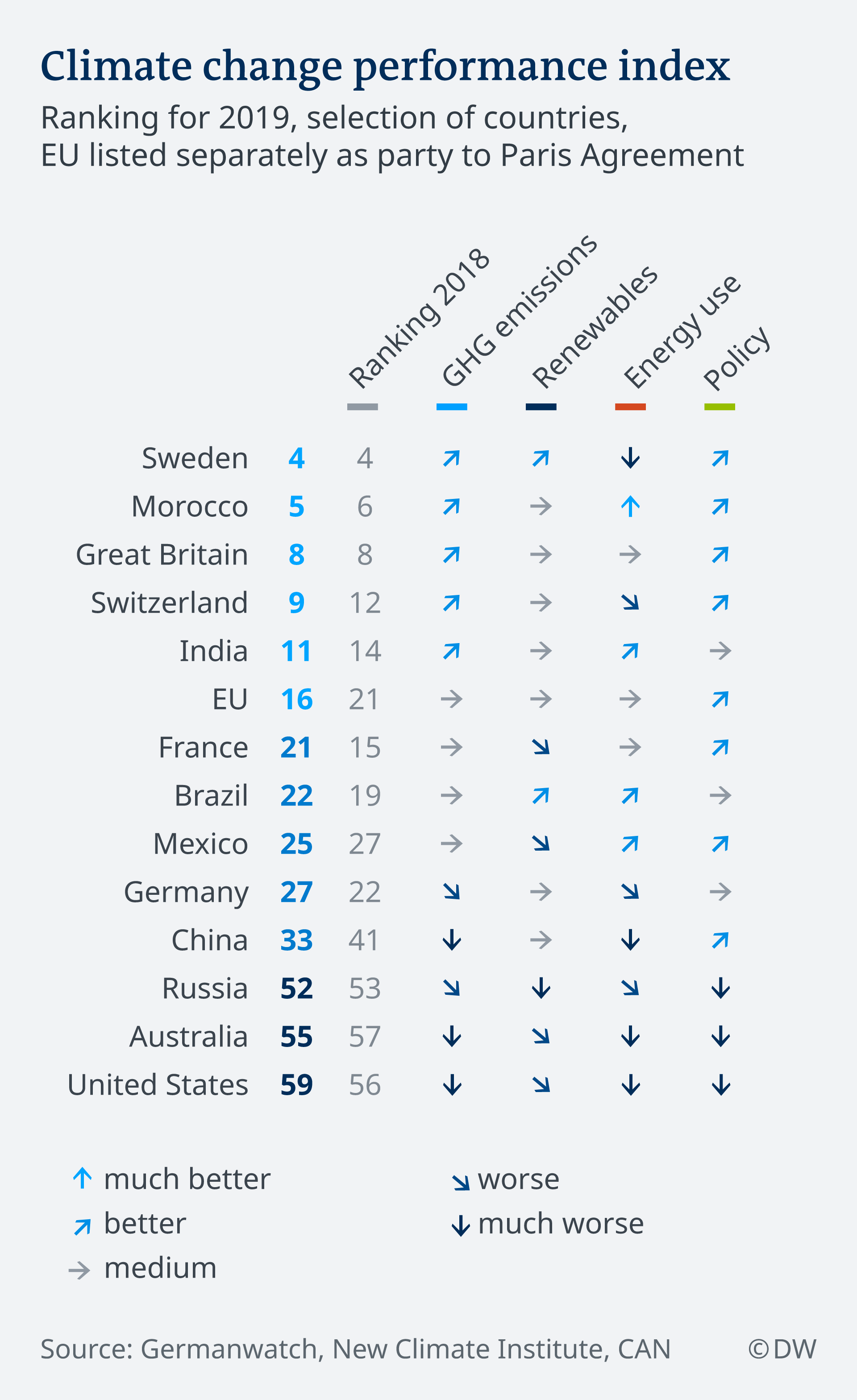 The first three places in the ranking were again kept free by the authors since no country has done enough to keep temperature rises well below 2 degrees.

Read more: Who fights hardest for the climate?

The top ranked nation was again Sweden in 4th place, which performed well in terms of renewable energies and greenhouse gas emissions. Morocco came in 5th due to its rapid expansion of renewables and an ambitious carbon reduction target — the North African nation is on track to generate 42 percent of its electricity needs through renewables by 2020.

Also making the "good" category were India (11) and the European Union as a whole (16). India ranked relatively well due to its dynamic expansion of renewables, relatively low per capita emissions and an ambitious 2030 climate target — though plans for new coal-fired power plants counted against the Asian powerhouse.

The EU's moderate performance in terms of emissions and energy efficiency was somewhat compensated by high marks for climate policy — especially measures to achieve the 2030 climate target, as well as the European Commission's efforts to push for net-zero carbon emissions by 2050. 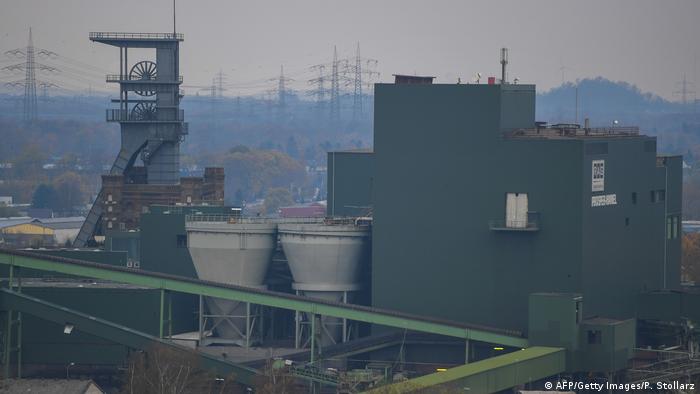 While Germany is closing coal mines like this one near Bottrop, a lack of commitment to a full coal phaseout means the country is no longer a climate protection pioneer

China (33) made it into the "moderate" category for the first time after emissions leveled off between 2014 and 2016 — though emissions have since risen again.

Yet again, Australia ranked among the very low-performing countries in three of the CCPI's categories — GHG emissions, energy use and climate policy — and in terms of renewable energy, with experts emphasizing the need to reduce its 2030 emission reduction targets. It placed just ahead of the USA, which has been in free fall since the climate-denying Trump administration took office nearly two years ago.

The US performed poorly to very badly on emissions, renewables and energy efficiency, and hardly surprisingly in terms of climate policy after President Trump pulled out of the Paris climate agreement.

In view of the regression in climate policy on the part of the United States, the EU must grow into a leadership role, said Stephan Singer of the Climate Action Network, a co-publisher of the CCPI report.

"It is very important now that the EU needs to enhance its current climate commitment to show leadership," Singer said at the presentation of the report in Katowice. He added that EU member countries, most especially Germany, must maintain their climate targets.

While the scores awarded by the climate policy experts were lower in 2018 than all previous years, renewable energies continue to expand.

"Before Paris, the world was heading to 4-5 degrees of global warming. Now we are still on a path to more than 3 degrees — still a catastrophic perspective," said Niklas Höhne, a report co-author from the NewClimate Institute

"But the costs of electricity from wind and solar have dropped by roughly a third since then, so all countries can increase ambition and pace," he added.

Germany needs to step up

For Hans-Josef Fell, president and founder of Energy Watch Group (which did not take part in the analysis), the rankings prove "the merciless failure of the global community for truly effective climate protection."

Fell said Germany's own medium ranking is due to past and not current policies. "Germany is still benefiting from the strong expansion of the last decade, but is currently moving toward the final stages in expansion of renewable energy," Fell told DW. 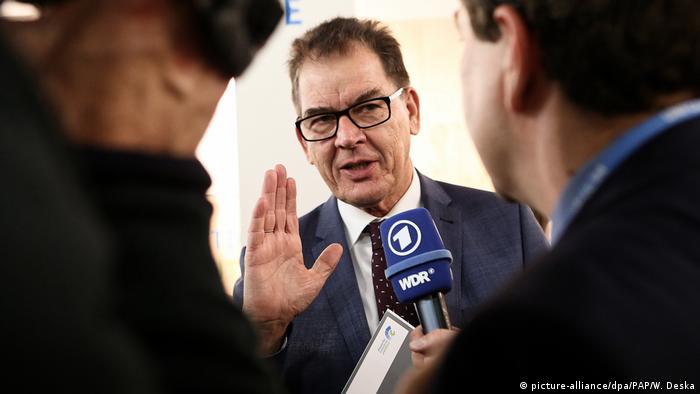 Gerd Müller, Germany's minister for economic cooperation, talks at the opening of the German pavilion in Katowice. Critics say the German government have lacked leadership on climate change

Burck said there must be a renewed political commitment to climate protection in Germany. He says the federal government has put the brakes on climate policies including the so-called e-mobility transformation and the phaseout of coal, meaning it arrived at Katowice "empty-handed."

With time running out, Germany must now take a more radical approach to climate protection, through new instruments such as a carbon price across all sectors, he believes.

Without this instrument in particular, Burck warns that Germany's "cost-efficient transformation will not succeed in time."