Belgian citizens have been raising awareness for a greener planet at a "United for Climate" demonstration. Demonstrators encircled both the federal parliament and the Royal Palace. 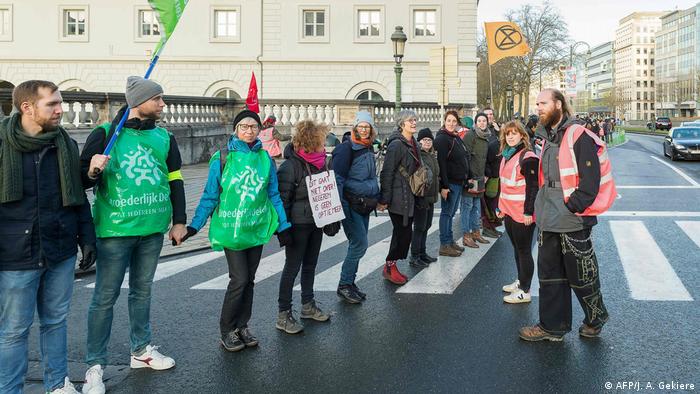 Some 2,400 people in Brussels held hands on Sunday to form a human chain as part of demands for tougher measures to combat climate change.

The peaceful demonstration came during the UN's climate conference in Madrid, where policymakers are gathering to resolve outstanding issues in relation to the environmental emergency.

Protesters managed to surround the Belgian federal parliament and the Royal Palace as part of their two-hour protest.

"The main purpose is to ask for more climate ambition and for the federal government to tackle the climate crisis," said Julie Van Houtryve, spokeswoman for one of the organizers, Climate Coalition in Belgium. "We need solidarity and cooperation between governments and politicians in Belgium."

Climate activist, Marleen de Vry told news agency Reuters: "I'm with the 'grandparents for the climate' and for about one year now we've been supporting the youngsters who were demonstrating on the streets for the climate. Many people laughed at them and well, many people did not take them serious, but we did. So we came here to support them from the very beginning, we're still here."

People held placards and banners as they formed the chain, known as "United for Climate," in the Belgian capital with slogans such as "The only right system is an ecosystem" and "Act Now," as seen in footage by broadcaster VRT.