In Schumann's Romances, the oboe and piano flirt like two lovers: Intimate, full of desire and with mischievous undertones. "Each romance is a love song to Clara," explained the young oboist Philippe Tondre. 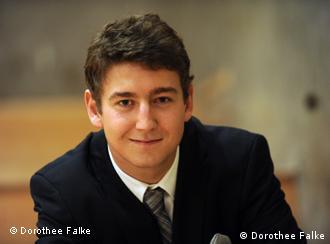 When Philippe Tondre won the renowned ARD Music Competition in 2011, audience and critics were thrilled by his range of expression and moving sound.

At a Beethovenfest concert titled "Inspired Oboe," Tondre performed Schumann's "Three Romances," written in 1849. Having fled the street fighting during the Revolutions of 1848, Schumann and his family were living in the countryside. Chamber music served as his personal retreat there. He wrote to a friend that it was as though "the storms outside drive a man deeper into his inner world."

Schumann wrote the romances as a gift for his wife, Clara - for Philippe Tondre a clear indication that Schumann thought of these miniatures as "love notes."

"For me it's an honor to play my favorite pieces here in the Schumann House," Tondre told DW. "The intimate space of the small library fits perfectly with the heartfelt character of the works."