Clashes in Istanbul as protesters defy May Day demonstration ban

Turkish police have fired water cannons and tear gas to disperse thousands of protesters defying a ban on May Day rallies in Istanbul's symbolic Taksim Square. Much of the city's public transportation was shutdown. 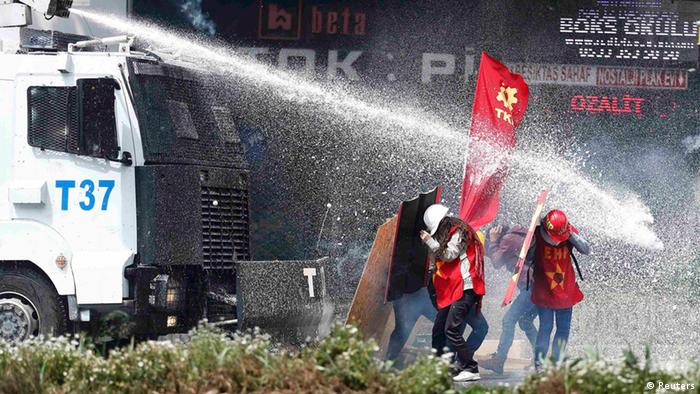 Hundreds of riot police using water cannons and tear gas moved in on protesters in the Besiktas district of Istanbul on Thursday as demonstrators tried to breach the barricades leading up to the symbolic Taksim square, where the May Day rallies were banned.

Protesters retaliated by throwing fireworks and rocks at police.

At least 70 protesters were injured and 19 members of the police force.

The Istanbul's governor's office said 142 people were arrested across the city.

Thousands of riot police were deployed throughout the city ahead of the protests, especially around Taksim, a traditional union rallying point. On the main Istiklal shopping street leading to Taksim, hundreds of police patrolled outside closed shops.

Prime Minister Recep Tayyip Erdogan said last week that he would not let unions march on the square and that protesters should "give up hopes" of reaching it on the holiday. However, activists and unions vowed to ignore the ban.

"We will be in Taksim despite the irrational and illegal ban. All roads will lead to Taksim on May Day, and our struggle for labor, equality, freedom, justice and peace will continue," the main unions said in a joint statement one day ahead of the protests.

Authorities issued a similar ban last year which sparked violent protests between police and protesters. That unrest was followed by weeks of mass protests which are widely regarded as one of the biggest challenges to Erdogan's rule since his Justice and Development Party (AKP) came to power in 2002.