A mass demonstration of some 100,000 workers in the Belgian capital has ended in clashes between protesters and police. The march was the first in a series of protests against new austerity measures. 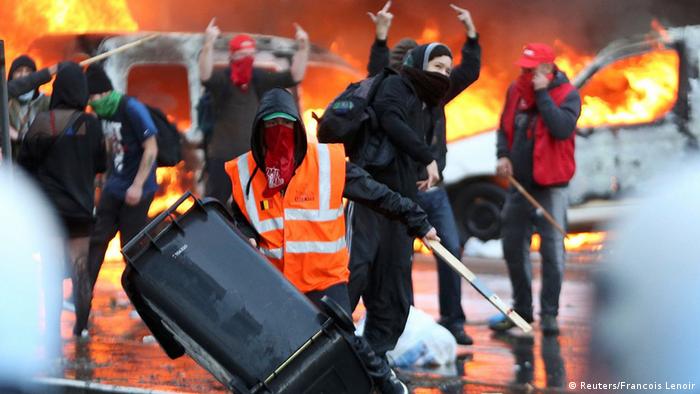 Belgian riot police fired tear gas and water cannon during clashes with demonstrators on Thursday, at the first of a series of anti-austerity demonstrations and strikes planned for the coming weeks. More than 100,000 people were on the streets of Brussels where they marched peacefully for almost two hours before violence broke out.

Car windows were smashed, other vehicles were overturned or set alight, and protsetors threw paving stones and fireworks. There were also reports of serious injuries among police as well as demonstrators.

As part of the reforms and cost-cutting measures, Belgium's one-month old, center-right government has pledged to raise the retirement age and limit scope for early retirement. An inflation-linked wage hike, due next year, will also be cancelled, and health and social security budgets are to face cuts.

Trade unions have described the reform plans, which intend to save 11 billion euros ($13.8 billion) during the current government's term in office, as "anti-social, imbalanced and unjust."

Belgians from various industries as well as students joined together, with unions estimating the number of demonstrators to reach almost 120,000.

"This is the biggest mobilization in years," Marie-Helene Ska of the CSC union told Belga news agency. "What strikes me is the presence of people who normally never demonstrate."

Marc Goblet of the FGTB union said the protests sent "a strong signal to the government."

Francophone President Charles Michel, who leads the business-friendly Reformist Movement (MR), was sworn in as the head of the new government in mid-October after months of coalition negotiations. His government also comprises three right-wing, Flemish-speaking parties, including the nationalist New Flemish Alliance (N-VA), which advocates the secession of Belgium's Flemish-speaking north.

The government, like those before it, will have to face the difficult challenge posed by the division between Flemish-speaking and French-speaking regions.

Thousands march in Belgium against austerity

Tens of thousands of Belgians have gathered in Brussels to protest against planned austerity measures by the new government. The march will kick off a month-long campaign against the reforms. (06.11.2014)

Activists protesting against austerity, mass surveillance and oppression have taken to the steets in some 481 cities worldwide. The Million Mask March was organized by the activist group Anonymous. (05.11.2014)

New Belgian government is sworn in after four-month deadlock

Belgium's new coalition government, forged after more than four months of tough negotiations between the parties, has been sworn in. Flemish parties, including the nationalist N-VA, dominate the line-up. (11.10.2014)