Clamping down on right-wing associations | Germany | News and in-depth reporting from Berlin and beyond | DW | 25.08.2012

In western Germany, authorities delivered a strong blow to the neo-Nazi scene by banning three groups in one day. But still around 150 right-wing "comradeships" remain active throughout the country. 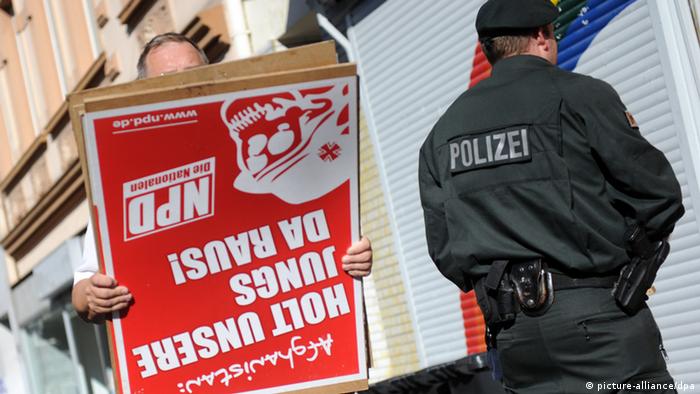 They are "xenophobic, anti-Semitic, and a danger for peaceful coexistence." That's how Ralf Jaeger, interior minister of the state of North Rhine-Westphalia (NRW), explained his ordered actions against three right-wing organizations.

On Thursday (23.08.2012), a total of 900 police officers took action against members of the "Kameradschaft Aachener Land" (Comradeship of the Region of Aachen), the "Nationaler Widerstand Dortmund" (National Resistance Dortmund) and the "Kameradschaft Hamm" (Comradeship Hamm). The police officers searched buildings, apartments and club headquarters in more than 32 cities in NRW, confiscating fire arms, batons and switchblade knives. 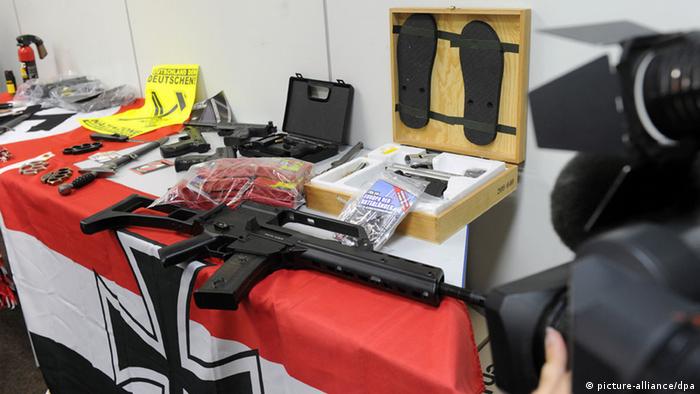 Jäger said that neo-Nazi groups had been considerably weakened by the manoeuvre.

The NRW internal security agency estimates the number of right-wing activists in the state at between 400 and 600. The city of Dortmund is reputedly a new center of their activity, said Fabian Wichmann of the Gesellschaft für Demokratische Kultur (Association for a Democratic Culture). The association oversees a program that supports right-wing individuals who want to leave the scene; and in Dortmund, too, they want to open up an office.

"In a sense, the city is a logistical hub for right-wing activists," Wichmann said, noting the example of a web hosting company seated there. "If their servers were shut down, a large number of German comradeships' websites would be gone."

An online social network for members of the scene, not unlike Facebook, also has its office in Dortmund. "All of these activities need to be looked into now," Wichmann said.

According to intelligence authorities in the state of Lower Saxony, the so-called comradeships originated in the 1990s. In the wake of arson attacks that claimed many lives, authorities there banned several neo-Nazi organizations. So neo-Nazis began looking for loopholes that would led them "try to organise activities through loosely-structured comradeships, thereby escaping law enforcement by the police. Internally, however, these organizations do have a rather rigid structure and an individual in charge," said Wichmann. 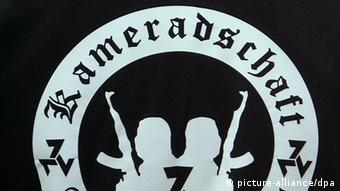 The "comradeships" are often closely networked with each other

Eastern Germany has long since ceased to be the only region making headlines with right-wing incidents. One example is a case from April 2011: Back then, 14 neo-Nazis violently pursued immigrants in the southwest German state of Baden Wuerttemberg. Now there are a total of about 150 known comradeships spread across Germany.

"It's a myth that right-wing extremism is an eastern German problem," Wichmann said. He added that, although there are a number of particularly aggressive groups of neo-Nazis in the area around Saxony, those were structures that had actually been created by the "cadres" from the West, after reunification.

"They realized there were many people whom the fall of the wall left without any orientation - and they simply exploited that fact," Wichmann said.

Members of the comradeships today aren't just the stereotypical skinheads in combat boots and bomber jackets.

"Nowadays this covers a broad spectrum - from the socially weak to well-integrated members of society," Wichmann said. Women are part of the scene, too, and "all are united in the pursuit of nationalism and their reverence for Hitler." 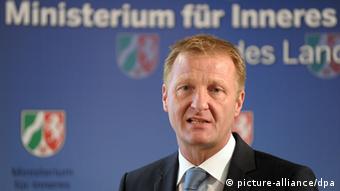 The comradeships are linked with each other across the country, usually via the internet: "Especially with the Dortmund-based groups we even see connections into the Czech Republic, Holland or Bulgaria - well-maintained ties used to exchange ideas," Wichmann said.

In its internal security report for 2011, the Federal Ministry of the Interior notes a moderate increase in acts of violence by right-wing extremists. At the same time, the number of people affiliated with the right-wing has gone down slightly. One reason for that is the decreasing number of right-wing party members. In 2011, just before its merger with the National Democrat Party (NPD), the Deutsche Volksunion (DVU), counted a mere 1,000 members. And the NPD, too, continues to see members turn their back on the party.

Little room for interpretation remains about the connection between comradeships and right-wing political parties: During their search in Dortmund, the police found 1,000 advertising posters for the NPD.

"It shows the close links of this right-wing extremist party with the violent neo-Nazi scene in NRW," Interior Minister Jaeger said of the find. One of the posters even bore the original signature of the former NPD chairman Udo Voigts.

The coordinated action against the three groups in NRW is part of a comprehensive series of actions against the neo-Nazi scene. Already in March, April and May, the NRW authorities had banned several right-wing extremist groups. 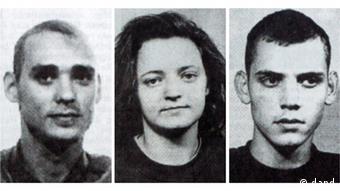 For years, the racist murders of the NSU trio went unnoticed

At the end of 2011, the existence of the right-wing terrorist group "Nationalsozialistischer Untergrund" (NSU) became known. News broke that the three group members had systematically murdered 10 people based on racist motives over a number of years. Although the trio appears to have carried out their crimes independently, the NSU was thoroughly connected with the extremist scene.

Wichmann believes this is one reason why German authorities are now rigorously clamping down on remaining right-wing networks.

"Dortmund has been trying to address that problem for a while already, but the NSU murders were most likely the last straw," Wichmann concluded.

A new report criticizes German authorities of downplaying right-wing violence. The report claims little has been done in the wake of the murders by the underground group NSU. (14.08.2012)

Three of Germany's top intelligence officials have now resigned in quick succession following a scandal surrounding the investigation - and alleged cover-up - of a string of neo-Nazi murders in Germany. (11.07.2012)