Citizen Reporters: Voice of the voiceless in rural Uganda

In the run-up to Uganda's presidential elections, access to information was vital, especially in rural communities. But the media rarely cover community issues - something that citizen reporting aims to change. 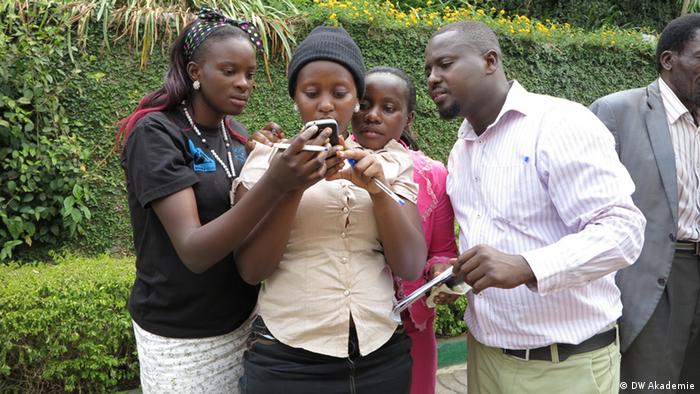 It's early in the morning on a steamy December day. Isaac Okot, dressed in trousers and an unbuttoned pink shirt, is sweating as he runs down the hill behind his house. In his hands is a square wooden box filled with mud. He turns the box upside down, removes the top part and shapes the mud with a spatula. He then removes the rest of the box and there it is: a solid red brick lying on the ground.

Okot lives in Atiak village about 70 kilometers from Gulu, the commercial capital of Uganda's Northern Region. On a good day, Okot can make up to one hundred bricks, but today he has to leave early. Apart from making bricks and being a farmer, the father of three is among 100 young Ugandans who have been recruited and trained by the Uganda Radio Network (URN) to work as citizen reporters. 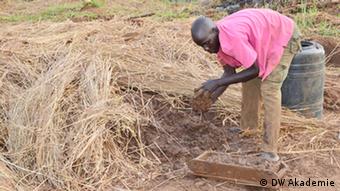 Apart from being a farmer, Isaac Okot is also a citizen reporter

"They taught us how to get the stories, to get the right sources and get information immediately," Okot tells DW Akademie. "They also gave us some tips... (telling us that) ...when a situation is tense, we should keep off. We were provided with a phone and taught how to send messages with that phone using the i-Alert."

For almost a year, Okot and other citizen reporters have been using a custom-based Android app known as i-Alert, which takes them step by step through the process of telling a news story. They use the app to send audio, pictures, and texts to report on issues that are of concern to their communities. "I get stories from village chiefs, parish chiefs, and sometimes the sub-parish authorities call me. I interview them, and then I send the story," Okot says.

Contributions from citizen reporters arrive at an internet platform hosted by URN, which is Uganda's largest radio news agency. Selected local radio stations from the URN network can access this platform and their journalists decide which news items they wish to pick up. They verify the facts, further develop the chosen news item into a story and then air it.

Among the stations benefiting from the program are Mega FM in Gulu and Buddu FM in the Masaka district. "I realized that the more you take the radio to the village, the more you earn your listenership at the local level," says Robert Nsubuga, News Editor at Buddu FM. 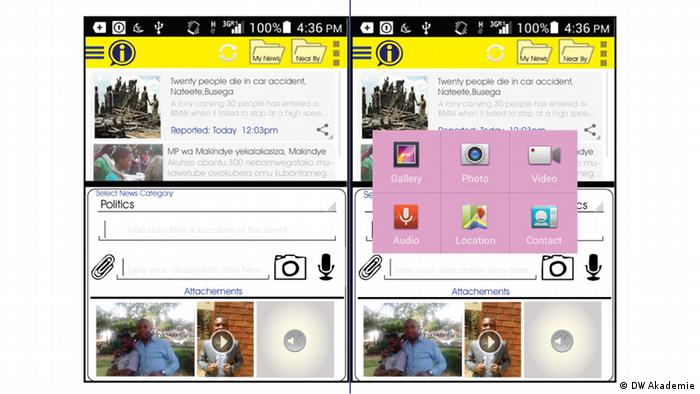 Screenshot of the mobile app i-Alert

Before the project started, Buddu FM depended solely on their few local reporters. Due to financial constraints, they were unable to report stories or research news very far afield. They usually ended up broadcasting the same stories carried by every radio station in the country. Citizen reporting has made Buddu FM and other local radio stations rich and colorful in stories. "I have seen the number of stories going up. Say in one month my reporters used to file 260 stories, now we have about 670 stories most of them from the i-Alert App" said Arthur Okot, news editor at Mega FM. According to Okot, citizen reporting has contributed to Mega FM's news bulletin expansion. Before it used to be 10 minutes, now it's half an hour.

When local radio stations decided to broadcast more local content, they also gained more audiences. "Because of the increased inflow of reports from wider communities, more people get attached to the stations we work with", says Isaac Mugera, URN's project coordinator. "This has increased the radios' listenership and potentially translates into more business from advertising from both commercial and non profit organizations."

In order to ensure the quality of the incoming news and to protect the safety of citizen reporters and their sources, the radio journalists of Radio Buddu, Mega FM and other participating stations act as mentors who constantly guide and support the citizen reporters in their tasks. 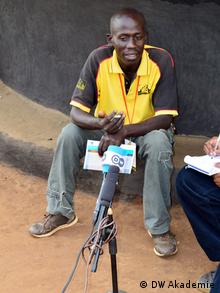 The voice of the voiceless

The story topics sent in by citizen reporters range from social and political events and issues related to the delivery of public services, to land conflicts and minor crime. Some of the stories about the daily struggles of Ugandans have generated debate and resulted in changes within the communities. "Once I reported about Atiak health center," says Isaac Okot in his role as citizen reporter for the Gulu District. "Nurses were not reporting in on time and not relating well with patients. I reported this concern on Mega FM, and eventually the nurses were transferred and the services at the center improved."

Local communities have welcomed this kind of reporting with great enthusiasm. A local leader in the Masaka Municipality told DW Akademie that the project had come at the right time. "We have so many pressing challenges but we do not have a voice, and reports done by citizen journalists have helped the community's voice to be heard."

Many ordinary residents say that when citizen reporters generate media attention for their concerns, it allows them participate in the broader social dialogue. "They are the voice of the voiceless… so very useful," says one citizen in Gulu. "They must continue although they are few. They should deploy more," says another from the Masaka district.

Together with DW Akademie, URN launched the citizen reporting initiative in 2014. Initially, two districts pioneered the project, and last year, URN and DW Akademie expanded it to include three more districts. The project is funded by the German Federal Ministry for Economic Cooperation and Development (BMZ). 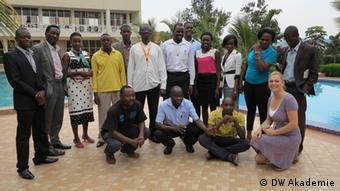 Training of citizen reporters with DW Akademie in Masaka, Uganda

Miriam Ohlsen is DW Akademie's country representative. She believes that the project can close an information gap and give local communities a chance to take part in public dialogue. "The project is 100 percent home-made: The app i-Alert was developed by young Ugandan techies. It is a local solution to a local problem," says Ohlsen.

Because of the excellent work of the citizen reporters, URN is now planning to further expand the project, improve the quality of reporting, and increase awareness among local radio stations and communities about how they too can use citizen reporters to strengthen the voices of the voiceless in Uganda.


Emmanuel Lubega contributed to this report.