Catholic reformists bemoan the lack of discussion of controversial issues at WYD. At the youth gathering they have been going on the offensive from day one. 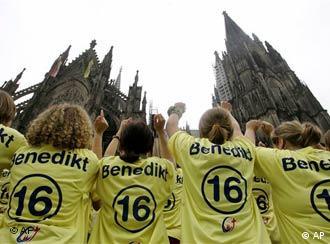 Not everyone at World Youth Day is on the same team

The pilgrims arriving in Cologne on Monday morning were certainly left in no doubt. World Youth Day (WYD) information points at the railway station and throughout the city center were already waiting on the youth from around the globe to provide guidance -- on navigating the city and the events of WYD that is. The city center appears dotted with stages that host the events of WYD, makeshift TV studios were being set up and posters of the new pope were gracing walls and shop windows.

One day before the official start of World Youth Day 2005 in Cologne things seemed to be running smoothly.

Critics on the ground from day one

But at the same time criticism was fermenting in the underground -- literally. In the basement of a luxury hotel some 10 minutes walk from the main station, the "World Youth Day 4 All" (WYD4All) coalition was also kicking off with their first press conference on Monday morning.

The coalition of grassroots organizations bemoans the lack of room the WYD affords to discuss let alone criticize the church's stance on controversial issues like contraception or the role of women.

Their Monday morning press briefing focused on HIV/AIDS prevention and the stance of the Catholic Church on the issue. By banning the use of condoms "our church leaders are putting the world population at risk," said Molly O'Gorman from the Washington-based organization Catholics for a Free Choice which is part of the WYD4All coalition.

Despite a host of matters and general themes on which critics disagree with the Catholic church, O'Gorman insists that the focus on a specific issue such as this can steer a lot more people into action. "It also leaves the Church leaders with very little wiggle room," she added.

Poster for gay and lesbian youths at World Youth Day

According to Catholics for a Free Choice a number of Catholic bishops around the world -- many from developing nations -- have softened their stance on condom use, including the Indian Catholic Bishop's Conference which has agreed to "provide all information about it" to couples seeking advice.

On a number of issues more and more bishops are coming out of the closet against the established views of the senior leadership including the pope. Molly O'Gorman is convinced that in the medium term this could lead to an internal revolution within the church. And this is backed by pressure from the grassroots: Surveys show that Catholics around the world are defying the official Vatican line in their daily lives.

How to address the crowd

But how do the critics carry their message to the believers attending World Youth Day? WYD 2005 resembles the "Communist World Youth Games," German WYD4All spokesperson Tobias Raschke told the left-leaning newspaper Tageszeitung recently. And just like in those mass events of the Cold War there is no room for the discussion of contentious but highly relevant issues, he said.

Only last week German bishops issued a statement that essentially labeled two of Germany's most prominent church critics personae non gratae at the World Youth Day. But Catholic youth appear to have remained surprisingly quiet in response. Many young people come for the party, admitted Raschke. But then why should they listen to the critics? "We know that young people do feel strongly about many of the issues. All we do is to provide information and the chance to discuss, if they so wish."

It remains to be seen how much headway the critics can make during World Youth Day 2005 in the face of seemingly overwhelming enthusiasm for the visit of the new Pope.

DW-WORLD's dossier on the events and issues of the Catholic youth festival.

Cologne's residents are used to dealing with crowds during Carnival, but now they expect some 800,000 visitors of a more spiritual nature as Catholic World Youth Day 2005 begins Tuesday. (Aug. 16, 2005)

Benedict XVI hopes this week's World Youth Day in Cologne will renew the faith of European Christians, who are in a state of "self-accusation," he said in the first interview of his pontificate. (Aug. 15, 2005)

Homepage of Catholics For a Free Choice

Homepage of World Youth Day 4 All