Artist Christo's orange floating walkway on a northern Italian lake closed after attracting over 1.2 million visitors, twice as many as expected. 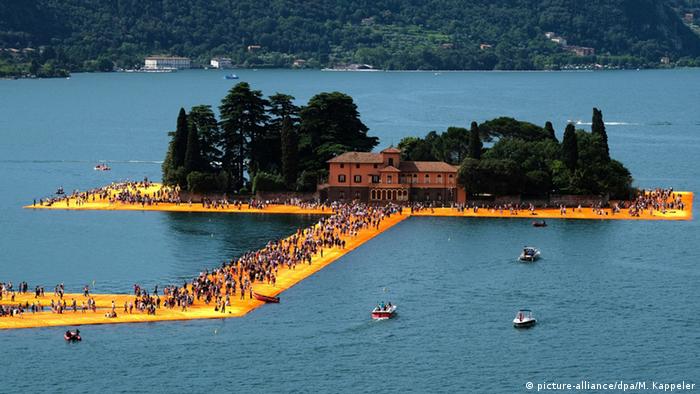 The three-kilometre (1.9-mile) undulating path made of 200,000 floating cubes has proved a major hit with the public since it opened on Lake Iseo in June. Covered in bright orange fabric, the pier stands in stark contrast to the dark water as it links the small islands of Monte Isola and San Paolo to the shore.
"People come from everywhere to walk to nowhere. Not to shop, not to meet friends, they just walk, to nowhere," said the Bulgarian-born American artist, who once wrapped Berlin's parliament in fabric. Visitors from around the world have flocked to try "The Floating Piers," many of them going barefoot to get an idea of what it feels like to walk on water.
Local officials said Christo's creation attracted a daily average of 72,000 people and a total of 1.2 million visitors over the 16 days it was open. Police estimates were even higher, at a round 100,000 per day. Shuttle buses from nearby carparks and trains from the closest big town, Brescia, were often suspended in order to keep the crowds manageable.
The installation, made of completely recyclable plastic, cost 15 million euros ($16.7 million) to create but has been free to the public.
Organisers said in a statement that Christo had financed the project himself through the sale of preparatory drawings and models.
Monte Isola mayor Fiorello Turla highlighted the boost to the local economy, adding that the project "will have lasting impact on the future of the tourist industry of our area."
Last month an Italian consumer group said the huge cost of cleaning up after the visitors and ensuring their safety raised questions about whether it should have been allowed.

While Christo had promised a 24-hour sensory experience, the local authorities at one stage closed the exhibit at night in order to allow for cleaning. There were dozens of medical interventions each day, including some that required hospital treatment. A medical post had to be set up to handle those overcome by the crowds or merely from waiting their turn in the heat.

Dismantling the structure was set to begin early Monday, after which the polyethylene cubes will be recycled. And while there will be no trace of the orange walkway within a short time, the organisers said it would live on online via Google street view.
"An important part of this project is the temporary part, it has a nomadic quality," said Christo.
The artist first rose to fame along with his late wife Jeanne-Claude for their eye-catching wrapping of famous landmarks like the Pont Neuf across the Seine in Paris in 1985.
A similar project at Berlin's Reichstag 10 years later took almost a quarter of a century of bureaucratic wrangling to get off the ground.