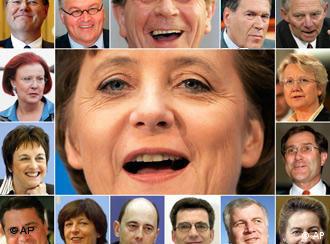 Angela says they will all get along

Chancellor-to-be Angela Merkel announced her cabinet with no surprises after a power-sharing deal that saw Chancellor Gerhard Schroeder step down after seven years gives his Social Democrats eight of the 14 cabinet posts, including the powerful finance and foreign ministries. The pact left the conservatives with the economy, interior, defense, agriculture, education and family ministries. 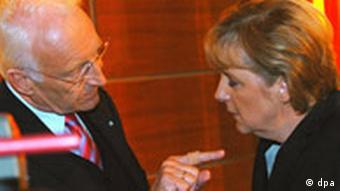 Merkel may be undermined by Stoiber

Bavarian leader Edmund Stoiber, the man who faces the task of turning around Germany's troubled economy, will have to prove that his provincial recipe for success can work for the whole country. The snow-haired Stoiber has long wanted to exchange his southern stronghold for Berlin, but a bid to become chancellor in 2002 ended in embarrassment when the conservative Christian Union alliance lost the general election by a whisker to Gerhard Schroeder's Social Democrats. Stoiber, 64, who leads the CDU's Bavarian sister party, the Christian Social Union (CSU), has shadowed Merkel throughout the election campaign and embarrassed the alliance with his frequent gaffes, often undermining Merkel. 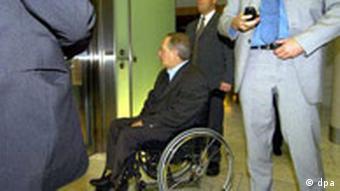 Schäuble made his peace with Merkel

Wolfgang Schäuble, once a confidant of conservative former Chancellor Helmut Kohl, is returning to the interior ministry job he occupied from 1989 to 1991. Some observers say the experience and political know-how of the wheelchair-bound former CDU chief could be crucial to the survival of Merkel's cabinet. Schaeuble "has to see to it that Merkel has a chance of governing properly, and that the power to determine policy stays in her hands and does not get taken over by a Muentefering-Stoiber axis", said the Sueddeutsche Zeitung, refering to Stoiber and Franz Müntefering, the SPD vice chancellor.

Merkel was opposed to Horst Seehofer, an influential figure in the left wing of the conservatives who has criticized her plans for radical reform of the health service. But Seehofer was successfully pushed through by his ally, Stoiber. The 56-year old politician served in the Kohl government as the health minister.

One of the leading members of the Christian Democrat government in the central state of Hesse, Jung revived his career after resigning in the wake of a finance scandal plaguing the CDU in 2000. Three years later, he made his comeback when the CDU won an absolute majority in regional elections in Hesse. The 56-year old has three decades of political experience in state ministries and in various posts within the party. 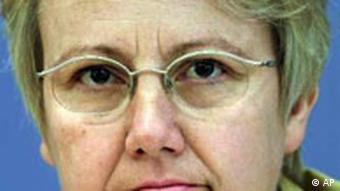 An ally for Merkel

The Baden-Wüttemberg culture minister is a strong Merkel supporter. The 50-year old is best known for her for her support of the ban of head scarves on female teachers in public schools: her state became the first to enact the ban. As vice president of the Central Committee of German Catholics, she espouses a conservative view social issues such as marriage, family and abortion.

The Lower Saxony social minister and 47-year-old doctor is also known for her large family: she is the mother of seven. The daughter of the state's former governor Ernst Albrecht, she has worked on heath reform issues and is a strong ally of Merkel. She is considered a CDU rising star and says her goals are to improve the situation of working mothers.

After playing tug-of-war with her own party, Germany's chancellor-designate, Angela Merkel, named her cabinet members on Monday, ahead of coalition talks aimed at forming the new government. (Oct. 17, 2005)

Merkel won her fight to oust the incumbent Chancellor Gerhard Schröder at the price of a power-sharing deal which gives his Social Democrats eight of the 14 cabinet posts, among them the powerful portfolios of finance and the foreign ministry. (Oct. 17, 2005)