The Free Democratic Party is the smallest of three parties set to form Germany's new government. Its chairman, Christian Lindner, has already been named as the new finance minister. 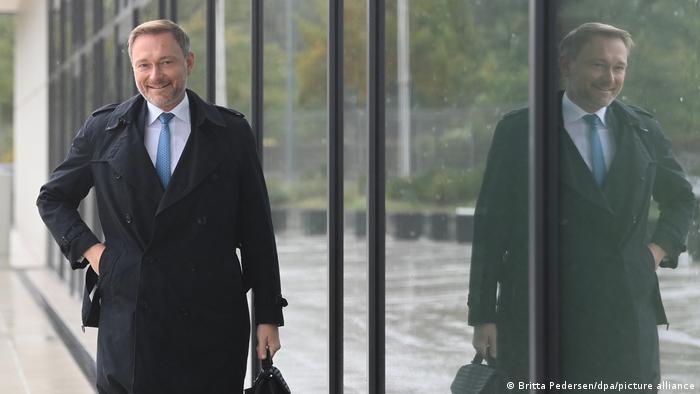 Christian Lindner is not known for hiding his ambitions

Christian Lindner, the head of Germany's neoliberal Free Democrats (FDP), has secured the country's most powerful office and is poised to take over the finance ministry. This emerged on Wednesday when the three parties about to form the next German government presented their coalition agreement under the title "Dare more progress."

The FDP can point to plenty of wins in the talks to form a new government: Germany's "debt brake" (a mechanism meant to stop the country from taking on new debt) is to be reapplied in 2023, having been lifted to cope with the economic fallout of COVID-19. And there is no mention of any tax increases in the new contract.

"I want to be finance minister," was his mantra throughout this year's election campaign — a tall order for a politician with no background in business or finance, and someone who has never run a government ministry.

The drive to quickly form a new government under the center-left leadership of Olaf Scholz (SPD) by the beginning of December, bears all the hallmarks of a politician who has often been first and the fastest.

Lindner was just 16 when he joined the Free Democrats in 1985. Within a year, he was the leader of the association of FDP high school students in his home state of North Rhine-Westphalia (NRW). At the age of 21, he became the youngest member ever of the NRW state assembly. It was around this time that the youthful Lindner picked up the nickname "Bambi" — a reference to the shy young deer in the classic Disney movie with the same name.

Meanwhile, he studied politics at Bonn University and became a reserve officer in the German air force. He was elected as a member of Germany's national parliament, the Bundestag, in 2009. In that year he also took on the key role of FDP secretary-general, the party's enforcer. And, at the ripe old age of only 34, he was voted in as party leader. 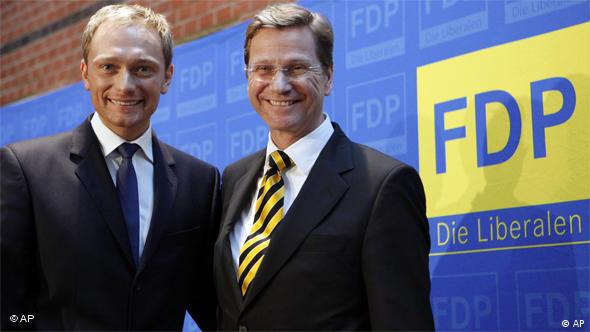 In 2009, Lindner (left) was the protege of late party chairman Guido Westerwelle

Lindner's rise to power was facilitated by the FDP dipping below the 5% threshold in the 2013 national election, losing representation in parliament for the first time in its history. It was a potentially disastrous development that meant the FDP faced the disgrace of irrelevance — and ignominy for a man who desperately wanted to make it to the top as quickly as possible, a man who appreciates the fast lane and likes to be seen at the wheel of his high-speed Porsche racer.

One FDP party stalwart, Gerhart Baum (a "true liberal" in the eyes of many of those skeptical about Lindner's motives), has closely followed Lindner's political career. "He's one of the most talented young politicians in Germany. And he has a remarkable capacity to shed light on complex issues," he said.

However, he also cautioned that Lindner could sometimes lose his "liberal compass." For instance, "when he opposed [Chancellor] Angela Merkel's decision that Germany should take in hundreds of thousands of refugees in 2015," said Baum. 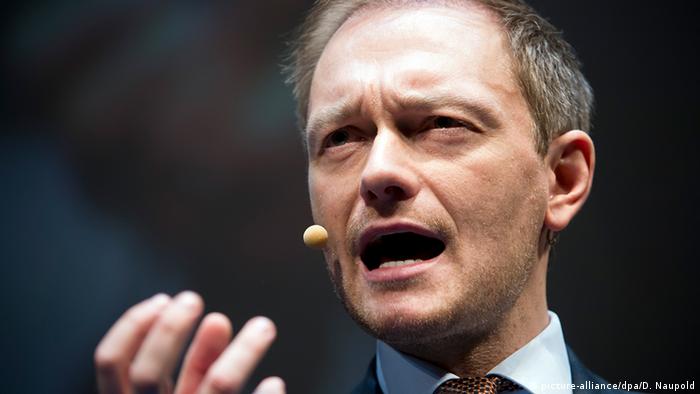 Lindner was critical of Chancellor Merkel's refugee policy in 2015

Quick to weigh his options

This September's Bundestag election changed Germany's political landscape. And while some ranking Free Democrats were still hoping to forge some sort of an alliance with their traditional partners, Merkel's conservatives (CDU/CSU), Lindner was already opening up lines of communication to a party that most Free Democrats had long viewed as anathema: the Green Party.

This was classic Lindner, rethinking the balance of power and quickly understanding that the only way back into government for his FDP would be to construct an unlikely three-way coalition of SPD, Greens and Free Democrats.

Down the decades, the FDP has played the crucial role of kingmaker in other coalition negotiations, helping to create a majority and form several governments, either with the Social Democrats or the Christian Democrats. So, there is a view that it is a natural role for the liberals.

By contrast, after the last federal election in 2017 Lindner spectacularly broke off coalition talks, believing the FDP was not getting a fair deal. "It is better not to govern than to govern wrongly," he pronounced. The FDP was shut out of the coalition, and he faced much criticism for his decision.

Lindner: Why talks broke down in 2017

These days, he is painfully aware that another such dramatic collapse will almost certainly bring with it his own demise. He might have been given a second chance — but there will not be a third.

For now, Lindner is happy to reinvent himself as a progressive leader promising to modernize a Germany that, many feel, has become dangerously set in its ways.

Political scientist Frank Decker told DW he believed history was unlikely to repeat itself. "Christian Lindner is damned to government," he said. 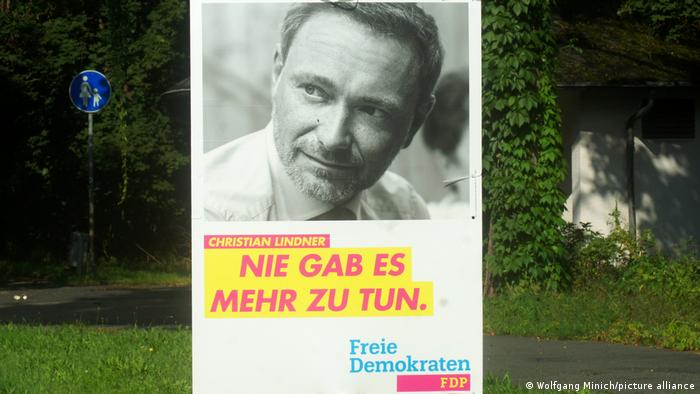 Flashback to Berlin — it's the last Saturday before the election and one of Lindner's final appearances after a long and grueling stint on the campaign trail. Sporting one of his many stylish suits, he appears on the scene and is quickly surrounded by a crowd of young men and women.

Especially young men. They get their autographs, and are clearly excited about what the FDP stands for.

No surprise, therefore, that the Free Democrats (alongside the Greens) were among the two parties that made big gains among young voters. For many, of course, Lindner is the main attraction. He stands for success. He is social media savvy. He is stylish. He's conscious of his looks and keeps fit wherever possible, mainly on a rowing machine. He has even had a hair transplant.

For his supporters, for his fans — he is cool.

He keeps up with social media, as seen by this personal Instagram post showing Lindner and his partner on vacation.

Lindner was once married to a journalist. After that ended in divorce, he entered into another relationship with a young journalist. He works hard to keep his private life just that: private. So many were surprised when, shortly before the election, he gave an interview to one of Germany's most popular gossip magazines, Bunte, expressing wishes to start a family soon.

What's more, he admitted to being confronted with a "thoroughly feminist perspective" by his second partner, in contrast to a reported propensity for macho humor.

With regards to the new government, Lindner insists he isn't necessarily interested in getting a ministry of his own — a statement that should be taken with a very big pinch of salt. He claims he would just as happily see "one, two or three of our young men or women" at the Cabinet table.

That is significant. After all, in the many years Lindner has been at the helm of the Free Democrats, there is one thing that he has certainly neglected: promoting women.

In party committees, in the Bundestag, among the party grassroots — when compared to the Greens, the Social Democrats and the Left Party, women in the FDP are drastically underrepresented.

Party veteran Gerhart Baum does, however, credit Lindner with working hard to overcome the image of the FDP as a one-man show. "He's increasingly doing what he can to encourage young party members, men and women. He's determined to dispel the impression that the FDP is a one-man party," he said.

This article has been translated from German and was updated since its publication on October 26.

The pro-business liberal democrat FDP have done well in the first regional elextions of 2021. Here's what you need to know about the small party that has a history of being the kingmaker.