Chorus of readers chimes in on Wagner festival

The 100th Bayreuth Festival showcasing Richard Wagner's works has readers getting in on the enthusiasm. They reminisced about their own Wagner experiences and offered some critiques of performances these days. 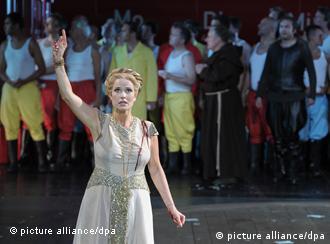 Love him or hate him, Wagner has always provoked strong opinions

Have you ever attended the Bayreuth Festival?

I am now 71 years of age, but I remember seeing performances of "Parsifal," the "Meistersinger of Nuremberg," "Lohengrin," "Tristan and Isolde," "The Flying Dutchman" and "Tannhäuser." Everything was done in what was the traditional style, and I loved it. One morning we toured the facility and I got to sit in the big conductor's chair in the orchestra pit. That was the thrill of a lifetime, one I will remember until the day I pass away. I would like to return to see a performance at Bayreuth again today, but when I read the reviews of today's productions, I am aghast at what the interpretations have turned into. I went to the Los Angeles "Ring" and felt I really wasted my money, as it didn't have anything to do with the story. I do like a current Wagnerian soprano who I first saw in Munich a few years ago. She is fantastic. Her name is Anja Kampe. -- Gordon W., USA

The next festival should have a competing "real" Wagner performance for opera lovers, nearby and at the same time as these phony, "Dadaist" childish expositions created by the show-off excretions of sick minds! -- "Skeptisch," USA

I just don't get the European thought that trashing an otherwise good opera creates art. We call it Eurotrash. -- John W., USA

Is Wagner your thing?

Oh, I like Wagner, but I would never rank him with Schubert, who is the greatest in my opinion. The problem with Wagner is his operas are too long, although well worth it if you can meditate on them by listening at home (where you can use the pause button). Outside of that, however, I prefer his protégé, Bruckner. -- G. Baur, USA

Yes, but only if Jonas Kaufmann is singing the tenor role. I listened from my bed at 3.00 a.m. to the opening "Lohengrin" in 2010. Mr. Kaufmann's performance made the early rise worthwhile. I recently travelled three hours each way by train to see the Metropolitan Opera's "Die Walküre," and once again I was thrilled to see a complete artist at work, as was the audience. I guess I have always liked Wagner, but Mr. Kaufmann has brought it into sharper focus. -- Lois B., Australia

Do you think opera like Wagner's can stay relevant in the wired world? (From our Facebook wall:)

Duh! Fantasy is really hot at the moment. And "Der Ring des Nibelungen" is an awesomely original fantasy story (for its day – and long afterwards). – Roeland K., Finland

Yes, there will never be a replacement for the art which Wagner's operas embody. Many people may be exposed to his operas on the Internet, while they otherwise would not have been. -- Salvatore R., USA

The Bayreuth Festival means sore bottoms and fashion faux-pas - so why do so many bother going? DW's Kate Bowen went to the Wagner capital to find out. (28.07.2011)