An official survey has shown Chinese manufacturing at its weakest in more than three years. The disappointing numbers underline jitters in the world's second-largest economy. 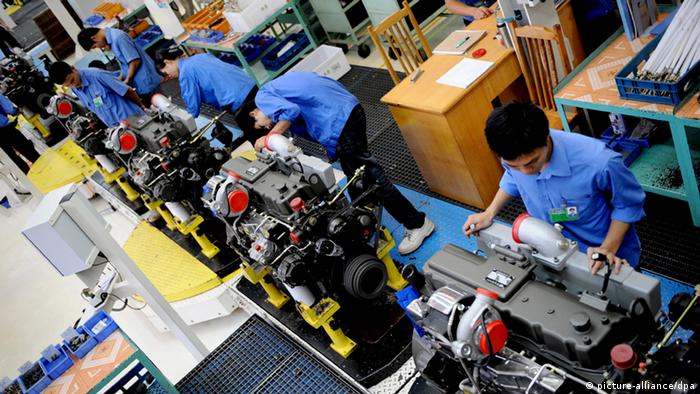 Weak demand from both domestic and overseas markets was blamed as well as falling commodity prices and manufacturers' reluctance to restock.

"Facing downward pressures on the economy, companies' buying activities slowed, and their will to restock was insufficient," the bureau said in a statement.

China's economy expanded 7.3 percent last year, the slowest pace since 1990, the Beijing government says, and at 7 percent in each of the first two quarters of this year.

A perceived decline among factory managers

Official economists say it decelerated further to 6.9 percent in the July-September period, its slowest rate since the aftermath of the recent global financial crisis.

But those statistics have been questioned by independent economists who suspect the figures are inflated. Some argue that the real rate of growth could be several percentage points lower.

Xi will be the most prominent statesman to visit Zimbabwe for many years as longtime President Robert Mugabe, 91, is mostly shunned by Western countries.

Then Xi and a Chinese delegation plan to fly to Johannesburg Wednesday ahead of the sixth Forum on China-Africa Cooperation (FOCAC), which will gather leaders from across the continent.

Seeking raw material to fuel its economy, China has heavily invested in Africa to become the continent's largest trade partner in 2009.

But there are worrying signs for this arrangement. Chinese investment in Africa fell by more than 40 percent in the first half of 2015 due to China's reduced demand for commodities such as oil, iron ore and copper because of the country's flagging manufacturing base.