While the effects of Chinese New Year in early February played a part, the figures were a surprise for market analysts. They come amid a global slowdown and ongoing dispute with the US over trade tariffs. 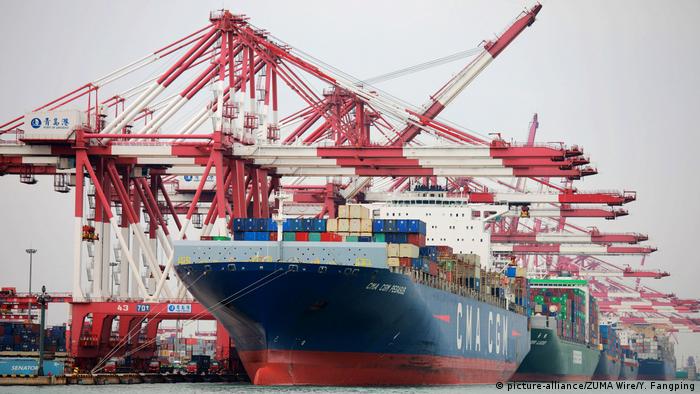 While Chinese export figures were up for January, they fell sharply in February, according to official data. They increased 9.1 percent in January, but fell 20.7 percent in February, compared with the same period in 2018.

Exports from China to its biggest trading partner, the United States, fell 14.1 percent to $52.3 billion (€46.6 billion) in the first two months of 2019, customs data showed on Friday.

Exports to the world dropped 4.6 percent overall to $353.2 billion for the two-month period.

The two months are taken together for analysis because of the Lunar New Year holiday, when factories close for up to two weeks.

Imports into China in January and February were down 3.1 percent from a year earlier at $309.5 billion, reflecting slowing domestic economic activity.

Disputes with the US

The figures come as China continues to negotiate with the US over tariffs on about $250 billion of Chinese products.

Foreign Minister Wang Yi said Friday that the two sides have made "significant progress" but he also criticized US legal action against Chinese companies and individuals as "deliberate political suppression."

Beijing would take "all necessary measures to resolutely safeguard the legitimate rights and interests of Chinese enterprises and citizens," Wang told a press conference. "We also support companies and individuals using legal weapons to protect their rights and interests and not to be silent lambs."

Meng Wanzhou, the chief financial officer of Huawei is fighting US extradition from Canada on charges of lying to banks about her dealings with Iran. Huawei is also facing charges of theft of trade secrets in a case in federal court in Seattle.

Washington is encouraging other countries to block Huawei involvement in developing 5G networks. It has warned that Huawei systems could be manipulated by Beijing for espionage and in essential communications.

The week also brought more indications of a slowdown in global demand.

The International Monetary Fund said it expects global economic growth to decline in 2019.

The European Central Bank warned of a sizeable reduction in the pace of economic expansion, leading it to keep interest rates at record lows and offer new, cheap loans to try to encourage growth in the bloc's economies.