Despite increased government efforts to stem the country's stock market plunge, investors have continued to dump Chinese shares, sparking concerns about the impact of the slump on other economies. DW examines. 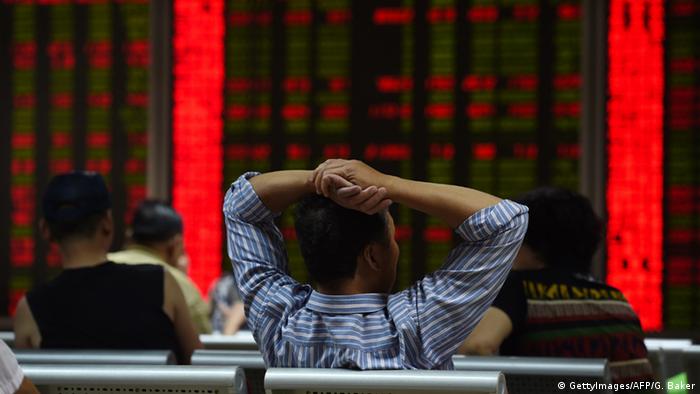 The more than 8-percent plunge in the Shanghai Stock Exchange on Monday, August 24, is the biggest single-day loss Chinese stocks have seen since the peak of the global financial crisis in 2007.

The drop came even after the authorities had taken steps over the weekend such as allowing the country's national pension fund to channel money into equities to prop up the market.

The measure was the latest in a series of moves made by Chinese policymakers in the recent past to control the country's highly leveraged stock markets.

They included authorizing a state-backed agency to buy stocks on behalf of the government, barring "big" investors from selling shares and injecting funds into the nation's banks to help stimulate the economy.

But the measures have so far failed to revive investor confidence and stem fears about the slowdown afflicting the Chinese economy.

GDP expansion in the world's second-largest economy is believed by some economists to have fallen below seven percent, the government's official growth target.

To boost faltering growth, the People's Bank of China (PBoC) - the country's central bank - has loosened monetary policy by reducing interest rates four times since November and has thrice lowered the amount of funds banks must hold as reserves - the reserve requirement ratio (RRR).

The PBoC is soon expected to make another cut in the RRR, which would enable banks to increase lending to people and firms.

Nevertheless, the impact of the stock market volatility and sputtering growth in China has also been felt in other markets where stock indices suffered substantial losses on Monday.

"Disappointment over China's decision not to announce further policy loosening over the weekend looks to have been the main trigger behind today's sell-off," said analysts Gareth Leather and Daniel Martin of Capital Economics, a London-based economics research consultancy.

The plunge comes amid renewed concerns that China's economy might be heading for a "hard landing," they wrote in a research note, adding that "the downside risks to short-term growth in China are overstated but investors are likely to remain wary until there is improvement in the data."

Panic selling gripped US and European stock markets on Monday after Chinese shares sank deeper, posting their largest intra-day fall since 2007 on worries that the Asian powerhouse was in for a hard landing. (24.08.2015)

China manufacturing tumbles, so do stocks

Biswas told DW that "the Chinese stock market crash has also heightened investor concerns about imbalances in the Chinese economy and further eroded investor confidence in the economic outlook."

While there have been signs of capital flight from emerging markets due to the market volatility in China, experts believe the risk of a financial crisis - similar to the one in 1997 - is still low as many countries have implemented substantial macroeconomic and banking reforms.

However, the vulnerability of emerging markets to a China slowdown has increased significantly over the last decade, because the country has become an important growth engine for the global economy and is also a key source of demand for commodities, stressed economist Biswas.

The Asian giant now accounts for 15 percent of the world's economic output and has contributed up to half of global growth in recent years. Moreover, China is the largest trade partner for a number of nations.

Other major economies therefore have seen their exports to the Asian giant take a hit as a result of weaker Chinese demand. China's growth slowdown has also contributed to the fall in the prices of commodities such as copper and oil, hitting commodity-exporting nations hard.

Furthermore, he noted that Brazil is particularly vulnerable since it is an important exporter of commodities such as iron ore and soyabean to China, and is exposed at present since its economy is already in recession. Also among the most vulnerable countries are Chile, Russia and South Africa, which are major exporters of commodities to China, Biswas pointed out.

The slump in the Chinese stock market comes amid efforts by China's policymakers to transform the country from being an export-reliant economy to the one driven by domestic demand.

But the ongoing market turmoil, coupled with slowing growth and growing concerns about bubbles building up in various sectors, have cast doubts on the authorities' ability to steward China's $10.3 trillion economy. However, experts believe the government still has the tools and resources to tackle the problems.

The country has about $3.7 trillion in foreign-exchange reserves that Beijing could tap into to overcome any serious economic challenges it might face. Furthermore, its economy is still expanding at a faster pace than that of any western nation.

Biswas argues that the main economic problem the Chinese government needs to address is the economic slowdown, since investor confidence in the outlook for the stock market cannot improve unless the real economy starts to rebound. The economist says Chinese policymakers have enough flexibility to deploy further monetary and fiscal stimulus in the coming months to boost economic growth.

"Although the bursting of the speculative bubble in the Chinese stock market has been dampened by government intervention and policy measures, investor confidence has evaporated and private money is still fleeing the stock market," Biswas noted.

"Until there is some evidence of a clear upturn in the Chinese economy, the stock market will likely continue to experience selling pressure."