Chinese shoppers have spent more than $30 billion online during the annual shopping binge, breaking last year's record. The massive spending comes despite an ongoing trade war with the US. 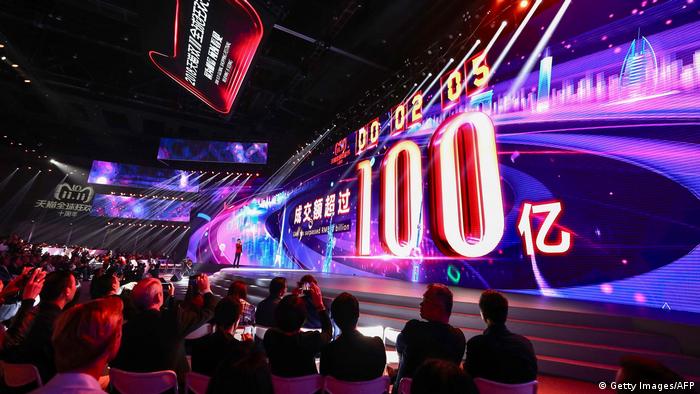 Consumers seemed undeterred by the challenges besetting the world's second-largest economy, buying more than $30 billion (€26.5 billion) from the e-commerce giant Alibaba during the 24-hour online retail frenzy. The shoppers shattered last year's record of $24 billion in sales during the annual event.

Alibaba recorded roughly $10 billion in sales in the first hour after midnight, as shoppers snapped up hot items including iPhones, furniture and milk powder starting pre-dawn.

The figures indicate that a tariff war with the United States, a stock-market slump and a growth slowdown across the economy have done little to blunt consumer appetite in the country.

Singles Day, which began in the 1990s as a spoof event celebrated by Chinese university students without romantic partners, has been co-opted by e-retailers who offer large discounts on products to bring about an annual profit windfall. The event is also known in Chinese as Double 11 because of the November 11 date.

In 2015, Singles Day beat the sales made on Black Friday and Cyber Monday combined, two of the largest shopping days in the US.

The event is of great concern to environmental activists, who criticize the huge amounts of waste produced by the packaging of the products bought.

Pledges by Alibaba and its rival JD.com to use "biodegradable" packaging to reduce waste have been met with skepticism by environmental organization Greenpeace, which says many plastics described in this way will break down only under high temperatures at a limited number of special facilities in the country.

Who is Alibaba's next chairman Daniel Zhang?

The founder of Alibaba, Jack Ma, has announced he will step down next year, handing over the reins at the Chinese e-commerce giant to Daniel Zhang — the current chief executive, who some believe will usher in a new era. (10.09.2018)

The mining collapse is among a spate of deadly incidents at mines in China. The country is increasing coal production to avoid a possible power crunch.