China has completed its longest manned space mission, with the return of its Shenzhou 10 spacecraft to Earth. The descent module and its three astronauts touched down after 15 days in space. 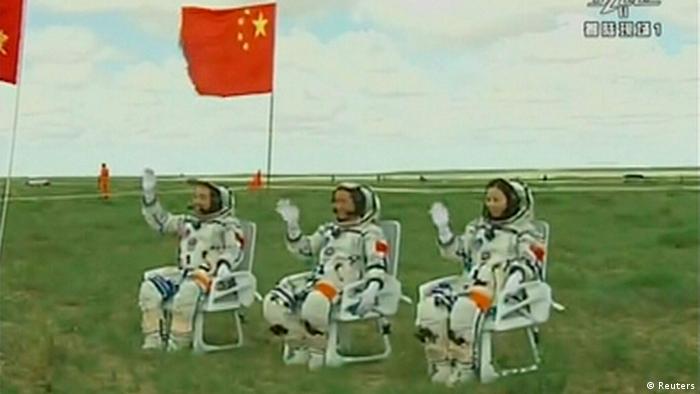 Technicians scrambled quickly to open the hatch before crawling inside to check on the condition of the crew, with the touch down shown live on state television. All three astronauts were seen wriggling out of the landing pod.

Chinese capsule back on Earth

"Space is our dream; the fatherland is our home," mission commander Nie Haisheng told the camera, adding: "Thanks to all compatriots who supported us."

Nie was followed out of the capsule by female astronaut Wang Yaping - China's second woman in space - and fellow astronaut Zhang Xiaoguang. All three were said to be in perfect health.

During the mission, Wang had delivered a video science lesson from space to Chinese schoolchildren, showing how various objects behave in zero gravity.

"I hope all our young friends may have beautiful dreams and may their dreams come true," said the astronaut, upon her return.

At the mission command center in Beijing, manned space program director Zhang Youxia said the mission had been a "complete success."

China's latest mission was the second crewed visit to the Tiangong 1 experimental space station, which was launched in 2011. The vessel is scheduled to be replaced by a three-module permanent station, Tiangong 2, in 2020.

China sent its first astronaut into space only in 2003, becoming only the third nation to achieve manned space travel independently.

The crew of one woman and two men landed after six months aboard China's newest orbital station. Their Shenzhou-13 spacecraft is the latest mission in China's drive to become a major space power.

The spacecraft reached the under-construction Tiangong space station hours after blasting off from Earth. Three astronauts will live there for around six months in China's longest space mission to date.

China has launched the main module of a permanent space station, marking another milestone for the country's extraterrestrial ambitions. The launch is the first of 11 missions needed to construct and supply the station.