Seeking closer military ties, China will participate for the first time in the world's largest naval exercise. But the move is unlikely to restore trust between Beijing and its neighbors, analyst James Holmes tells DW. 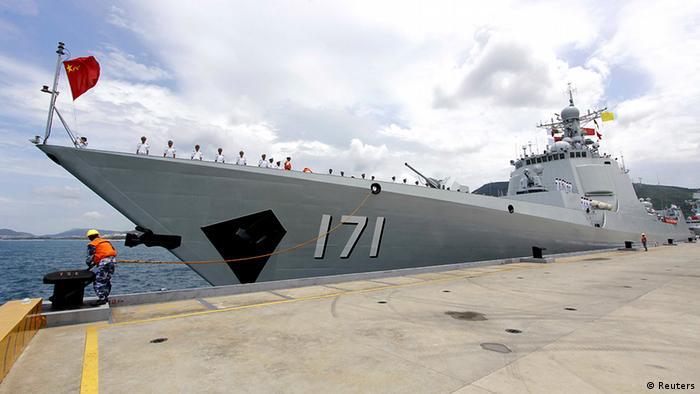 The world's largest international naval exercise, the Hawaii-based Rim of the Pacific Exercise - also known as RIMPAC - will take place between June 26 and August 1. For the first time ever, Chinese ships set sail to join the vessels of 22 other nations including Australia, Canada, France, India, Indonesia and Britain in the military drill which is hosted every two years by the US Pacific Fleet. According to media reports, China will be represented by the Haikou (a missile destroyer), the Yueyang (a missile frigate), the Qiandaohu (a supply ship), and the Peace Ark (a hospital ship). 1,100 Chinese officers and soldiers are set to take part in the exercise.

However, some of the participating countries such as Japan and the Philippines are key US allies which are currently embroiled in disputes with China over territories in the East and South China Seas. In a DW interview, James Holmes, a professor of strategy at the US Naval War College says that while RIMPAC may help the participating navies improve procedures and logistics, it is doubtful whether the venture will ease tensions in the region, especially regarding territorial disputes in the East and South China Seas where Beijing sees "core interests" at stake.

DW: Why did the US decide to invite China to participate in RIMPAC?

For a mix of political and operational reasons. Successive US administrations have sought to make a rising China a "responsible stakeholder" in the liberal maritime order as it currently exists, rather than a challenger to that order. Washington believes working together on the operational and tactical levels is a means to that end. 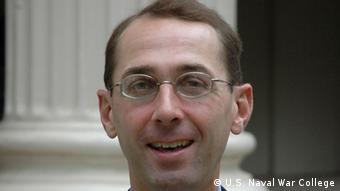 China and the United States have different views on what is needed to ease tensions, says Holmes

This is what international relations scholars call "functionalism." The idea is that if we work together, we not only develop combined capability - the capability to respond to natural disasters, for instance - but also build habits of trust and cooperation. Over time, if we continue pursuing exercises like RIMPAC and multinational operations, we will essentially get used to each other, and tensions such as those on display over the past few years will abate. That's the theory, anyway. How it works out in practice, we shall see.

Why has China decided to participate in this year's RIMPAC naval exercises?

For a mix of cooperative and competitive reasons. Let me list three. In my estimate, first of all, China truly wishes to cooperate with the United States beyond the China seas, where the views and interests of both nations are very much at odds. RIMPAC and similar enterprises open up the option of working together in the Pacific Ocean or Indian Ocean, or potentially elsewhere. For instance, the navies of both countries have gotten along rather well policing the Gulf of Aden.

Second, multinational exercises help China raise its profile as a great seafaring nation. It burnishes its prestige if its ships and aircraft perform well under foreign scrutiny. And third, sailing with the US Navy exposes the PLA Navy to the tactics, techniques, and procedures used by the premier sea service of the age. Observation helps Chinese mariners improve their own practices. It also gives them an idea what they will be up against should the countries ever get in a tussle, and helps them think through how they would respond.

What is the symbolic importance of this exercise?

It is designed to ease tensions. Both governments want that, so do their allies, friends, and bystanders. The devil, of course, is in the details, as there are different interpretations of what the term "easing tensions" actually means. For the United States, it means China's acquiescing in the Asian order over which the US Navy has presided since 1945. On the other hand, China defines easing tensions as the United States' deferring to China's desire to make the rules governing military activities in waters and skies claimed by Beijing. However, I am of the view that this would carve out a zone of exceptionalism within the law of the sea, and potentially degrade the law of the sea worldwide.

These are big political and strategic questions, not the sort of thing we're likely to resolve by sending our fleets out to steam together for a few weeks. RIMPAC and other endeavors are worth doing because they put the capacity in place for our navies to cooperate should political leaders see the need. But I am a confirmed skeptic about the potential of tactical and operational cooperation to shape relations between nations on the highest levels. I hope events prove me wrong, but I doubt they will.

What will this allow the Chinese, US and Japanese navies to do?

Such exercises are helpful because they build capacity. Sailors learn and hone their proficiency by going to sea, and by operating with likely partners under as realistic conditions as possible. That way they don't have to improvise procedures, logistics, communications protocols, and so forth after the next typhoon, tsunami, or humanitarian catastrophe. That in itself justifies the expense and hassle of combined exercises. 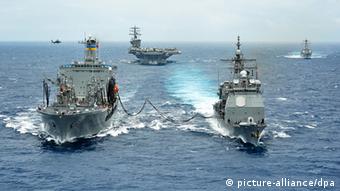 Holmes doubts the naval drill will ease tensions in the East and South China Seas, where Beijing sees "core interests" at stake

I should note, however, that RIMPAC will do little if anything to improve the ability of China's and Japan's fleets to cooperate. The two contingents will apparently remain entirely separate throughout the maneuvers. Things are that bad between Beijing and Tokyo. Should the two countries come to some sort of accommodation in the East China Sea, then future RIMPACs could see Sino-Japanese collaboration at sea. For now, we will see a hub-and-spoke dynamic prevail, with the US Navy as the hub and the Chinese and Japanese navies as two disparate spokes.

Are the US and China seeking closer military ties?

They are seeking closer military-to-military ties for the reasons catalogued before. I personally doubt this venture will pay off on the political level. No one has ever satisfactorily explained the mechanism whereby cordial working relations between militaries shape relations between the politicians who use these tools to advance political purposes. In a sense RIMPAC constitutes a laboratory experiment, letting us put this hypothesis to the test.

What impact will the joint exercise have on the current tensions in the East and South China Seas?

I doubt it will have much impact at all. The rules of the game are different in the East and South China Seas, where Beijing sees "core interests" at stake - interests for which Beijing is prepared to fight - and America sees a threat to freedom of the seas and skies. 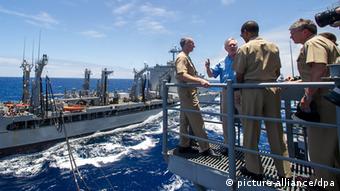 At RIMPAC, sailors hone their proficiency by going to sea, and by operating with likely partners under as realistic conditions as possible, says Holmes

No amount of steaming around Hawaii together is likely to ameliorate such a fundamental clash of interests. Developing the capacity to work together is worthwhile. But I would be surprised to see RIMPAC relax tensions within the first island chain. That's a rather downbeat forecast, but it's mine.

Is China likely to take part in other US-led military exercises from now on?

It all depends on how things stand between the two countries. China has a habit of agreeing to do things with other countries, then pulling out at the last minute to show displeasure if something objectionable happens.

James Holmes is Professor of Strategy at the US Naval War College and co-author of Der Rote Stern über dem Pazifik (Mittler-Verlag, 2011). He was a student at Universität Regensburg in 1986. The views voiced here are his alone.