China: When poetry saves you from the factory

Losers or winners of globalization? At the Berlin poetry festival, Ai Weiwei and Yang Lian connect through verse and on a T-shirt, while a Chinese factory worker becomes a literary star through her migrant worker poetry. 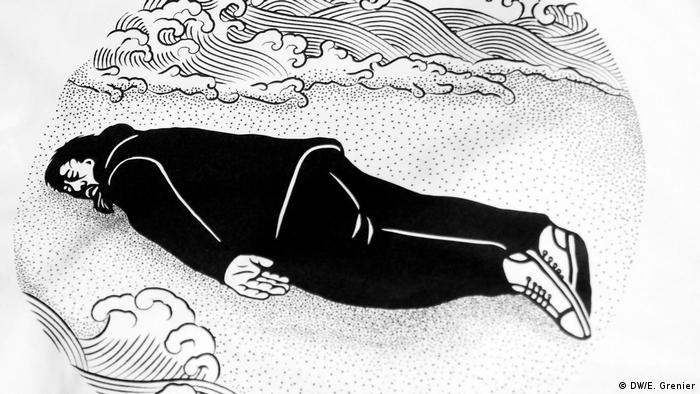 It was not one among Ai Weiwei's most technically ambitious works, yet it certainly remains one of the most controversial ones: the portrait of the artist reenacting the pose of drowned Syrian migrant toddler Alan Kurdi, whose lifeless body photographed lying on a beach became iconic of the plight of refugees.

Adding yet another meta level to the portrait of the artist, there's now a T-shirt featuring a drawn version of "Ai Weiwei on the beach." At first glance, the cartoonish self-reference probably won't change the minds of those who found the artist's reenactment tasteless in the first place.

But then a simple verse by poet Yang Lian, printed on the back of the T-shirt, adds to the power of the repeated motif — making one wonder if we shouldn't all take a moment to recreate the pose too:

"Refusing to let / the poem sink into / dead indifferent / beauty."

The T-shirt was revealed on Tuesday at an event called Elegy and Upheaval, held during Berlin's poetry festival organized by the Haus für Poesie, which brought together three Chinese artists: Ai Weiwei, Yang Lian and Zheng Xiaoqiong. 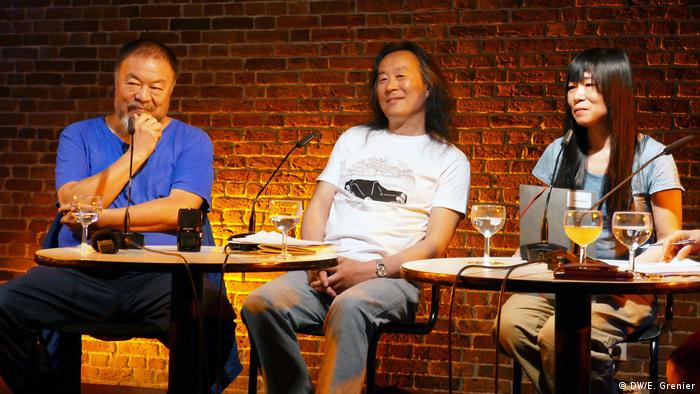 The biographies of artist Ai Weiwei and author Yang Lian, born respectively in 1957 and 1955, feature a surprising number of similarities. Mao Zedong's Cultural Revolution disrupted their families' lives; both of them had to spend time in labor camps as children.

They are both currently based in Berlin, living in exile after facing the repression of Chinese authorities.

While Yang Lian is an established poet, the works of Ai Weiwei, the son of one of China's most important modern poets, Ai Qing, feature different forms of poetry. His latest documentary, Human Flow, speaks through verses by different poets, including the Turk Nazim Hikmet, the Syrian Adonis or the Palestinian Mahmoud Darwish.

At the Elegy and Upheaval event, Yang read excerpts from two of them. Written while Ai was detained in China, "A Sunflower Seed's Lines of Negation" refers to one of his famous installations shown at the Tate Mode gallery in 2010-2011 and to repression. It finishes with the verse printed on the T-shirt.

"Venice Elegy - A poem on sinking" is the title of Yang's latest poem, which deals with the victims of migration and globalization — the focus Ai Weiwei's work for the last three years. The verses of this poem refer to the romantic imagery of Venice, but the swaying gondolas turn into overfilled boats that sink into the Mediterranean. 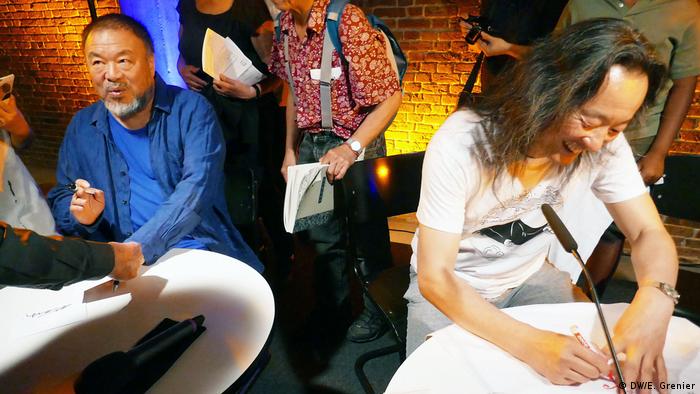 Ai Weiwei and Yang Lian signing the T-shirt and books

While Ai Weiwei's star name obviously contributed to getting the media to cover the event, the most refreshing guest of the evening was poet Zheng Xiaoqiong.

Born in 1980 in the Sichuanese countryside, Zheng Xiaqiong grew up in an extremely poor family. "We were happy when we had something to eat once a week," she said.

She became a migrant worker in 2001. While working in different cheap-labor factories in metropolitan Dongguan, Zheng wrote poems about the brutal working conditions and the insecurity she experienced there.

Because of China's strict laws tying residents to their home area, a majority people automatically become "illegal" in their own country when they decide to migrate to another region for work.

"It's hard to think of anywhere in the world where becoming a poet is a canny career move, but this is especially true for the poorest and most disadvantaged trying to gain a foothold in the factories of China's frenzied special economic zones," wrote Megan Walsh, a Chinese media expert. This statement certainly applies to Zheng, one of the representatives of migrant worker poetry, a genre that's been growing in popularity in China.

In 2007, the then-unknown author surprisingly won a major award in China, the Liqun Literary Prize, allowing her to leave the conveyor belts and work for a magazine publisher in 2008. She is regularly invited to travel to poetry readings around the world; her next stops following Berlin are Hamburg and Bremen. 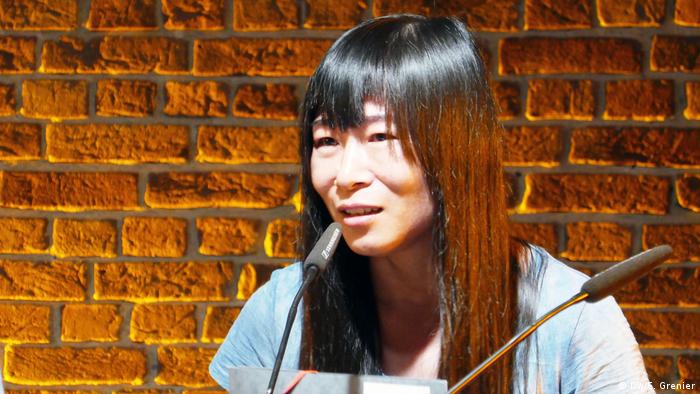 The complex reality of globalized China

While domestic political repression was the main enemy for the activists of Ai Weiwei's and Yang Lian's generation, "Today's reality in China is way more complicated than before the end of the Cold War," pointed out Ai.

Globalization leads farmers to work in factories producing goods for the rest of the world, which reduces them to the lowest-level workers on the planet, said Yang. The current situation "is connected with the cynicism and greed of the entire world," he added.

"While I was building those little pieces, I felt connected with the entire world," Zheng explained before reading a poem expressing how the illnesses that developed through those jobs actually felt: "I suppress the pain / with effort the rage."

Despite having left the factory world, Zheng is still in touch with her former co-workers and continues to deal with their experiences in her writing.

She told DW that she hadn't faced problems with the authorities because of her work, and that in any case, what counted most to her, she said, was that she was acting on her conscience. "That feels good."

Or as she writes in another poem about the fate of her fellow workers:

"Every meaningless life has endless meaning."