China's Premier Li Keqiang has told EU officials that his country is committed to market reforms and will stay determined to tackle a steel capacity glut that has sharpened tensions between China and the EU. 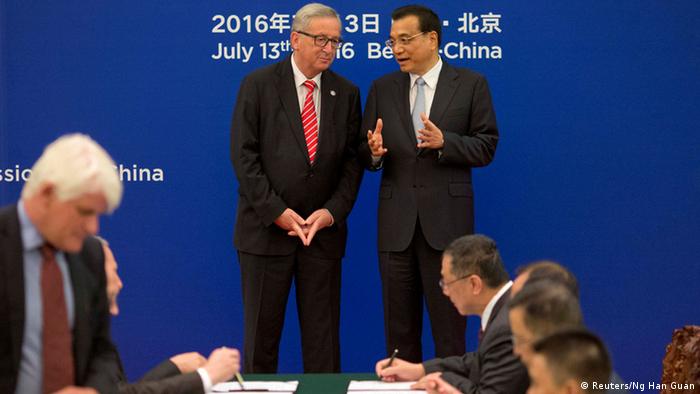 Speaking at an EU-China business summit in Beijing on Wednesday, Li Keqiang said China had always abided by its commitments on reform, and would work to improve market access for foreign companies in the hope that all firms could compete on a level playing field.

"We want trade between China and Europe to grow on a stable platform," he told EU officials that included European Commission President Jean-Claude Juncker and EU Trade Commissioner Cecilia Malmström.

In his address earlier in the event, Juncker urged Beijing to remove unfair restrictions that make it difficult for European firms to compete with local rivals and improve legal certainties. Juncker warned that China's huge industrial overcapacities, notably in steel production, should not be allowed to hurt bilateral relations.

China is by far the world's biggest steel producer and its annual output is almost double that of the EU. According to EU steel producers' association Eurofer, the country has excess capacity of 400 million tones a year and is selling into export markets at below cost after a slowdown in demand at home. China's push has already led to plant closures in Britain and elsewhere, sparking a rise in anti-dumping complaints from the EU and the United States.

Premier Li insisted that China was taking strong and determined measures to tackle the problem of overcapacity, adding that China does not use subsidies to give its industries a competitive edge.

"China's will to solve the problem of steel overcapacity is resolute and our measures are effective," Li said. "We hope that the European side can look at this issue from an unbiased perspective."

Li also said that China was willing to speed up negotiations with the EU to secure bilateral investment deals, adding that the country's growth was sound but not yet strong.

German engineering giant ThyssenKrupp has reported a steep drop in net earnings for the first half of its business year. The firm said the ailing steel business contributed to the development in no small way. (10.05.2016)

The US, EU, Canada, Japan, Mexico, South Korea, Switzerland and Turkey have called for urgent changes in the industry. They urged countries not to subsidize or sustain loss-making steel plants. (20.04.2016)