China has shipped hundreds of thousands of much-needed coronavirus vaccine shots to Sri Lanka over the past few months. Observers say it could help support Beijing's geopolitical interests and bolster influence. 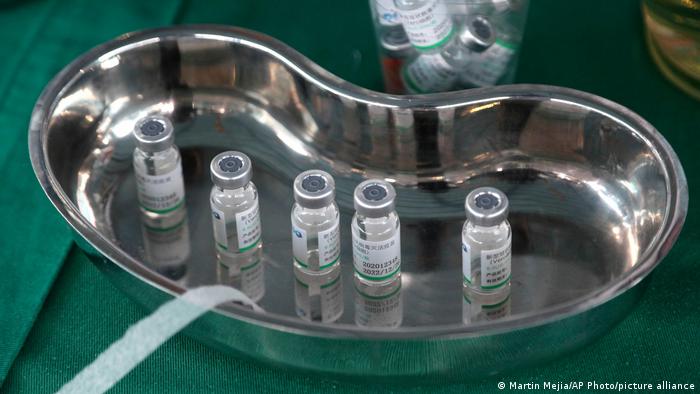 Over the past few months, China has been boosting its vaccine diplomacy efforts, pledging and shipping increasing numbers of COVID-19 vaccines to a number of countries worldwide, particularly in Asia.

Sri Lanka recently received 600,000 doses of China's Sinopharm vaccine, which would be used for the vaccination of about 200,000 Chinese workers estimated to be living in the island nation.

When the pandemic hit Sri Lanka, China also donated thousands of masks and testing kits, as well as health equipment.

Although Sri Lanka's National Medicine Regulatory Authority (NMRA) has approved the decision to bring in the Chinese vaccine, the agency has not given the green light for its emergency use.

In January, the South Asian nation also received a large shipment of the AstraZeneca vaccine produced in India and plans to acquire shots of Russia's Sputnik V vaccine.

More than 900,000 of Sri Lanka's 21 million people have received at least one dose of the coronavirus vaccine so far. The country has recorded more than 90,000 infections since the start of the pandemic, with nearly 1,000 related deaths.

By supplying vaccines to countries such as Sri Lanka, China is looking to showcase its global health leadership to lower- and middle-income countries.

"Any humanitarian diplomacy that national governments conduct has some motives that directly or indirectly support national interests," Miwa Hirono, a professor at the Graduate School of International Relations at Ritsumeikan University, told DW.

China's humanitarian actions in the past have been "multifaceted and complex," with decisions often made ad hoc, she said.

Hirono is collecting data on Beijing's humanitarian assistance during the pandemic but sees no correlation between vaccine donations and the scale of China's investment in a recipient country.

The fact that early vaccine aid was given to countries such as Cambodia and Pakistan, which support China's Belt and Road Initiative (BRI), merits further research into this, Hirono said.

Vaccine donations to countries such as Sri Lanka, Nepal and Pakistan, among others, are done "to help our friends," a Chinese official who asked to remain anonymous told DW. "These countries are friends of China and helped the country at the start of the pandemic," he said.

Though China's vaccine diplomacy is getting off to a strong start, the government appears to be encountering stiff competition and tough questions from abroad.

The security analyst Asanga Abeyagoonasekera told DW that there are "serious concerns that China is raising pressure on Sri Lankan authorities to get approval for the Sinopharm vaccine."

"Authorities in Colombo are taking their time. They have asked many questions and awaiting response from China," he said.

Abeyagoonasekera said China had switched to a "softer diplomatic approach."

Still, there is growing concern that where vaccines go, China's influence will follow.

"Recent developments show an increase in Chinese influence over Sri Lanka — be it through vaccine diplomacy or infrastructure diplomacy," Abeyagoonasekera said. "One cannot ignore Beijing's role in the country's affairs."

Abeyagoonasekera said Sri Lanka's foreign policy appeared to be neutral, but it is not. Colombo is "bandwagoning" with Beijing, he stressed. "The decisions taken by the government are tilted more toward China."

Ties between the countries are "multilayered," but China's growing influence "is a bit worrying," Abeyagoonasekera said, arguing that it endangers Sri Lankan democracy and could push the nation toward a different governing model.  "This is a long-term worry I have as an analyst."

Rohan Samarajiva, founding chair of the policy think tank LINREAsia in Colombo, said China's vaccine shipments had received greater publicity in the country than India's had. There is an extra dose of gratitude toward the Chinese, he told DW.

China's support for Sri Lanka at the UN Human Rights Council in Geneva also contributes to closer bilateral ties, Samarajiva said. "All the talk and aid of the US or Europe pales in comparison to what China is doing," said Samarajiva.

Sri Lankan media tend to portray China in a positive light, particularly as the pandemic-related assistance has come, Shakthi De Silva, a visiting lecturer at the Department of International Relations of the University of Colombo, told DW.

There isn't much coverage on the underlying reasons behind the vaccine deliveries, De Silva said.

In the past, Sri Lankans took to the streets in protest when they saw that China was acquiring critical infrastructure in the country such as the Hambantota port. Sections of the Sri Lankan population viewed Beijing with mistrust, De Silva pointed out. "Hence, the vaccine and mask diplomacy have helped bolster China's soft power and rebuild its tarnished image."

Abeyagoonasekera shared a similar view. "Vaccine diplomacy will definitely add to the infrastructure diplomacy and will further strengthen the bilateral relationship," he said.

Sri Lanka's controversial policy to cremate the bodies of COVID victims has outraged Muslims, for whom cremation is forbidden. Critics say the decision isn't based on scientific evidence and targets minorities.