China 'should prepare for conflict' over South China Sea

An influential Chinese newspaper has warned that Beijing must be ready for war over the disputed South China Sea islands. The commentary comes a week before an international court is due to rule on the feud. 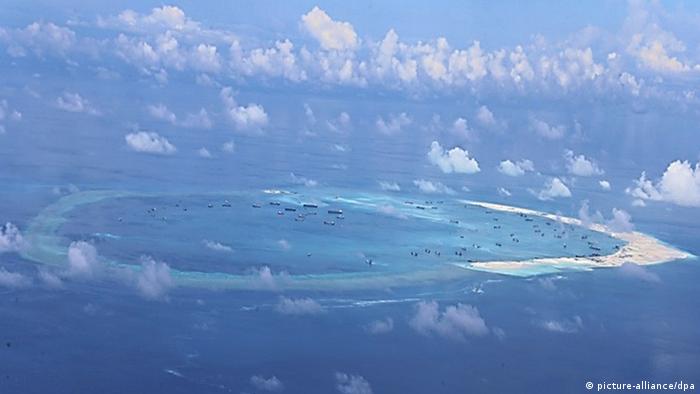 In joint editorials in its Chinese and English editions, the state-run Global Times said the threat posed by the tribunal's ruling over the Spratly Islands and Scarborough Shoal in the South China Sea posed a threat to China's sovereignty.

It said the dispute had already been complicated by US intervention, with Washington deploying two carrier battle groups in the area. The US has also strengthen ties with Manila in recent months.

The paper said while "China hopes disputes can be resolved by talks, it must be prepared for any military confrontation," and called for Beijing to speed up developing its military deterrence abilities.

"Even though China cannot keep up with the US militarily in the short-term, it should be able to let the US pay a cost it cannot stand if it intervenes in the South China Sea dispute by force," it said.

Despite China being a "peace-loving country ... it won't flinch if the US and its small clique keep encroaching on its interests on its doorstep," the editorial added.

The Global Times is published by the ruling Communist Party's official People's Daily, and while it is widely read in policy-making circles it does not have the same mouthpiece function as its parent.

China has already announced it will conduct military drills ahead of the July 12 ruling by the International Court of Arbitration at the Hague.

The Manila government launched a complaint in 2013 over who owns Spratly and Scarborough and other areas of the South China Sea, which China claims as its own.

Many analysts expect the tribunal to rule in the Philippines favor. But China said refused to accept the judgment, instead calling for bilateral talks. On Monday, the China Daily reported that Beijing was ready to start negotiations with Manila if they ignored the ruling.

The Philippines, Vietnam, Malaysia, Taiwan and Brunei also have claims with China over parts of the strategic waters, which sees around $5 trillion in ship-born trade pass through each year.