China has signaled cooperation in the dispute over its artificial islands in the South China Sea. The contested waters have taken center stage at the ASEAN regional security talks. 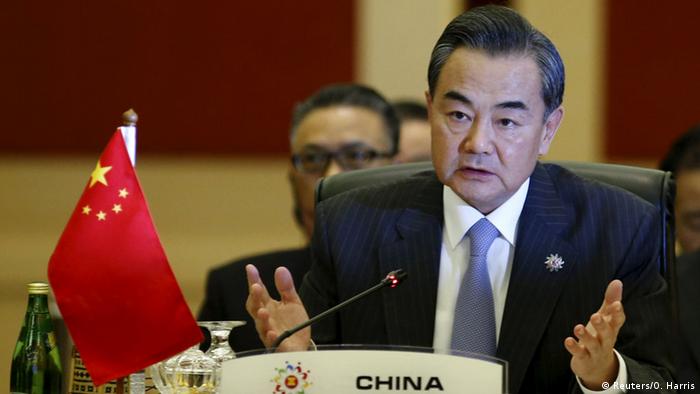 China and the Association of Southeast Asian Nations (ASEAN) agreed to speed up consultations on a Code of Conduct for the South China Sea, the foreign ministers of China and ASEAN member Thailand declared on Wednesday.

China's Foreign Minister Wang Yi also told a joint news conference with Thai Foreign Minister General Tanasak Patimapragorn after a China-ASEAN meeting that non-regional countries should refrain from actions that might escalate or complicate the situation in the South China Sea.

China's top diplomat confirmed the halt to the controversial reclamation of islands in the South China Sea on Wednesday during a meeting of Southeast Asian foreign ministers, according to Reuters news agency. The declaration came after ASEAN ministers and US Secretary of State John Kerry had brought up the issue of the South China Sea.

Beijing has been expanding tiny reefs and constructing military posts to reinforce its claims over the strategically important shipping route, worrying neighboring countries the Philippines, Vietnam, Malaysia, Taiwan and Brunei, which also claims over those waters. The US also fears that China's artificial islands could impede freedom of navigation in a major transit area for the world's oil and merchandise.

Before traveling to the ASEAN talks in Malaysia, the Chinese foreign minister had warned that attempts to bring the controversial issue up at the ASEAN meeting were "counter-productive" and would "heighten confrontation." He underlined that disagreements should be discussed on a bilateral basis between rival claimants, not during formal meetings at the forum.

The United States and Southeast Asian countries called for Beijing to halt its island construction activities, which have dominated discussions at the ASEAN security forum in Kuala Lumpur.

US Secretary of State John Kerry told Southeast Asian foreign ministers on Wednesday that the United States shared their desire for negotiated settlements to contested claims over territory in the South China Sea.

"We want to ensure the security of critical sea lanes and fishing grounds, and we want to see that disputes in the area are managed peacefully and on the basis of international law," Kerry said in Kuala Lumpur.

According to a senior official quoted by AFP, Kerry reiterated concerns about the rising tensions and "China's large scale reclamation, construction, and militarization of features" in a closed-door meeting with Chinese Foreign Minister Wang Yi earlier on Wednesday.

Southeast Asian foreign ministers have started regional security talks with an agenda full of conflicts. China's neighbors are worried about the country's controversial island-building in the South China Sea. (04.08.2015)