Blackouts and power cuts in the world's second-largest economy have drawn attention to fuel supply problems that could complicate the country's pandemic recovery. DW unpacks why the lights went out in China. 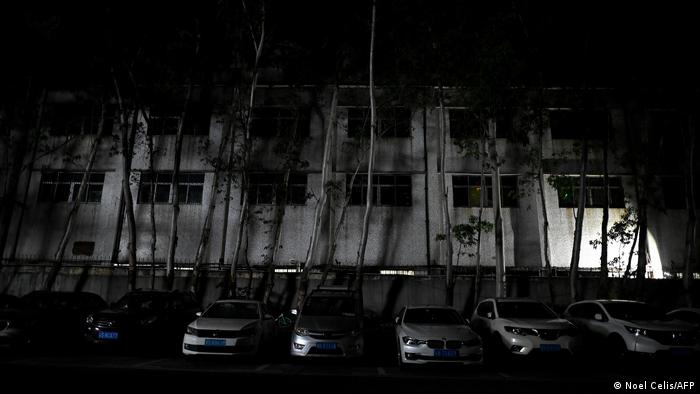 Some areas in China have recently been plagued by power restrictions

Struggling energy companies in China have cut off power to select Chinese industrial players in recent days as the high price of fuel pushes the firms to ration power supplies.

Coal prices rose to a record high on Monday after new figures showed the supply of fuel fell in September.

The need for power has skyrocketed on the back of China's economic recovery. In the first half of 2021, the demand for energy exceeded pre-pandemic levels, according to China's National Energy Administration. With colder months looming, matters are only getting worse.

Traffic lights and street lamps went dark in many cities in China in recent weeks. Sales of candles skyrocketed as millions of homes and businesses went without power. More than 20 people in the northeastern province of Liaoning were rushed to a hospital with carbon monoxide poisoning after ventilators at the factory where they worked shut off during a blackout, Chinese state broadcaster CCTV reported.

"If there's a power cut in the winter, then the heat stops, too," Fang Xuedong, a 32-year-old delivery driver in Liaoning province, told the news agency Reuters. "I have a kid and an elderly person at home. If there's no heat, then that's a problem."

Shortages currently plaguing Europe, the UK and now China can give the impression that a global energy crisis has begun. While some of their problems overlap, so far China is the only one this year to report widespread power outages. The disruptions prompted investment bank Goldman Sachs to cut its 2021 growth forecast for China.

The downside of a recovery

Blackouts aren't unheard of in China, where heavy consumption in the summer and winter months occasionally leads to power outages. But now the world's second-largest economy has been hit with soaring energy demand at a time when supplies are severely low.

The country's economy relies on exporting goods manufactured by its industrial sector. Demand for Chinese products has surged as economies around the world have reopened for business. China's focus on low-end products, like cheap electronics, is a particularly power-hungry endeavor.

Still, a spike in demand could have been anticipated as early as the winter of 2020, when global economic projections had forecast China to be the country with the strongest growth in 2021.

Going solar: I’ve got the power

China is the world's top consumer of coal and, unsurprisingly, the world's biggest producer of greenhouse gases. Beijing recently made reducing the country's carbon emissions a top priority, with the aim of reaching carbon neutrality by 2060. This led to the country curbing domestic coal production, even while over 70% of the country's electricity, according to Bloomberg, is still sourced from coal.

In the past, China might have procured more supplies from Australia. But Beijing stopped buying Australian coal last year over an ongoing geopolitical dispute. And natural gas supplies are low worldwide, making them highly sought-after and expensive.

So now coal prices are skyrocketing. Unlike in Europe, where consumers are worried about spiking heating costs this winter, utilities' prices in China are largely regulated by the government. This keeps power companies from passing on the cost to consumers and sticks the suppliers footing the high cost of the coal needed to generate electricity. To cope, many companies have opted to scale back production, curbing the country's supply of energy.

Some local governments, scrambling to meet their annual emissions targets, have also ordered plants to cut back, making matters worse. The renewable energy market in China, while growing, isn't yet large enough to pick up the slack.

Price hike in the cards

The government has now ordered major state-owned energy companies to ensure adequate fuel supplies for winter at all costs, Bloomberg News reported, citing people familiar with the matter. Analysts have speculated this pressure will lead to an even greater surge in commodity prices.

"They will bid whatever it takes to win a bidding war for a cargo of coal" or liquefied natural gas, Bjarne Schieldrop, analyst at Swedish bank SEB, told AFP.

The National Development and Reform Commission (NDRC), China's state planner, has also said it would consider raising power prices for industrial players, potentially discouraging energy consumption. It's a move that, after decades of cheap energy supplies, is likely to prove unpopular in business circles. The state planner has also vowed to moderately increase coal imports.

Experts say the crisis is likely to worsen in the months ahead. The extent will depend on how cold the winter is in China, which can significantly affect demand.

An energy crisis is only the latest in a series of major issues to make international headlines in China. In recent weeks, the country has caught global attention for restricting minors' access to the internet, banning cryptocurrencies and overseeing the near-implosion of a real estate giant that had many drawing parallels with the collapse of the US investment bank Lehman Brothers. The days of a reliably high-growth Chinese economy appear to fading into the past, giving way to a new economic identity that is still being forged.

This article was first published on September 30, 2021.