Chinese leaders are visiting Belgrade to advance projects such as their plan to turn Greece's port of Piraeus into a hub for China's trade with Europe. The talks involve 16 heads of central and eastern European nations. 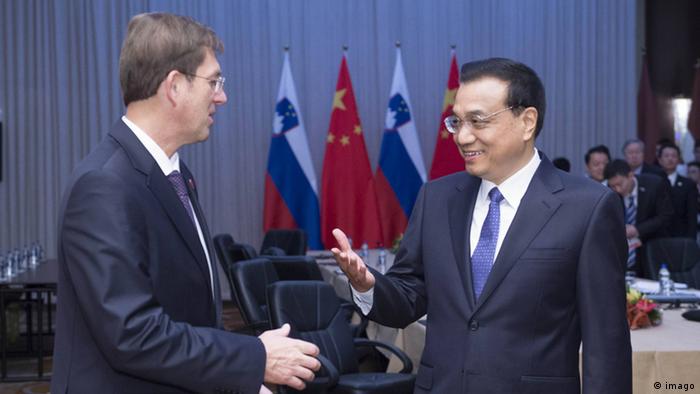 Chinese Prime Minister Li Keqiang began a rare visit to Serbia on Tuesday for a two-day regional summit to finalize plans for a new transport and shipping hub on Europe's eastern flank.

His visit coincides with economic troubles for Russia, the Balkan's traditional power broker, stemming partly from Western sanctions over Moscow's role in Ukraine.

Traveling with Li are 200 Chinese business executives. Another summit item is to be the signing of a deal for a high-speed train link between Budapest and Belgrade.

Among the European leaders who met Li was Slovenian Prime Minister Miro Cerar (pictured with Li, above).

Ahead of the summit Li told Serbian media that the concept was a "rapid land and maritime route" created by expanding Piraeus' port facilities and linking it by railroad.

"We will set a mid-term agenda to define our future cooperation and present financial measures that will facilitate it," Li said referring to China's abundant cash reserves.

The Chinese shipping giant Cosco has a 35-year concession to expand two container terminals at Piraeus.

Greece, despite its deep economic crisis, retains one of the world's largest merchant marine fleets, with China being one of its key customers.

According to Serbian officials, Beijing has earmarked 10 billion dollars (8 billion euros) for various projects in the Balkans, including telecommunications.

Li is due to remain in Belgrade until Thursday, when he and Serbian Prime Minister Aleksandar Vucic are to inaugurate a 226-million-dollar bridge on the highway ring around Belgrade.

The project, when first announced, was China's biggest infrastructure investment in Europe. China already has investments in power plant projects in Serbia and Bosnia.

The 16 CEE countries represented at the Belgrade summit all share a former communist past. Some, like Bulgaria, Romania, Poland and Hungary, are members of the EU. Others, like Serbia, have yet to satisfy accession rules.

Only a few weeks ago, Russian President Vladimir Putin announced that Moscow had halted the gas pipeline project Southern Stream from which several eastern European countries had hoped to earn transit fees.

In the first 10 months of 2014, bilateral trade between China and central and eastern European countries reached $50 billion, up 10 percent on the same period last year.