China, the world's second largest economy, has officially launched a development bank that could complement or rival the US-backed World Bank. Regardless, it highlights China's growing economic clout. 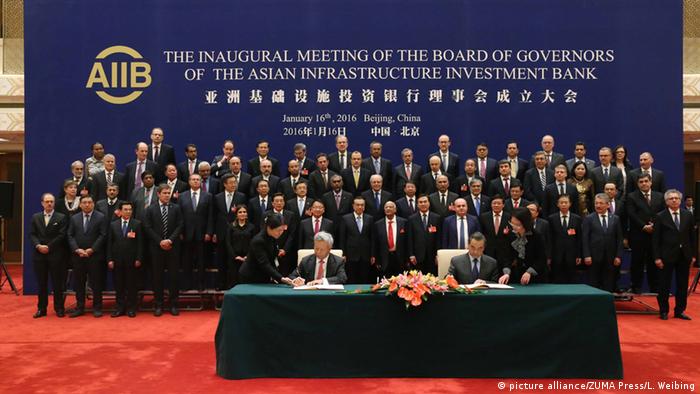 The new, Chinese-led, Asian Infrastructure Investment Bank (AIIB) was launched at the weekend amid much fanfare and high expectations in Beijing, while uncertainty lingers in Washington, Tokyo and elsewhere.

With a 30 percent stake in the bank, which is expected to have $100 billion (92 billion euros) in authorized capital, China is AIIB's largest shareholder.

"We already have a very good pipeline of co-financing projects (with other international development banks) and stand alone projects," the AIIB's inaugural president, Jin Liquin, who was previously a high-ranking official at the World Bank and Asian Development Bank (ADB), told journalists on Sunday.

But whether the bank will seek to work with other likeminded institutions such as the US-backed ADB and the World Bank, or become a rival to them, remained to be seen.

Earlier this month ADB President Takehiko Nakao said he did not think the AIIB would diminish his institution, adding the two organizations "can complement each other."

Washington and Tokyo refused to join the endeavor, fearing the ramifications of the enhanced influence China would have across Asia.

Speaking at a lavish opening event held Saturday in Beijing, Chinese President Xi Jinping said the development needs across Asia were so large that there was plenty of room for another investment bank.

"Asia's financing needs for basic infrastructure are absolutely enormous," Xi said, adding the bank would aim to invest in projects that were "high-quality, low-cost".

The bank plans to lend $15 billion per year, and could begin making loans as soon as the second quarter.

"The funding and inauguration of the AIIB will effectively boost investment to support infrastructure development in Asia," Xi said. "It will serve to channel more resources, particularly private investment, into infrastructure projects."

By not insisting on some free market economic policies recommended by the World Bank, the AIIB might avoid the criticism leveled against its rivals, which some say impose unreasonable demands on borrowers.

But the banks' skeptics aren't only its geopolitical rivals like Washington and Tokyo.

"There's a huge gap in the institutional mechanism," executive director Rayyan Hassan said. "I don't think there has been any face to face dialogue with civil society yet (and) the signs are not good."

A total of 50 nations have signed the founding charter of the AIIB, seen as a potential rival to US-dominated economic institutions such as the World Bank. How will the new body affect the global financial landscape? (09.07.2015)