China has launched two astronauts into space on a mission to dock with an experimental space station. The launch marks the latest stage in the country's developing space program.

The Shenzhou 11 mission took off from the Jiuquan Satellite Launch Center on the edge of the Gobi Desert in northern China at 7:30 a.m. on Monday morning (2330 UTC Sunday) aboard a Long March-2F carrier rocket.

On board the space ship are astronauts Jing Haipeng, who is flying his third mission, and 37-year-old Chen Dong. "It is any astronaut's dream and pursuit to be able to perform many space missions," Jing, who will celebrate his 50th birthday during his time in space, told a briefing Sunday.

Within two days, the spacecraft is due to dock with the Tiangong 2 space laboratory which was sent into space last month. The astronauts, also known as taikonauts, will spend about a month on board the experimental station which is the first stage in China's plans to set up a permanent manned space station by 2022. 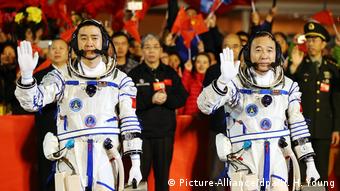 An earlier Tiangong 1 experimental space station was launched in 2011. It went out of service in March after docking with three visiting spacecraft and extending its mission for two years.

"This mission is characterized by its longer duration and more tests," Chen Dong told reporters in a televised news conference. "We will focus on improving our ability to handle emergencies in orbit, medical first aid, mutual rescue capabilities and space experiments."

China has said its space program is for peaceful purposes, but the US Defense Department has highlighted China's increasing capabilities, suggesting it was pursuing activities aimed at preventing adversaries from using space-based assets in a crisis.

However, on Monday, the US space agency NASA extended its congratulations via social media.

China was prevented from taking part in the International Space Station because of US concerns about the military character of its programs.

Chinese officials are reported to be offering to finance the missions of other countries to the Tiangong 2 space laboratory.

A fourth spacecraft launch site was opened at Wenchang on China's southernmost island province of Hainan in June.

The space program has planned 20 missions for this year, and aims to land a rover on Mars by 2020.

China has announced it will launch two taikonauts who will dock with its new orbiting space laboratory. The Shenzhou 11 mission is slated to launch early Monday morning from a remote northwestern province. (16.10.2016)

The telescope, nicknamed the "Eye of Heaven," has started its grand search for extraterrestrial intelligence. Beijing has launched a multifaceted military-backed space program to explore the final frontier. (25.09.2016)