A Chinese court has sentenced three anti-corruption activists to lengthy jail terms. The three had been urging government officials to publicly disclose their assets. 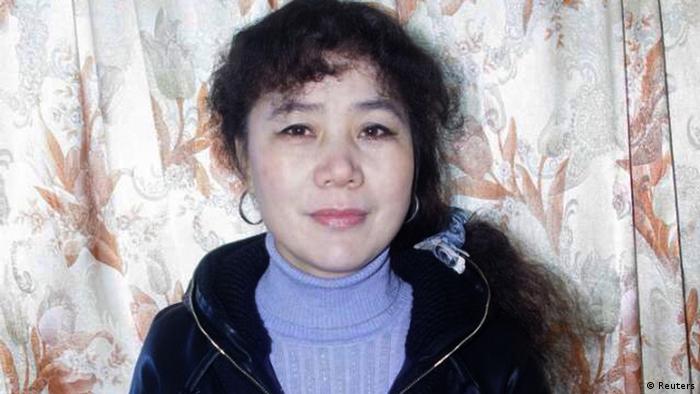 The court in the central province of Jiangxi on Thursday sentenced Liu Ping (pictured above) and Wei Zhongping to six and a half years in prison after convicting them of "using evil religion to sabotage law enforcement" and "picking fights and provoking trouble." The third activist, Li Sihua, was convicted only of the latter charge and handed a three-year sentence.

The charges against the trio stem from a photo circulated via the Internet last year, which showed the three activists holding a banner calling on government officials to disclose their assets as a way of combating corruption.

All three are members of a loosely knit group of activists known as the New Citizens Movement.

The case could still be appealed, but one of the activists' defense lawyers indicated that the chances of getting the convictions and sentences overturned were not promising.

"It isn't fair, it isn't just," Si Weijiang, Liu's lawyer told the Reuters news agency. "The laws can just be bent however (the government) wants in politicized cases."

Criticism of the rulings

The court's decisions were criticized by human rights organizations.

"Having a small private gathering and holding a banner in a lobby entrance demanding financial transparency from officials should not in any way constitute 'picking quarrels' and 'illegal assembly'," a statement released by William Nee, a China researcher for Amnesty International said.

The sentences imposed on Liu and Wei were significantly longer than the four-years handed to one of the group's founders, Xu Zhiyoung back in January. Several other activists linked to the New Citizens Movement have also been jailed.

The clampdown on the activists comes despite the fact that President Xi Jinping has himself pledged to combat graft.

The sentencing of the three on Thursday were just the latest blows to the Chinese activist community, after many were detained in the run-up to the 25th anniversary of the bloody crackdown on pro-democracy protesters at Beijing's Tiananmen Square, earlier this month.

A Chinese court has sentenced former mining tycoon Liu Han to death. He was found guilty of "organizing and leading a mafia-style group" in a case linking politicians to organized crime. (23.05.2014)

Rights lawyer: 'No true rule of law in China'

While visiting China, German economy minister Sigmar Gabriel had scheduled a meeting with human rights lawyer Mo Shaoping. In an interview with DW, Mo claims he was prevented from attending by the powers-that-be. (25.04.2014)