″China is Going to Overtake Germany In the Next Few Years″ | Germany| News and in-depth reporting from Berlin and beyond | DW | 13.09.2006

"China is Going to Overtake Germany In the Next Few Years"

Former German Chancellor Helmut Schmidt will hold talks with Chinese Premier Wen Jiabao during a summit in Hamburg. DW-WORLD.DE spoke with Schmidt about his ties to China and the country's growing global clout. 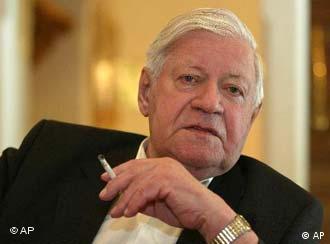 Helmut Schmidt, a Social Democrat, was the first German chancellor (during his 1974-82 terms) to travel to China. He has been there over 10 times since then. DW-WORLD's Zhu Hong spoke with him about modern China.

DW-WORLD: Mr. Schmidt, you visited China in 1975 and met with Mao Tse-Tung, the chairman of the People's Republic of China. What was your impression of him?

Helmut Schmidt: It was evident that he had suffered a stroke and couldn't speak clearly anymore. He spoke Chinese and three different interpreters translated for him, but sometimes they just couldn't understand him. They occasionally had to discuss what they thought he had said, then write it down on paper and show it to him for him to accept or reject it and perhaps correct it. He was quite debilitated by the stroke.

What made you visit Communist China?

I was invited by Zhou Enlai (premier of the People's Republic of China from 1942-1976) and felt it was right to accept the invitation. But when I arrived in Beijing, Zhou Enlai had already fallen ill, so I was welcomed by Mao and particularly Deng Xiaoping (who was China's de facto leader in the late 1970s and again in the 90s). I spoke with Deng Xiaoping quite a lot -- for several hours over several days.

What were the results of those talks?

Actually, it was the talks later, during the 1980s, that I had with Deng that were so important. Mao was already dead by then. Deng was a free man and the leading intellectual and politician in China then, even though he did not hold an official top post. Hua Guofeng (Chinese premier from 1976-80) and others held those posts, but Deng was the decisive figure. Deng Xiaoping made a deep impression on me. He was a man with a unbelievably good understanding of economics. China's whole economic upswing over the past 20 years is primarily due to Deng Xiaoping. 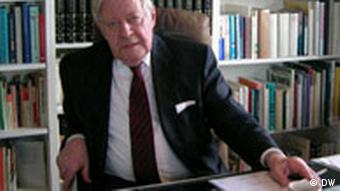 During your many trips to China, you have often sought the company of Chinese intellectuals. Do you have plans to seek them out in the future?

I have met a variety of people, including Jiang Zemin (general secretary of the Communist Party from 1989-2002), Li Peng (premier from 1988-1998), Zhu Rongji (premier from 1998-2002) and Hu Jintao (current president of the People's Republic of China). I found Zhu to be an unbelievably capable man. I have met Hu Jintao only fleetingly.

I have met with Wen Jiabao (China's current premier) twice -- once in Berlin, and once in Peking. I will now be meeting with him a third time. He appears to be cautious in terms of foreign policy, but very goal-oriented regarding economic and social policies. He's made a good impression on me.

When I have been to China, though, I have not only spoken with government leaders and foreign ministers. I also like to talk to "normal" people, and will continue to do so on my trips there.

Mao died 30 years ago. How do you think he influenced history -- both in China and the world?

He did a great deal for China in terms of freeing it from Japan, but he also made major mistakes. The first was the "Great Leap Forward" (Mao's attempt to modernize China's economy), which caused millions of people to starve to death because they were working in back-yard production plants rather than harvesting crops. The second mistake was the "Hundred Flowers" campaign, and the third was the Cultural Revolution. If I were Chinese, I would not underestimate these mistakes.

Mao's influence abroad was largely limited to leftist students in Western Europe and the US. From today's perspective, his influence in the rest of world was minimal. 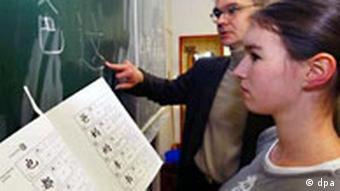 More and more Germans are learning Chinese in school

Your book Nachbarland China (Neighboring China) will be published at the end of this month. You have written about China's economic boom. How will it change the world?

Thirty years ago, no one would have expected China's economy to develop so rapidly. Even 15 years ago, it was unimaginable that China was on its way to becoming the world's third more important economy. Though Germany currently holds that position after the US and Japan, China is going to overtake Germany in the next few years, and Japan probably within 15 to 20. It's a miracle, really. There has never been such a phenomenon in the world's history.

In terms of China's impact abroad, it's still unclear. In the last four or five years, China's demand for oil, gas, steel and other raw materials has driven up prices on the global market. Chinese exports have caused greater competition for some European and US industries. Some people resent China for that. I think that's wrong: for those who believe in competition, they have to accept new competitors on the market -- just as people had to with Japan over 100 years ago, or South Korea, Taiwan or Hong Kong 40 years ago. But now the People's Republic of China has come along and the West feels uneasy. Morally speaking, the uneasiness is not justified.

What would you like to achieve with your book?

I feel very strongly that people in Western Europe and in my own country, Germany, must accept that it is in our own interests to foster a good, neighborly relationship with China.

They are very different in many ways, but what they have in common is that both have increasingly become market economies. In Germany, even more so; in China, that's still a relatively new development. But otherwise, the differences are immense. Germany has a very extensive public welfare system -- for old people, for the ill and unemployed. China, on the other hand, is just beginning to develop a social welfare state. It will be quite a while before China has a sufficient pension and unemployment benefits system. 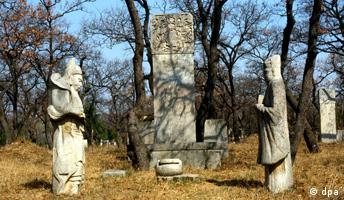 Confucius's grave: "His teachings should live on as a balance to capitalism"

I would like to add something else: I could have said "capitalistic" here rather than "market economy." Capitalism as an economic form poses dangers, particularly tensions within society. In the US and even more so in Western Europe, the dangers of a capitalistic society are held in check through some democratic governmental regulations and through public welfare systems. That is not the case in China at the moment. It seems to me that a return to the principles of Tao and Li (Tao: Chinese for "the way;" Li: "social propriety," or a kind of code of ethics found in Confucianism) will be of central importance for controlling capitalistic development in China. I would welcome that as a way of keeping the effects of capitalism in balance.

Your opinions on China often differ from those of the mainstream. What do you think about China's one-party system and it policies regarding Taiwan?

There has never been an opposition party in China's 3,000-year-old history. I don't practice that type of Western criticism. China must decide itself what is best; that is not something for foreigners or the West to dictate.

As a foreigner, I have an interest in China behaving peacefully, and it does that. Whether it is Taiwan, North Korea, the bombing of the Chinese embassy in Belgrade or the collision of an American and a Chinese plane, the country has behaved very cautiously. In my opinion, criticizing China's foreign policy is neither wise nor appropriate. On the contrary, if all the world powers were to be more prudent in their foreign policies, the world would be more peaceful.

What is your opinion of the death penalty in China?

The death penalty is legal in many countries around the world. I do not want it in my own country, but it is not peculiar to China alone. I do not want to comment on that because it is none of my business. Some journalists and politicians are mistaken when they believe they must solve China's problems. I do not agree.

EU Tells China Not to Step on its Toes

The EU has again taken up the import fight against China by placing a tariff on leather shoes. The surcharge, to be phased in gradually, has not found favor in China, but Europeans are also unhappy. (Apr. 9, 2006)

Chinese President Hu Jintao begins a four-day visit to Germany on Thursday. Economic matters are set to dominate talks, but some are calling for German leaders to address China's human rights and environmental record. (Nov. 10, 2005)

It's "China Time" in Hamburg -- a city with a long history of Chinese ties and the "China meets Europe" summit set to take place from September 13-15 will be attracting an elite guest list from China and Europe. (Sept. 13, 2006)