The People's Bank of China has set the country's currency to its lowest level since February 2011, following remarks by the US central bank chief that an interest rate hike may be imminent in the coming months. 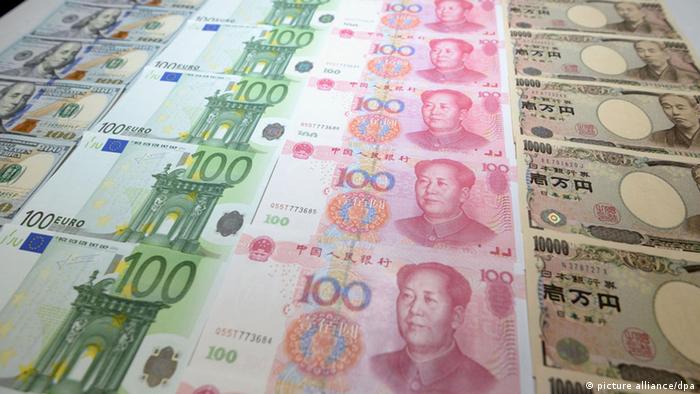 The People's Bank of China (PBoC) fixed the yuan's exchange rate for $1 at 6.5784 yuan on Monday, down 0.45 percent from its fix on Friday, according to data released by the China Foreign Exchange Trade System.

The PBoC strictly controls trading in yuan - also called renminbi - and sets a daily middle point from which the currency can trade up or down 2 percent each day.

Monday's fix meant that the currency was allowed to trade around its lowest level since February 2011, resulting in the yuan dropping 0.35 percent from Friday's close.

Song Yu, China economist for Goldman Sachs told Bloomberg News that he expected the yuan to depreciate gradually over the next few weeks. "The main driver for the decline will be a stronger dollar on the back of the expectation that the Fed will raise interest rates," he said.

First US rate hike in almost a decade

On Friday, US Federal Reserve Chair Janet Yellen suggested in a speech at Harvard University that interest rates could be lifted soon. An increase in the benchmark US interest rate would be appropriate "probably in the coming months" if economic data continued to strengthen.

This would be the second rate hike since the US Fed ended nine years of ultra-low interest rates last December by raising them by 0.25 percent. The central bank's next opportunity to do that is on June 15, when its Open Market Committee holds a scheduled meeting.

The prospect of strong increases in US interest rates has put emerging economies on edge as they fear outflows of foreign capital and rapid depreciation of their currencies.

In the case of the yuan, which is pegged to the US dollar, a stronger US currency would hurt Chinese exports. To counteract such an effect, Beijing launched a first round of yuan depreciation in August last year. However, guiding its currency lower by a staggering 5 percent rattled global markets, raising concerns about the health of the Chinese economy.

On Monday, the PBoC said in a statement that it would strive to keep the yuan "basically stable" as it adhered to "market-oriented reform" of its currency regime, including a more liberalized yuan trade.