China has commemorated the 69th anniversary of Japan's surrender at the end of World War II in Beijing. Making a public appearance, Chinese President Xi Jinping asked Japan to take "responsibility for history." 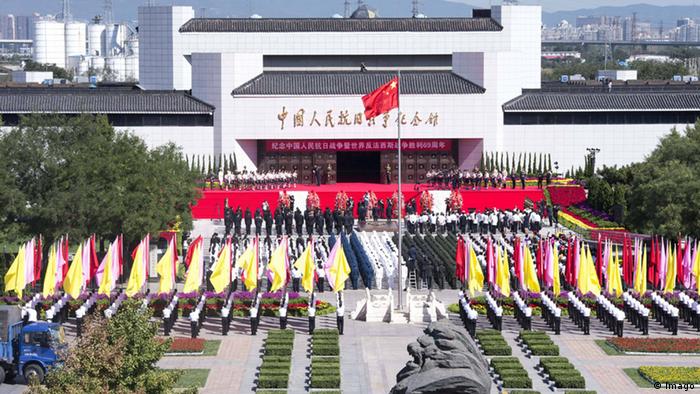 At a ceremony marking 69 years since China's victory over Japan in the Second World War on Wednesday, China's president, Xi Jinping, publicly criticized Japan's failure to accept responsibility for war crimes it committed. He was speaking as people in Hong Kong clashed with police over Beijing's revocation of democratic rights.

Hundreds of people including veterans and schoolchildren gathered at what is known as the "Museum of the War of the Chinese People's Resistance against Japanese Aggression" near the Marco Polo Bridge, on the edge of Beijing.

It was there that a dispute between Chinese and Japanese troops in 1937 resulted in full-scale war, until Japan signed the formal surrender on board the USS Missouri in Tokyo Bay on September 2, 1945.

Opening the ceremony on Wednesday, Prime Minister Li Keqiang asked the Chinese citizens to "pay a silent tribute to martyrs who bravely sacrificed their lives." 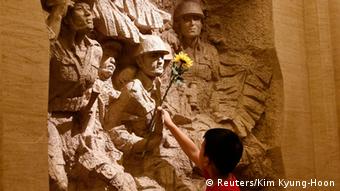 As a sign for China's desire for world peace doves and balloons were released at the event. Along with all six members of the country's most powerful body, the Politburo Standing Committee, Xi also later presented seven flower baskets in front of sculptures of "martyrs" inside the museum.

Almost seven decades on, China and Japan remain embroiled in bitter territorial disputes over islands in the East China Sea. This has caused a rise in nationalism in both East Asian countries, with Beijing earlier this year declaring September 3 as a national day to commemorate their victory over Japan.

Speaking at the ceremony, Xi said Tokyo needed to "admit and reflect on its history of militarist aggression."

"China will never allow any denial and distortion of this history of aggression or any return to militarism," Xi said, according to the Chinese news agency Xinhua.

"Japan must show a sense of responsibility for history, the region's people and the future," Xi added.

In southern China however, there were clashes in Hong Kong between protesters and police outside a venue where the anniversary was also being commemorated.

Protesters have taken to the streets following Beijing's decision last week to rule out open nominations for the election of Hong Kong's chief executive in 2017. After being returned to China in 1997, the former British colony was promised freedoms and autonomy not permitted in mainland China.